The pace of US applications for unemployment benefits slowly retreated again last week, with new claims totalling 1.31m as businesses continue to grapple with the fallout from the spread of coronavirus.

Jobless claims edged down from the revised 1.41m reported during the week before, according to the US labour department. It was the 14th consecutive week that seasonally adjusted first-time claims have fallen since hitting a peak of 6.9m in late March, although the decline had been gradual in recent weeks. Economists had forecast 1.38m claims last week.

The number of Americans actively collecting unemployment cheques receded more than expected but remained above 18m, reflecting how lay-offs have continued even as many employers rehire workers.

Continuing claims totalled 18.1m for the week ending on June 27, down from 18.8m a week earlier and equivalent to 12.4 per cent of the workforce. This so-called insured unemployment rate, which was 12.9 per cent the week before, is considered an alternative measure of joblessness.

Covid-19 infections in areas outside early hotspots in the US north-east have climbed in recent weeks, raising the prospect of a rockier economic recovery than had been hoped, following back-to-back months of strong jobs gains and data showing rebounds in consumer spending and manufacturing.

States including Texas, California and Florida — the three most populous in the US — tapped the brakes on their reopening plans after reporting a rise in cases. In California, the governor ordered bars and restaurants to close in the worst-affected counties. Texas and Florida have also closed bars again.

“While the June jobs report and the May JOLTS data confirmed the healing process began in the labour market, the claims data remind us that job losses remain widespread,” economists at Oxford Economics said. 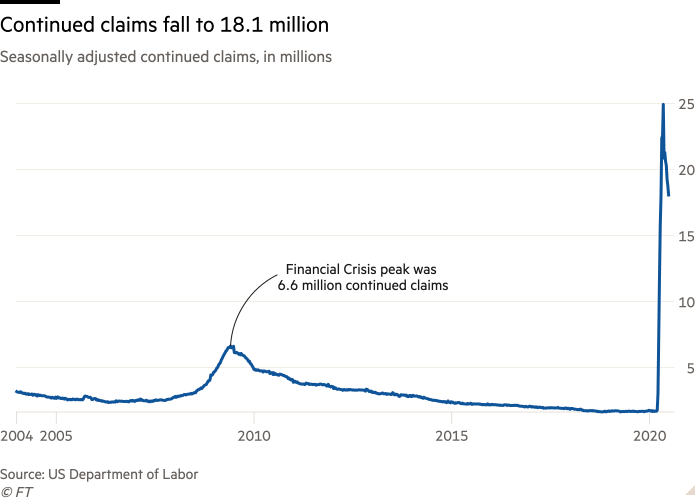 Economists have noted that weekly figures for new claims are also being propped up by a backlog in applications. State unemployment offices were flooded with claims at the start of the coronavirus shutdowns, causing delays.

Texas registered the biggest jump in initial claims for the week ending on July 4, closely followed by New Jersey, based on unadjusted advance figures for each state. Claims slowed the most in Indiana, Florida and Georgia.

The federal Pandemic Unemployment Assistance programme, which extended aid to the self-employed or other individuals who would not qualify for regular unemployment compensation, tallied more than 1m new claims on an unadjusted basis, up from 996,842 a week earlier.

US stocks edged higher on Thursday, with the benchmark S&P 500 up 0.2 per cent. The Nasdaq Composite rose 0.7 per cent, a day after the tech-heavy index notched its fourth record close in five sessions.

“We are reaching the levels of unemployment which are likely to persist until a more true reopening can occur, either with a vaccine, novel treatment, or time,” said Jamie Cox, managing partner for Harris Financial Group.

The US added 4.8m jobs in June to drive the unemployment rate down to 11.1 per cent from 13.3 per cent, the labour department said last week. The leisure and hospitality industry, one of the sectors hit hardest by the shutdowns, contributed about two-fifths of the increase in non-farm payrolls.

Overall, 17.8m people were unemployed in June, down 3.2m from the prior month but up 12m since February, the month before coronavirus shutdowns began.