Greetings from Tokyo. The big trade prize left on the agenda for the year is the huge, pan-Asian Regional Comprehensive Economic Partnership, which participants say is largely complete. Before completing that deal, however, Japan had time for an aperitif in the form of a UK-Japan deal, agreed in record time to be ready before the transition period between the UK and the EU ends.

Overall, the UK-Japan deal marks a strong start for the UK’s trade negotiators. Despite time pressure and inexperience, they reached an agreement that broadly maintains existing EU-Japan arrangements. In areas such as agricultural quotas, however, the UK needed new concessions from Japan just to maintain the status quo and had to settle for a dubious compromise instead. Today’s note looks at what access UK farmers will have to the Japanese market. Our policy watch examines the waning prospects for a quick UK-US trade deal, while our chart of the day focuses on how manufacturers are adjusting their supply chains away from China.

As is so often the case in trade negotiations, the toughest issue in recent talks between the UK and Japan was agriculture. The UK wanted quotas to sell foodstuffs such as cheese, replacing those it will lose when it leaves the EU. Tokyo went into the negotiation promising its farmers there would be no new quotas. It was quite a conundrum, but nothing a wily trade negotiator could not handle.

The deal agreed with the UK allowed Japan’s foreign minister Toshimitsu Motegi, right, to declare there were ‘no new quotas’ © REUTERS

The solution the two sides came up with is unusual: for 10 out of the 25 tariff rate quotas in the EU-Japan deal, the UK will be able to use any quota left over by the EU. For example, if the EU cheese quota is 20,000 tonnes, and Japan imports only 18,000 tonnes from Europe, then the UK will be able to use the remaining 2,000 tonnes. That allowed Japanese foreign minister Toshimitsu Motegi to declare there were “no new quotas” while London said proudly, “We will continue to benefit from access to the low tariffs for key food and drink products covered by quotas, such as Stilton cheese.”

In theory, everyone is happy — but the agreement begs a question: will there be any unused quotas left over for the UK? Though it is impossible to say for certain, and will vary year by year, several of the most attractive quotas are already fully used. The UK’s cheesemongers risk finding that their tasty new treaty has mould on it.

The EU-Japan deal creates a soft cheese quota that gets bigger every year while the tariff rate applied to it gets lower. In year one, the EU can export 20,000 tonnes of cheese to Japan with a 27.9 per cent tariff (compared with a normal tariff of 29.8 per cent). By year 10, that is 26,100 tonnes at an 11.2 per cent tariff, and by year 16 it is 31,000 tonnes tariff-free. With every year that goes by, therefore, there is more space in the quota but using it becomes more attractive.

The quotas in the deal follow the Japanese fiscal year from April to March and the treaty is now in year three of implementation. In 2019, there was indeed space left in most of the quotas. Only 11,858 tonnes of EU cheese were imported under the deal compared with 20,600 tonnes of available quota. Not a single tonne of the huge quota for malt was used. The only goods that took up all the available quota in the EU-Japan deal were butter and milk powder. That space is no doubt why the compromise worked for the British and Japanese negotiators.

So far in 2020, however, the 21,200 tonne quota for cheese is already fully allocated and so are the quotas for butter, skimmed milk, cake mixes and tea and coffee preparations. Just 2,406 tonnes of cheese quota was handed back for reallocation in September, when it was 1.3 times oversubscribed. UK producers will have to wait and see whether some of that still goes unused at the end of the year.

In 2019, that did happen, but the situation highlights the vagaries of the mechanism. Will UK producers have to wait until the very end of the year and rush to use any remaining quota? Will they be automatically allocated quota left over from 2020 to use in 2021? Will any Japanese importer buy from Britain with such uncertainty about tariffs from year to year? Overall, Japan imports more than 100,000 tonnes of cheese a year from Europe. As the tariff rate within the quota falls, Japanese consumers are likely to find it is French Roquefort filling their shops, not British Stilton.

Driven by President Donald Trump’s push to “decouple” the US economy from China and the disruptions caused by the coronavirus pandemic, many manufacturers are being forced to rethink their presence in China, writes Kathrin Hille. At a time when tensions between Washington and Beijing are increasingly beginning to resemble a new cold war, products ranging from computer servers to the Apple iPhone could end up having two separate supply chains — one for the Chinese market and one for much of the rest of the world. Contract manufacturers of servers such as Taiwan-based Quanta Computer have started moving some production back home and some to the US or Mexico. 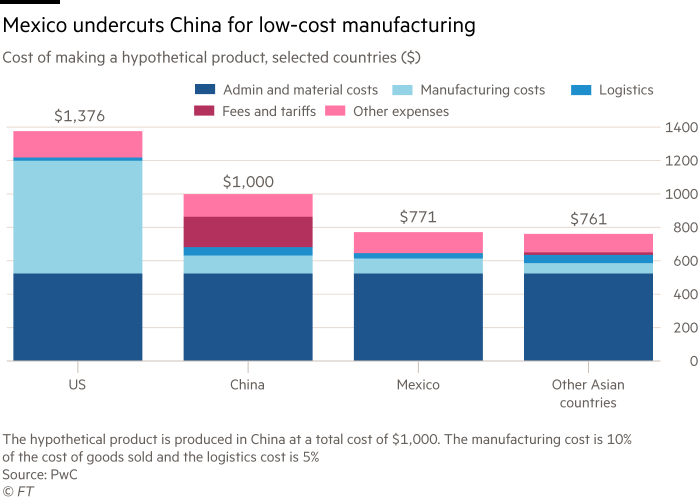 Lauded as one of the great prizes for post-Brexit Britain, leading figures in Mr Trump’s administration were promising in February that a US-UK trade deal was “top of the list” of priorities. But UK trade secretary Liz Truss admitted in July there would not be a deal any time soon. Now, almost eight months later and after four rounds of talks, officials and trade experts acknowledge that a long road still lies ahead.

UK hopes of clinching a deal with Mr Trump before the presidential election — now plunged into turmoil by the president’s coronavirus diagnosis — have quickly faded. While officials on both sides speak positively of the progress made so far, they acknowledge the difficulties of conducting trade negotiations largely online due to restrictions imposed by the pandemic. Furthermore, the most contentious issues around agriculture and food standards, market access for US drug companies, and rules of origin are only in the very early stages of being discussed.