Donald Trump has dramatically ramped up his campaign against Beijing by sanctioning Chinese and Hong Kong officials and barring US companies from doing business with high-profile Chinese technology groups.

The Trump administration imposed sanctions on 11 Chinese and Hong Kong officials, including Hong Kong chief executive Carrie Lam, in response to China’s enactment of a draconian security law in the financial hub.

The unprecedented sanctioning of Hong Kong officials came hours after Mr Trump issued two orders that banned US companies from dealing with WeChat, the messaging app owned by Tencent, and ByteDance, the owner of TikTok, a hugely popular video app that Microsoft is in talks to buy.

The dual moves mark a serious escalation in the US effort to push back against China over everything from its economic practices and espionage to alleged human and civil rights abuses from Xinjiang to Hong Kong.

We are entering the Twilight Zone of US-China relations

The Trump administration on Thursday also announced recommendations that propose delisting Chinese companies from US stock exchanges unless China allows US regulators adequate access to their audited accounts.

“It is a bizarre moment in the relationship because it appears that the Trump administration is actively trying to engineer a strategic confrontation, and Beijing is saying ‘can’t we all just get along’,” he added.

Even before the latest US actions, the China-US relationship had deteriorated to its worst state since diplomatic relations were established four decades ago, Wang Yi, Chinese foreign minister, said recently. Mr Trump at one point threatened to sever all relations with the country.

During his first three years in office, Mr Trump took a harsh stance towards China on trade in an effort to reduce the trade deficit. But he resisted pushes from his national security team to strike a tougher tone over issues such as Chinese telecoms company Huawei and human rights abuses against Uighurs in Xinjiang, as he was worried about derailing trade talks.

Following the completion of a narrow phase-one trade deal earlier this year and the outbreak of the coronavirus, which originated in Wuhan, Mr Trump has shown a greater willingness to crack down further.

In an effort to deflect criticism over his handling of the pandemic in the US, Mr Trump has repeatedly blamed Beijing for unleashing the “China virus”. Most experts believe he will continue to pile pressure on the country as he runs for re-election against Democratic candidate Joe Biden, in a bid to boost his waning popularity with voters.

The sanctions come on the heels of the move to revoke the special trade relationship Hong Kong has enjoyed with the US. US officials said that the city no longer has the autonomy it was supposed to retain under the “one country, two systems” model, which underpinned the return of the former British colony to China in 1997.

The financial centre has been roiled by pro-democracy protests, which China has moved to suppress with the sweeping security law.

“The Chinese Communist party has made clear that Hong Kong will never again enjoy the high degree of autonomy that Beijing itself promised to the Hong Kong people and the UK for 50 years,” said Mike Pompeo, secretary of state. 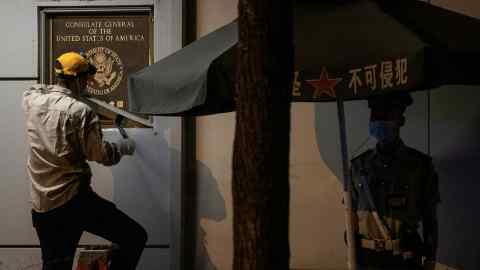 The US last month took the extraordinary step of closing China’s consulate in Houston, claiming it was at the heart of Chinese spying efforts in the US. Beijing responded by closing the US consulate in Chengdu.

Washington has in recent months imposed sanctions on mainland Chinese officials over human rights abuses in Xinjiang and Tibet, but those acts were in some ways symbolic, since the officials had few ties to the US.

Bonnie Glaser, a China expert at the Center for International and Strategic Studies, said the Trump administration was now “on a tear” against China. She said the sanctions on the Hong Kong officials went beyond symbolism because they could have potential ramifications for banks in Hong Kong.

Leigh Hansson, a partner at Reed Smith, said targeting Ms Lam amounted to the “most significant ratcheting up of tensions” between the US and China in recent months since the US rarely sanctioned a head of government. She said the sanctions would also raise concerns for banks.

“I wouldn’t be surprised if all the banks were squirming and saying, ‘what do we do?’” said Ms Hansson, who added that many non-US entities would be “very hesitant” to engage in transactions related to the 11 officials.