The government is urging struggling rural broadband customers to apply for cash it has set aside to pay for ultra high-speed connections.

Digital Minister Matt Warman said £70m is “still there for the taking”.

The gigabit voucher scheme is part of the government’s election pledge to bring broadband speeds of up to 1,000Mbps to the whole country by 2025.

It says nearly half a million homes have been connected with the help of government subsidies.

The average UK broadband speed is around 64Mbps (megabits per second), according to the latest Ofcom figures.

Mr Warman said the 2025 target was ambitious and he could commit only to “getting as close as we can”.

“We’re talking about a target that’s five years away. We are absolutely confident that we are doing all the right things,” he said.

The total number of “gigabit capable” premises in the UK is now 7.5 million – roughly a quarter of the country, the government says. Commercial firms are responsible for the vast majority,

“That’s huge progress – we can keep making sure that we make the same kind of progress up to 2025 and beyond,” Mr Warman said.

‘As remote as you could possibly be’

Belinda Huckle lives and works in the same building in the Yorkshire Dales, and says the gigabit voucher scheme has been “transformative”.

“There’s a lot of sheep, a lot of hills and it’s about an hour round-trip just to get milk. So we’re pretty much about as remote as you could possibly be,” she says.

Remote, hard-to-reach areas are being prioritised


“More often than not, we would get up really early and the internet would be down.

“And to mitigate that we would have to drive a few miles to a lay-by and sit in a lay-by in the dark with our laptops, hot-spotting into our phones in order to basically conduct business pretty much in the middle of the field.”

After applying for the gigabit voucher scheme, she now has a reliable service – and speeds that went from below 20Mbps (when it worked) to 850Mbps.

Ms Huckle said the scheme had been excellent – but that government’s messages needed to be clearer.

“The Facebook advertising is very misleading, and it’s confusing because people think that they’re suddenly going to get 15 hundred quid in their pockets… It doesn’t work like that.”

After applying, however, she says the whole process is “really frictionless”.

The scheme exists because it’s not always commercially viable to dig up roads and fields to supply good broadband to some remote places.

If you live in a rural area and have average or poor broadband speeds, the scheme allows you to apply for up to £1,500 for personal homes, and £3,500 for businesses, to install a new connection.

But the cash is not handed over to individuals – instead, you will have to contact a broadband supplier in your area to handle the subsidy.

The Department for Digital, Culture, Media and Sport says it has already handed out 45,000 vouchers, worth more than £90m – although only 29,000 of those connections have so far gone live.

The larger part of the government’s investment in broadband infrastructure is a £5bn fund promised for the nationwide rollout – but suppliers do not know how it will be allocated. 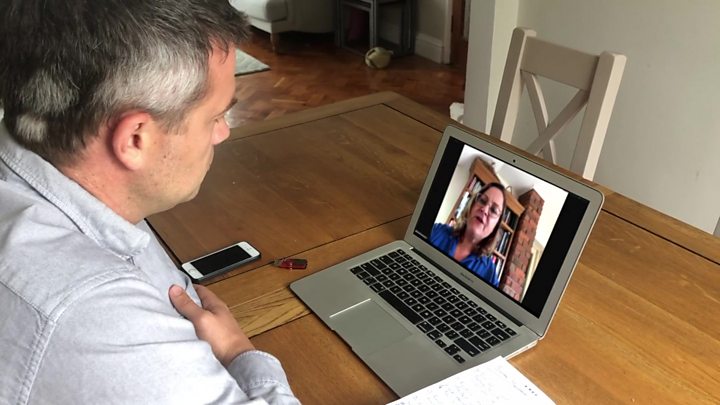 The head of BT’s Openreach infrastructure division recently warned that suppliers “need that plan now” if the government is to hit its 2025 target.

Ispa said that the government needed to take “urgent action” to break down barriers to the rollout.

The Covid-19 pandemic has also caused problems. Its members “have had very different experiences, depending on where they are… across the country,” it said.

Mr Warman also said that while the focus was on rural connections, some areas that “have not kept up” in the largest cities were also being looked at.

“We completely get that there are urban and suburban areas that are commercially viable, but there are parts that are not yet where they need to be – and it has to be a focus,” he said.