The UK economy grew the fastest in the third quarter, but the recovery was weaker than the US and the euro zone and remains threatened by recent lockdowns.

British economic output rose 15.5 percent in the third quarter compared to the previous three months. This is the fastest pace since records began in 1955, according to the Bureau of National Statistics.

Despite the recovery, the economy remained 9.7 percent smaller than in the last pre-pandemic quarter of 2019.

The UK economy has contracted more dramatically than the US and the eurozone, where production from July to September was 3.5 percent and 4.3 percent lower, respectively, than the last three months of 2019.

Following the release of GDP data, the pound fell against the dollar to the lowest level for the day. It was trading 0.3 percent at $ 1.318 early Thursday morning, having topped $ 1.33 on Wednesday for the first time since early September.

A full recovery is critical to business and job survival, but many economists believe the national lockdown, which went into effect on Nov. 5, will cause the economy to contract again this quarter.

Rishi Sunak, Chancellor of the Exchequer, said: “Today’s figures show that our economy recovered in summer but is slowly moving into autumn. The steps we’ve had to take since then to stop the virus from spreading mean that growth has likely continued to slow since then. “ 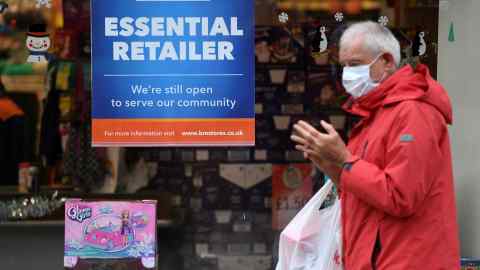 The expansion in the third quarter reflected the reopening of the economy after the record decline in the second quarter triggered by the pandemic, but was slightly below the 15.8 percent increase forecast by Reuters polled economists.

The monthly GDP numbers showed that growth had already slowed in September and production was only 1.1 percent higher than in August after the previous monthly data rose 2.2 percent.

The dominant service sector lost momentum, where monthly growth slowed from 2.4 percent in August to 1 percent.

According to its latest forecasts, the Bank of England does not expect the prepandemic to be reached in Great Britain until the first quarter of 2022.

The predictions were released before a major breakthrough in Covid-19 vaccine development by Pfizer and BioNTech was announced this week. The news sparked a euphoric reaction in the stock markets, but many scientists warn that a usable vaccine is still a long way off.