Indonesia has turned to US private equity firms such as Blackstone and Carlyle to participate in a new sovereign wealth fund. This is a test of investor interest after the country passed major reforms last month.

The fund, which aims to raise up to USD 15 billion, will also be the first serious measure of the international appetite for such vehicles in the region after the billion-dollar 1MDB corruption scandal in neighboring Malaysia.

The charm offensive by Luhut Pandjaitan, Indonesia’s minister for maritime affairs and investments, comes as Jakarta tries to boost foreign investment and counter the effects of the coronavirus that has hit Southeast Asia’s largest economy.

Other firms Mr. Luhut approached for the fund on a trip to the U.S. last week included BlackRock, EIG Partners, Global Infrastructure Partners, Stonepeak, I Squared Capital and JPMorgan, according to the Indonesian Department of Maritime Affairs and Investments .

While some were interested, after the 1MDB fiasco, they remain reluctant to invest in emerging market SWFs. Some are also waiting for more details on the SWF to be finalized.

Indonesia’s Minister for Maritime Affairs and Investment, Luhut Pandjaitan, has reached out to US investors like BlackRock and Blackstone © Reuters

Adam Boehler, chairman of the board of directors of the US International Development Finance Corporation (DFC), signed a letter of interest that, according to Indonesia’s Department of Maritime Affairs and Investments, could lead the DFC to invest $ 2 billion in the SWF. The DTC did not respond to a request for comment.

BlackRock, Blackstone, Carlyle and JPMorgan employees had preliminary discussions with Indonesian officials, according to people with direct knowledge of the matter.

I Squared confirmed that it practically met with Indonesian officials to discuss SWF and infrastructure investment opportunities in the country. JPMorgan, Blackstone, Carlyle, BlackRock and a spokesman for EIG Partners declined to comment. Global Infrastructure Partners and Stonepeak did not respond to requests for comment.

Some of the US fund managers involved in the talks said they were tentative and there was no guarantee they would invest.

The Indonesian Investment Authority, as the SWF is called, will target infrastructures such as toll roads and power grids. Indonesia will provide the SWF with USD 5 billion.

The fund is part of an economic reform package that includes the comprehensive collective law passed in October that revises several dozen tax and labor laws.

However, some investors said the 1MDB scandal was freshly remembered. The US Department of Justice alleged that $ 4.5 billion from this fund was misused to buy luxury real estate, jewelry and precious art.

“The reputational damage could be enormous,” warned a fund manager if investments in the SWF went sour or sparked controversy. 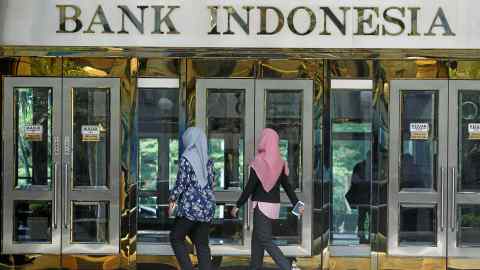 However, Wellian Wiranto, an economist at OCBC, said the fund could be “a positive move” as it would have broader control over a “plethora” of infrastructure projects previously delegated to many state-owned companies.

Bundling these funds into a single vehicle could help Indonesia attract “major core investors,” Wiranto said, adding that the risk would also be shared. “If I were to invest in a certain project [which] does not take off, then all my money is stuck there. If I were to invest in this fund, I might be able to obtain better terms. “

However, he added that its success depends on Indonesia putting the right laws in place for the fund, which it has not done yet.

Jakarta is also in talks with the Japan Bank for International Cooperation. The loan export agency is considering partnering with the DFC and Abu Dhabi Investment Authority to invest in the new fund, Indonesia’s Ministry of Maritime Affairs and Investment said.

A delegation, including Mr Luhut, would visit Tokyo and Abu Dhabi in early December.