The global shipping industry has sounded the alarm about an increase in kidnappings at sea and called for better military protection from pirates for ships operating in dangerous waters.

Highly organized pirate gangs operating off the West African coast are increasingly targeting the crew of merchant ships rather than cargo or fuel, warned industry experts.

“What has changed is the number of people they bring ashore,” said John Stawpert, security expert with the International Chamber of Shipping, a trade association for owners and operators. “At the moment the crew is where the money is.”

The 6,000 km stretch of coast from Senegal to Angola is “without a doubt the most dangerous region in the world for seafarers,” said Munro Anderson, partner at Dryad Global, a maritime intelligence group.

While the Gulf of Aden off Somalia was monitored by international naval fleets because of its proximity to the Suez Canal, the West African pirates were able to “operate relatively with impunity,” he noted.

Robert Peters, senior analyst at the crisis response firm Ambrey, said, “It’s not just a group of people with guns and a speedboat. We’re talking to 30 or 40 men in a gang. “

The rise in kidnappings could increase the cost of moving goods by sea and make it difficult for shipping companies to find crew members. The threat of abduction resulted in India banning its seafarers from working on ships sailing through the Gulf of Guinea off West Africa.

The International Maritime Bureau, which oversees piracy, recorded 132 kidnappings in the Gulf of Guinea this year, up from 119 in the same period in 2019.

Aslak Ross, head of marine standards at AP Moller-Maersk, the world’s largest container shipping group, said the risks had “reached a level where military capabilities need to be used to ensure safe passage at sea in the short term”.

Mr. Stawpert agreed. “Without a meaningful and sustained response from the Navy, the shipping industry will continue to be vulnerable,” he said.

The West African hijackers typically charge $ 50,000 per hostage, a far smaller sum than the Somalia-based pirates who operated at the beginning of the decade and charged tens of millions of dollars for an entire crew.

“Negotiator [for the pirates] will come with a target and they tend not to move, ”said Mr. Peters of Ambrey. Most shipping companies are covered by ransom insurance and hire private security groups to handle the negotiations.

While those involved in low-level marine crime come from across the region, the pirates who commit the most brazen and complex kidnappings “come almost entirely from Nigeria,” Anderson said. 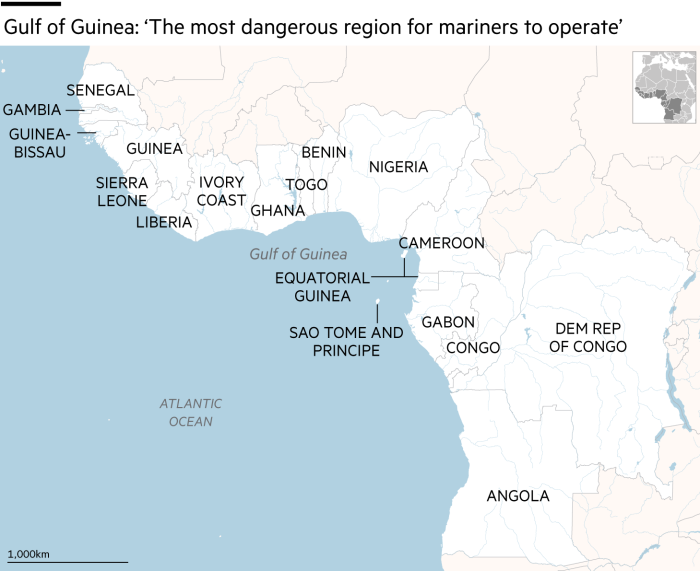 Mr Siebels said another reason pirates target seafarers rather than cargo is to limit the time on the target ship to avoid getting caught. “If you kidnap crew members, you only need to be on the ship for an hour or two, which makes it basically impossible to respond,” he said.

Fourteen of the 27 crew on a Liberian-flagged ship that boarded off the coast of Equatorial Guinea this month are still missing.

Nigeria, the richest country in the Gulf of Guinea, has stepped up its anti-piracy efforts by adding two new planes, three helicopters and 16 interceptors to its fleet. Nigeria became the first country in the region last year to pass a law specifically aimed at preventing piracy, though critics cited the continued kidnappings as evidence of its ineffectiveness.

Bashir Jamoh, director general of the Nigerian Maritime Administration and Safety Agency, said infiltration of the pirate gangs was key to preventing further attacks as well as increasing international cooperation.

“There is a need for cooperation between Nigeria and other African countries,” he said. The UN Bureau on Drugs and Crime warned last year that piracy cost West African economies $ 2.3 billion between 2015 and 2017.

Dryad Global’s Mr Anderson said piracy cannot be separated from broader problems of poverty and lack of jobs and opportunities on land. “What drives marine crime is a strong mix of poor socio-economic conditions on land and a lack of security and anti-piracy activities at sea,” he said.