And there you have it. Eight contenders to succeed Roberto Azevêdo as the World Trade Organization’s director-general (DG). One of the strongest contestants, Kenya’s Amina Mohamed, was nominated with a day to spare, defying widespread belief she wouldn’t secure her government’s backing. Two highly credible female African candidates and no one from the EU: truly these are unusual times. The UK’s last-minute nomination of ebullient former trade minister Liam Fox caused an awful lot of eyebrow elevation in Geneva, though among other things his harsh criticism of China means he will be lucky to get out of the stalls.

In the eminently capable hands of David Walker, the New Zealand WTO ambassador who chairs the organisation’s general council, an iterative process now starts. The candidates present themselves to the members and, by process of elimination, a consensus emerges around one. That’s the theory. In 1999 there was a fractious deadlock which ended with two candidates serving half a term each. The great unknown this time is whether the US might just veto all the candidates and create stasis, which could easily stretch into next year. If the contest goes beyond September when Azevedo leaves, one of the three deputy directors-general will have to be appointed as interim DG, a potential drama in itself.

Today’s main piece examines what a new DG might actually achieve, while our chart of the day looks at the UK’s financial services trade with the EU. Tall Tales of Trade questions Liam Fox’s grasp of matters trade.

A boss who will do more listening than talking

The names are in. The list is closed. The search for a new WTO director-general is now beginning a selection procedure potentially so ponderous it makes the election of a new pope look like a sudden-death penalty shootout.

A missionary from planet Earth might innocently assume the next stage would be for candidates to lay out an expansive view for the WTO’s future. A bold plan to unblock the appellate body, a strategy for turbocharging (or getting out of low gear, let’s be honest) talks on ecommerce and fisheries, radical reform to streamline decision-making processes and infuse the institution with a new sense of purpose, etc.

A pause here for WTO veterans to issue a hollow laugh. What’s about to follow is weeks and months of the candidates not differentiating themselves in policy terms so much as stressing that everyone likes and respects them and they can make the Americans, the Chinese and the Europeans get on. It’s more like an election for the president of a high school class than of the US. Interviewed by the BBC recently, the Nigerian candidate Ngozi Okonjo-Iweala emphasised the importance of being “a good listener” as well as a reformer.

However much it might seem that the member-driven consensus model has failed, it is still the WTO’s prevailing philosophy. The DG, in one of our favourite formulations, is a butler who arranges gatherings rather than a head of household who decides what everyone will do.

With the big three members (US, EU, China) at serious odds with each other in a variety of ways, a DG who tries to drive through a pre-determined plan to break open logjams is liable to be tossed into the river. Sometimes in the past they have managed it. In 1991 Arthur Dunkel, the Swiss DG of the General Agreement on Tariffs and Trade (Gatt), the WTO’s forerunner, managed to get the Uruguay Round — the last successful set of multilateral negotiations — out of a rut. His “Dunkel draft” paper suggested a set of trade-offs which formed the basis of a final deal. His successor, the brilliant Peter Sutherland, a charming bully (the latter term being his own description), was brought in as DG for the final years in 1993-1995 to get the deal over the line.

But that was back in the days before China joined the WTO and a small number of rich economies stitched up deals between them. Pascal Lamy, DG from 2005 to 2013, tried something similar to try to unblock the Doha Round at the notorious 2008 ministerial where the round in effect failed. His attempt crashed spectacularly. The US, increasingly regarding him as partisan and biased against American interests, subsequently lost confidence in him.

Returning to 2020, a deal to revive the WTO is not impossible. The outline would be something like this: the appellate body is reformed to reduce its judicial activism; the entire membership (preferably including malcontents such as India) embrace plurilaterals as a primary means of decision-making; middle-income countries accept more objective criteria for gaining special and differential treatment. In return, the US comes back on board, and countries such as China get back the continued functioning of the organisation and a US pledge to address issues multilaterally rather than bilaterally when possible.

But this agenda can’t be pushed solely or even primarily by a reformist DG. It has to come from the members, and particularly the EU, whose relations with Washington and Beijing are far less poisonous than the US-China relationship. To this extent, several people we spoke to in Washington were baffled why “Big Phil” Hogan had wanted to become WTO DG when he could have more influence as EU trade commissioner.

In reality, the big event for the future of the WTO this autumn isn’t the DG selection but November’s US presidential election. If Donald Trump is reelected, the strong likelihood is more of the same — the institution undermined while the US goes its own way no matter what the DG does. Let’s recall that Azevedo is widely regarded as being close to the US, but he still hasn’t managed to stop the wrecking ball. And if Joe Biden wins? Now there’s an interesting thought. We’ll back come to it soon.

Ever since negotiations began on a post-Brexit trade deal with the EU, it has been the UK position that it wants a stable agreement on equivalence, giving each side free access to each other’s markets — and allowing much of the financial services business Britain does with EU clients to continue without significant extra costs to companies. Yet lawyers are cautioning that could be unlikely. As it stands, more than two-fifths of UK trade in financial services is with the EU. 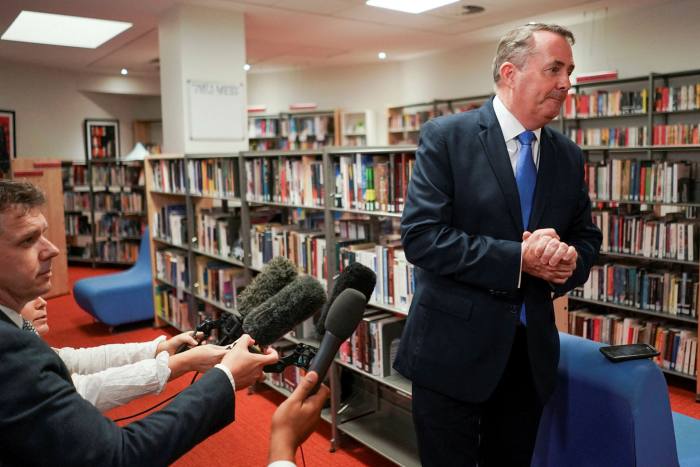 An oldie but a goodie. There are multiple reasons why Liam Fox isn’t going to be the next director-general of the WTO, his harsh words on China being merely one of them. Another is his lack of credibility derived from a string of wildly optimistic statements when he was UK trade secretary. The trade aficionado’s tall tale of choice was his confident assertion that we are now in a post-geography world where distance was ceasing to matter for commerce, a contention contradicted by enough evidence to fill a dozen 20ft shipping containers. But his timeless classic will forever be an assertion in 2017 that he would sign replacements for 40 EU trade deals “one second after midnight” on Brexit day, which was then scheduled for March 2019. It’s now more than two years later, and the UK has painfully managed to achieve fewer than half that number. The WTO can’t just run on mindless optimism. Can it?