Hi from Washington DC, where Dominic Raab, the UK foreign secretary, arrives today on what might be an impossible mission, at least when it comes to trade, as we discuss in Person in the News below.

For the Office of the United States Trade Representative it’s been an odd week. It reversed its move to reimpose 10 per cent tariffs on Canadian aluminium — then it lost a big World Trade Organization case related to its China trade war, which is the subject of today’s column. Our chart of the day looks at updated forecasts for economic growth from the OECD.

If only Washington had better arguments

“This panel report confirms what the Trump Administration has been saying for four years: The WTO is completely inadequate to stop China’s harmful technology practices”. Did you hear that sound? It was Robert Lighthizer, the US trade representative, thundering about the latest bad news from Geneva, at least in his deeply WTO-sceptic, or shall we say phobic, mind.

On Tuesday a panel of the WTO’s dispute settlement body delivered its ruling on the Trump administration’s punitive tariffs against billions of dollars of Chinese goods imports that formed the core of its trade war against Beijing, starting in early 2018. The verdict was not pretty for Washington, and here’s why.

The Trump administration’s first defence in the case was essentially that the WTO had no business meddling in a dispute that was already being resolved, and settled, in bilateral negotiations. But the judges rejected that claim on the grounds that the talks did not prevent China from seeking redress on a parallel track at the WTO, and noting that, from Beijing’s perspective, the negotiations did not replace the proceedings in Geneva. Score one for China on process.

On the substance, there were two problems with the China tariffs from a global trade rule perspective. One was that they were discriminatory, since they only applied to China and not other countries. The other is that they were excessive compared with the levy rates the US had committed to within the WTO — and the Trump administration did not really challenge that. Instead, it argued that the US invoked an exception allowing it to impose the tariffs based on the protection of “public morals”.

It’s an odd term as applied to international trade but it is in fact part of WTO jurisprudence. According to a paper by Rajesh Babu, law professor at the Indian Institute of Management Calcutta, it has been claimed by the US in a gambling dispute with Antigua and Barbuda, China in a case filed by the US on its import bans related to audiovisual products, and the EU as it defended its ban on seals imports from countries such as Canada and Norway.

But on those grounds, Lighthizer’s legal team failed to prevail. The WTO said that the US’s move to impose tariffs to punish China for intellectual property theft and other forms of unfair commercial competition was conceptually consistent with the “public morals” exception, but that Washington had failed to make the case properly. It had not explained why the Chinese products subject to tariffs had benefited from the practices that the US was disputing, nor did Washington prove that the tariffs levies served to defend “public morals”. This meant that the US had not met the burden needed to invoke the exception, according to the WTO panel.

Perhaps Lighthizer’s fury is so intense because this might have been a winnable case for the US, if only Washington had better arguments. It’s true that in the minds of Trump administration officials the only thing that matters is if their tariffs are consistent with US law, and the judgment from Geneva is secondary at best. But from an image point of view, it would have been quite a feather in Lighthizer’s cap if his side had prevailed on the international legality of the China trade war. Instead, he has been left repeating a very familiar refrain that the WTO is broken — and the world is left wondering when, and if, Trump will follow through on his threats to withdraw from the organisation altogether.

The OECD has urged governments to adopt more targeted measures to support their economies, such as helping people find new jobs, now the initial wave of the coronavirus pandemic has passed, writes Chris Giles. In its interim economic outlook, the organisation praised countries’ initial blanket response of state support and raised its economic forecasts for 2020 as economies rebounded faster than expected once lockdowns were lifted. But it recommended a shift towards public investment in new forms of growth rather than propping up sectors that might take years to recover. 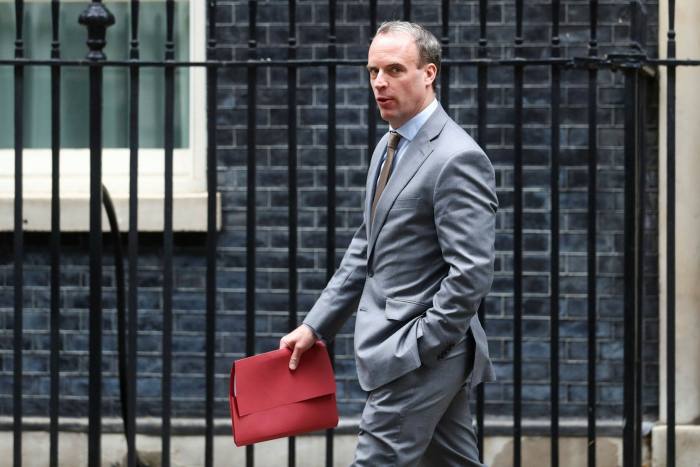 UK foreign minister Dominic Raab is arriving in DC today at a rather delicate moment. The British move to ditch part of the EU withdrawal agreement has triggered absolute fury on Capitol Hill, particularly among key Irish-American Democrats, and Nancy Pelosi, the speaker, who have warned that it could threaten any chance of a UK-US trade deal.

In the era when Max Baucus chaired the Senate finance committee, every foreign official knew not to mess with Montana beef, and now, with Richie Neal chairing the House ways and means committee as well as the Friends of Ireland caucus, the same applies to not messing with the Good Friday accord.

Can Raab change any minds? It’s hard to see. Incidentally, if Joe Biden, who has Irish roots, wins the White House, trade liberalisation is likely to be far from the top of his agenda, and this could be just another reason to delay an agreement.