Hello from Washington, where almost all eyes have been on the confirmation hearing of Amy Coney Barrett, Donald Trump’s third Supreme Court nominee, on Capitol Hill, as she dodges questions about how her views on abortion, healthcare and gun rights could influence her judicial decisions.

Our eyes, however, are on the World Trade Organization, which yesterday came out with its latest ruling on the Airbus-Boeing dispute. Our main piece looks at what might happen next. Our person in the news is shiny new EU trade commissioner Valdis Dombrovskis, while our chart of the day looks at South Korea’s cultural exports.

It’s finally here. Like a difficult second album, the World Trade Organization’s ruling on Airbus-Boeing took longer than expected, but it has arrived.

For those who have not been following, this is the long-awaited ruling expected from the WTO outlining the retaliatory measures the EU can take against the US for its state support of Boeing. The US has already hit Europe with tariffs on $7.5bn-worth of imports over state support for Airbus.

People have for some time been hoping this ruling would break the deadlock between the two sides on negotiating some kind of resolution to the fight over subsidising airlines. The logic goes that while the US can put tariffs on Europe without fear of retaliation, it does not face much political pressure to engage in talks. This ruling gives Europe some leverage.

The first obvious point to make is that EU is allowed to levy tariffs on just $4bn of US goods, while the US can hit $7.5bn of European goods. The US sees the lower amount as somewhat of a vindication of its position that Europe is definitely the worst offender of the pair when it comes to subsidising airlines — and it definitely gives Brussels less bargaining power than it might have hoped.

The EU, as is customary, has carefully targeted some products to cause political hurt, such as swing state Florida’s blueberries © Marco Bello/Reuters

Nevertheless, the Europeans have come up with a cunning mix of American items to put tariffs on, including aircraft, diggers and fitness machines — and as is customary has carefully targeted some products to cause political hurt. For example — it’s gone after Florida’s blueberries: Florida is a swing state in the upcoming presidential election, so swift application of those tariffs may not be a point in Trump’s favour.

The United States Trade Representative punched hard on Tuesday morning. While a victory dance was to be expected, it went further and argued that if the EU actually dared to go ahead with those tariffs, it would be forced to respond. While pleased that the WTO had granted Europe less room for tariffs than had been granted to the US, the US went further and argued that, actually, the correct answer was that Europe could put no tariffs at all on the US. It pointed out that the WTO ruling was in fact authorising retaliatory tariffs solely on a tax-break given by Washington state, and given that this tax break was repealed in April, the $4bn of tariffs had “no legal basis”.

The prospect of more tariffs everywhere is not good for the transatlantic relationship. The good news is that both sides say they want to come to an agreement on how to settle this dispute, and Washington is likely to try harder now that there will be political pressure in the form of US exporters unkeen on tariffs being applied to their goods.

For its part, the US claims that its state aid problem with Boeing has been fixed. But Robert Lighthizer’s USTR wants more from Europe — earlier this summer, he suggested that a negotiated solution would involve not only “commitments” from Airbus and European backers “not to do it again”, but would also involve “paying back some element of the subsidy”. In July, Airbus also put out a statement that it was no longer taking government handouts. New European trade commissioner Valdis Dombrovskis has called for the US to remove its tariffs so that the two sides can focus on reaching a long-term agreement.

An intermediate solution was suggested last October by commerce secretary Wilbur Ross. Speaking to the FT, he suggested that the amount awarded to the EU could simply be subtracted from the amount awarded to the US. That would still leave the US with tariffs of $3.5bn on European goods, and would likely lead to the US being able to select which items it left tariffs on. So it would hardly be the best deal for Europe.

Elsewhere, it’s reported that Europe will hold off implementing the tariffs until at least after the presidential election in the hopes that they can negotiate some kind of deal. But Republican-minded trade folk in Washington point out that Europe is unlikely to find the Biden administration totally sympathetic. They may have a point on this issue — the US and EU have argued over planes throughout both Democratic and Republican administrations. Biden has promised to make amends with Europe — but an agreement on how each country can support its aerospace champions seems far away, regardless of who is in the White House.

There’s still a chance things could escalate in the meantime. Dombrovskis has said on the record that Europe will levy its $4bn of tariffs if the US does not remove its $7.5bn. If this proves more than fighting talk and Europe goes ahead, and the US holds good on its own threat to “respond”, the already fraught transatlantic relationship might well get worse before it gets better.

As Seoul music agency Big Hit Entertainment prepares its IPO this month, Korean music, film and television dramas have been steadily building popularity across Japan, China, Hong Kong and Taiwan, as well as south-east Asia. The value of these “cultural exports” grew fourfold to $10.4bn in 2019, from $2.6bn 10 years earlier. The figure equates to one month’s worth of computer chips exports, Korea’s most important product. For a country with few natural resources, the economic contribution of hallyu, the “Korean wave” of cultural exports, is significant. 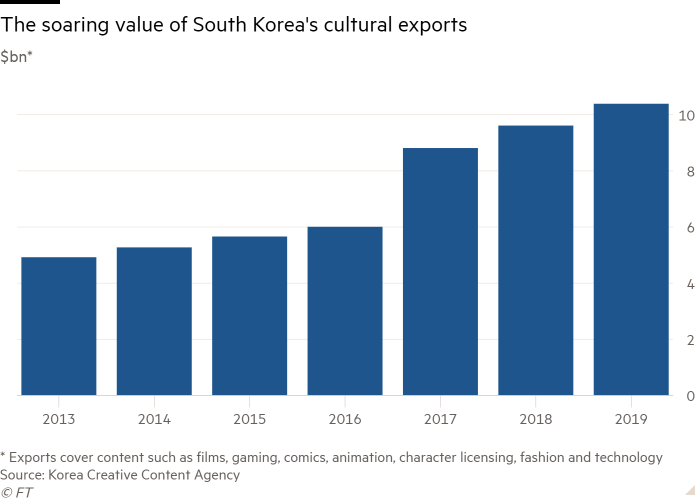 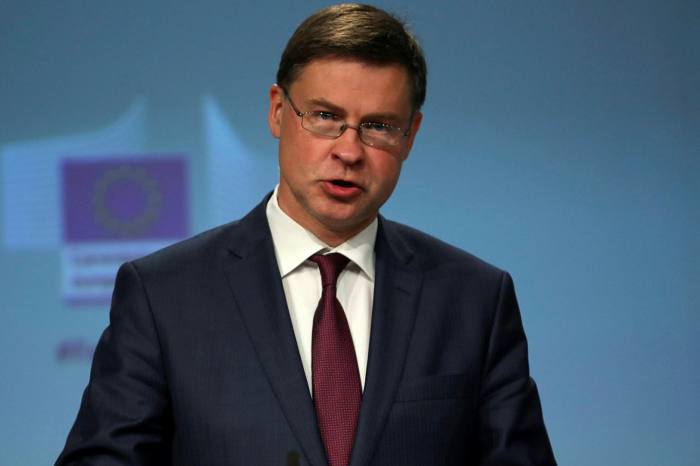 Valdis Dombrovskis was confirmed last week as the EU’s replacement trade chief, after his predecessor Phil Hogan’s shock resignation in August. He told the Financial Times that repairing the transatlantic relationship between the US and the EU would be a top priority, and that the US should withdraw its Airbus-related tariffs as a confidence-building measure.