It has become the preferred mode of transport and the pastime of choice for millions of people in the coronavirus era. But the cycling revolution has been stopped in its tracks — by a worldwide shortage of bikes.

Many stores around the world have been selling out as soon as new bikes are delivered, leaving shop floors empty but for premium brands and frustrated customers on months-long waiting lists. Bike manufacturers in western markets and the two biggest Asian producers, China and Taiwan, have struggled to meet the surging demand as the effects of the pandemic continue to resonate.

“It’s at the point where, in the major markets of the world, bicycle sales have overwhelmed supply,” said Jay Townley, a bike industry veteran and consultant at Human Powered Solutions.

In bike-loving France, online cycle sales surged 350 per cent in the month to May as the virus gripped Europe, according to data from Foxintelligence, the consumer research group.

Decathlon, the French sporting goods chain which runs stores worldwide, said many had run out of cheaper models leaving “tens of thousands” of people waiting to buy. While the company previously accepted part-exchanges, it is now buying second-hand bikes for repair and resale in an effort to satisfy customers.

Lee Katz, co-owner of Turin Bicycle, which has outlets in Chicago and Denver, said he had completely sold out of all models costing less than $1,000. “I’ve been in the business for 55 years and lived through ups and downs . . . there is nothing that has happened before like this,” he said.

In London, bike paths have teemed with cyclists during the pleasant weather © David Cliff/NurPhoto/Getty The interest in cycling has come from commuters keen to avoid public transport because of the increased risk of infection and furloughed workers with time on their hands seeking a simple form of recreation. Vehicle traffic also fell sharply in many cities due to lockdowns, tempting cyclists on to the roads.

In London, bike paths have teemed with cyclists during the pleasant summer weather and queues of socially distanced customers have become a common sight outside bike shops.

Sheila Wesa, 28, said she contacted about five shops in London that were sold out or had limited stock, before finding a second-hand mountain bike online for £150. “I wanted firstly to exercise and to have the flexibility to go more places without having to rely on public transport,” she said.

London-based manufacturer Brompton, whose fold-up bikes can sell for more than £1,000, is among those scrambling to meet a sharp rise in the number of prospective buyers.

“We’ve never, ever had such strong trading,” said Will Butler-Adams, chief executive. “We’ve more demand than we can make.” The company is not taking new orders from shops until October, though it has begun selling direct to consumers online.

The shortages have led people to drag rusty frames from sheds and garages to be fixed up, creating a mini-boom for mechanics. At Cyclable in Paris’s 17th arrondissement, a “workshop full” sign is displayed in the shop window. “You have to book two to three weeks in advance,” said employee Marc Mateus, who is training two new staff members taken on since the restrictions began to be lifted. “It’s been like that since the end of lockdown.”

Many would-be buyers are asking why manufacturers are not able to simply ramp up production. 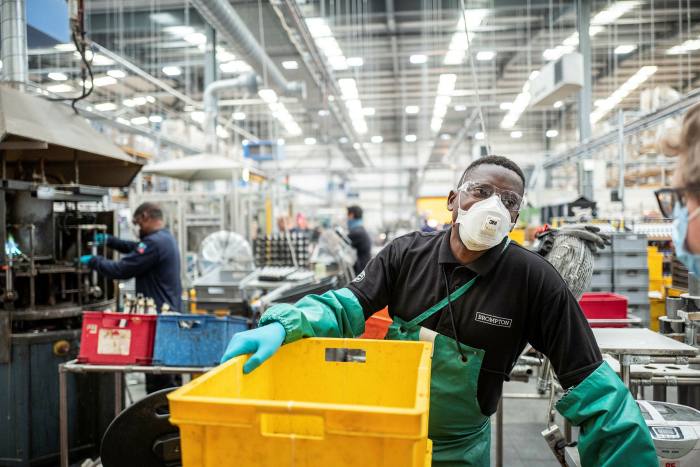 The company, whose fold-up bikes can sell for more than £1,000, is not taking new orders from shops until October © Charlie Bibby/FT

Among the factors limiting supply are social-distancing measures requiring gaps between workers, and staff absences due to illness or self-isolation, which together have curbed production. Brompton had made a number of changes to the layout of its west London plant to keep staff safe, said Mr Butler-Adams, but was only now approaching the 1,500 units a week it produced pre-pandemic.

Another reason is that China and Taiwan were among the countries that felt the effects of the pandemic first, which resulted in huge disruptions to their supply chains and the shutdown of factories and ports.

Jack Zeng, chief executive of China-based Suzhou Dynavolt Intelligent Vehicle Technology, which produces the Dyna Bike brand, said sales were two to three times up on last year. “There were all of a sudden lots of individual buyers who wanted four or five bikes . . . Our sales people were really busy,” he said.

Virus-related shipping disruptions and difficulties securing parts had made it impossible to take advantage of the spike in demand, he added. One order was redirected from Spain to Brazil and then back to its warehouse due to changes in import rules caused by Covid-19.

The company has been forced to place orders with parts manufacturers as far ahead as October to ensure supply. “Companies like us don’t really want explosive growth,” he admitted. “Because with explosive growth comes a sudden decline, which can be really harmful to the sector.”

David Hon, chief executive of bike manufacturer Dahon, which operates a factory in China, said the company was prepared for a surge in global demand after noting a spike in Chinese sales when the pandemic hit. But the head start was still not enough.

“It’s a free-for-all fight for people and for parts,” he said, adding that some suppliers were months behind on fulfilling orders and they had struggled to hire the necessary staff.

For US buyers, the issue is compounded by the trade dispute with China that has led to tariffs being slapped on imported goods. Mr Townley, the consultant, pointed out that while Europe imported about half of its cycles, the US was overwhelmingly dependent on foreign-made bikes. “We can’t really make up for anything domestically,” he said.

As the virus-induced economic downturn grinds on and unemployment rises, Mr Townley said he believed the market for cheaper bikes would remain strong. But China’s bicycle association has warned against excessive optimism about overseas demand, which it expects to be shortlived.

Video: How coronavirus will change commuting – and air pollution