Grime artist Wiley has apologised for “generalising” Jewish people after being banned from social media.

In an interview with Sky News, the artist insisted: “I’m not racist.”

Twitter had earlier banned his account permanently after a public backlash over a perceived lack of action.

“We are sorry we did not move faster,” Twitter said in a statement.

Sky published excerpts of an interview with the rapper, which it plans to broadcast later.

It reported that the offensive tweets were sparked by a falling-out between the rapper and his former manager, who is Jewish. The pair cut ties in recent days.

“I just want to apologise for generalising and going outside of the people who I was talking to within the workspace and workplace I work in,” Wiley said.

“I’m not racist, you know. I’m a businessman. My thing should have stayed between me and my manager, I get that.”

However, Sky News said the artist “refused to distance himself from most of the anti-Semitic comments he posted on social media” during the interview.

One tweet read: “I don’t care about Hitler, I care about black people”, and compared the Jewish community to the Ku Klux Klan. 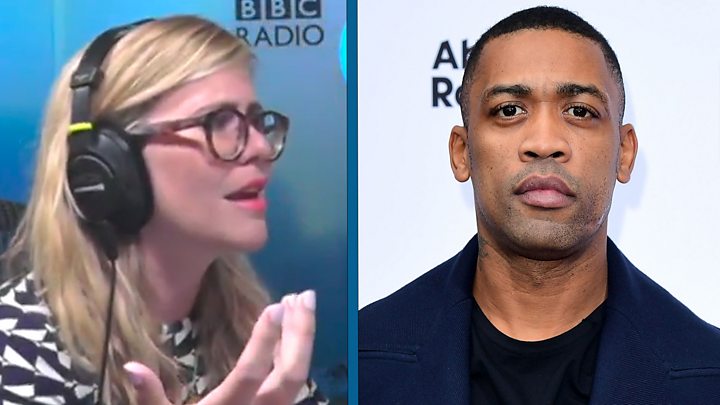 Twitter did not immediately respond, prompting a public outcry and a 48-hour boycott of Twitter by many users over what they said had been an unacceptable delay.

The social network eventually banned Wiley for violating its “hateful conduct” policy – a day after Facebook and Instagram had deleted the music star’s accounts for “repeated violations” of their rules.

Twitter said it had decided to make an earlier temporary ban permanent, and wipe all his past posts from its platform, “upon further consideration”.

“We deeply respect the concerns shared by the Jewish community and online safety advocates,” the statement said, promising to continue to tackle anti-Semitism.

The star, known as the “godfather of grime”, was awarded an MBE for services to music in 2018.

He told Sky News that he “never wanted it” and would be willing to forfeit the honour.

“I never felt comfortable going to get it. Just look at Britain’s colonialism history,” he said.

However, it is emblematic of a slowness to act on hateful abuse from social media sites. And many are asking why this took so long.

Time and time again, decisive action from social media sites over racist abuse, misinformation or hate speech has come only once comments have reached thousands of users.

What does it take for Twitter to act decisively on anti-Semitic abuse?

In this case it appears to be external pressure – the move comes after a boycott by users.

And it also seems to be dependent on what the other social media sites choose to do: Facebook moved to suspend Wiley’s accounts on Tuesday, and then Twitter appeared to follow suit.

With the Stop Hate for Profit campaign ramping up pressure, and increased focus on the way social media sites tackle hate speech and misinformation, the spotlight will intensify on the actions of Twitter, Facebook and Google in these scenarios.

The delay in Twitter taking action prompted the 48-hour boycott of Twitter by many users – including celebrities and MPs – beginning on Monday morning. Organisers said the time reflected the “48 hours of pure race hate” they accuse Twitter of giving to Wiley.

On Tuesday, Facebook issued a ban after Wiley was discovered posting abusive material on his personal page using his real name, Richard Cowie.

Twitter followed suit on Wednesday, after what it said was a thorough investigation.

Despite the move, the Board of Deputies of British Jews said both Twitter and Facebook had been slow to act, adding “it is just not good enough”.

“Social media companies have not been strong or fast enough about tackling racism, misogyny or homophobia,” it said in a statement.

The Campaign Against Antisemitism echoed that sentiment, writing that Twitter “has finally listened”.

“The closure of Wiley’s account is too little too late, but it is at least a start for this deeply irresponsible social network,” it said.