Companies and lawyers are rushing to work out the implications of US sanctions on Chinese and Hong Kong officials, which have raised temperatures between the world’s two biggest economies.

The measures, announced by the Trump administration on Friday, are in response to a draconian national security law Beijing has imposed on Hong Kong. China on Monday unveiled retaliatory sanctions on US officials.

Washington’s moves could have far-reaching implications beyond the targeted individuals, with banks among those that could be affected.

What are the sanctions?

The sanctions are designed to prevent the 11 named individuals — which include Hong Kong leader Carrie Lam — from participating in the US financial system. They penalise US financial institutions and individuals that do business with those who have been sanctioned.

They follow a well-established process by which the US government has used its financial system to previously put pressure on individuals in countries such as Iran and Russia.

Their effectiveness partly depends on whether the sanctioned individuals have US assets. Luo Huining, China’s top official in Hong Kong, has said he does not hold “one cent” in overseas assets. He added, sarcastically, that he would send Mr Trump $100 so that the president has something to freeze.

“It can be toothless for the sanctioned person, but for banks that have lots of assets in the US, they [the US government] tend to get enforcement quickly,” said Benjamin Kostrzewa, a lawyer at Hogan Lovells who formerly worked at the Office of the US Trade Representative.

What do they mean for banks?

The Hong Kong Monetary Authority, the territory’s de facto central bank, said that the sanctions have “no legal status” within its borders. But the measures could have big implications for US and international banks that operate in the city if they provide services to the individuals.

US banks are directly prevented from doing business with the sanctioned individuals and would have to freeze their assets or risk fines. However, lawyers point to the fact that US banks’ foreign subsidiaries that are incorporated overseas are generally understood to be non-US entities, which could put them outside Washington’s jurisdiction. 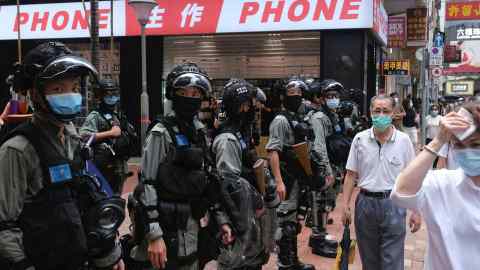 But non-US banks are not in the clear. Transactions between non-US banks could be affected if they pass through the US financial system. International transactions, largely conducted in dollars, are often settled through correspondent banks based in the US.

Banks anywhere in the world could also be subject to secondary sanctions for being involved in transactions with the individuals. If imposed by the president, these sanctions could punish them by weakening their ability to participate in the US financial system.

“They use this approach with Russia, North Korea, Iran, Hizbollah, where they threaten punitive measures for financial institutions that engage in significant transactions” with these parties, said Nick Turner, a lawyer at Steptoe.

Secondary sanctions aside, lawyers suggest that banks could avoid any impact if they keep their relationships with the sanctioned individuals completely outside of the US financial system and do not cause any other American institutions to deal with them. Mr Kostrzewa points out that sanctioned officials are likely to have already moved their dollar assets into the Chinese and Hong Kong currencies, putting them out of Washington’s reach.

What are the broader implications?

The sanctions also pose risks for asset managers and other groups which do business with the individuals in question. US-domiciled companies are obliged to freeze assets owned by these people, including securities or bonds. 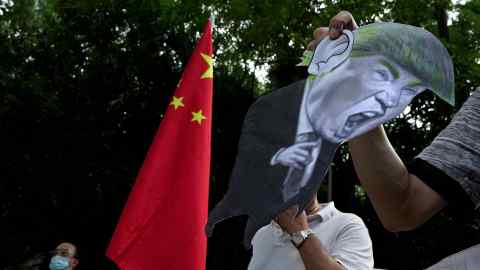 The US Office of Foreign Assets Control refers to a so-called “50 per cent rule”, which says that any company more than 50 per cent owned by the sanctioned individuals would be unable to participate in the US financial system.

One Hong Kong company with ties to one of the sanctioned individuals has already reduced its stake in a US company after the measures were announced.

Teresa Cheng, Hong Kong’s secretary for justice and one of the sanctioned individuals, is married to the chairman of Analogue Holdings, an investment company. A disclosure in July stated she owned shares in the firm.

On Sunday, the company disclosed that Ms Cheng “does not have any legal or beneficial ownership or financial interest in any shares of the company”. It added that it did not believe the sanctions applied to the group “based on all available information at this time”.

On Monday, however, the company said that it had sold a 2 per cent stake in New York’s Transel Elevator & Electric, taking its ownership below 50 per cent. Analogue told Hong Kong’s stock exchange that it made the sale after consulting US legal counsel and due to “changing Sino-US tension”.