Hello from London, where I’m pondering news from the German statistics office showing imports of ice cream fell 13 per cent in the first four months of the year because bars and restaurants serving them shut due to the lockdown. It made me think that the reopening of pubs, bars and restaurants in England on July 4 is likely to also boost ice cream imports in the UK, after the country’s goods imports collapsed at the fastest pace on record in April. According to the International Trade Centre, Germany and the UK are the world’s largest importers of ice cream: who knew?

Today’s main piece looks at something a little broader than ice cream; namely what the pandemic has done to globalisation. Our policy watch examines new UK human rights sanctions that could be used against China, while our chart of the day focuses on import restrictions among the G20.

“In terms of drawing conclusions from the (Covid-19) crisis, we need to think about how to ensure the EU’s strategic autonomy.” So said EU trade commissioner Phil Hogan in April, mirroring notorious calls for protectionism in the US.

Coupled with years of high trade tensions between the world’s two most important economies and weakening of global trade, theories that the pandemic has put a nail in the coffin of globalisation have been rife.

“The Covid-19 pandemic is driving the world economy to retreat from global economic integration,” Douglas A Irwin, senior fellow at the Peterson Institute for International Economics, wrote in a blog in April.

“Starting with the Trump presidency, and with a breathtaking acceleration over the space of just a few months thanks to the Covid-19 pandemic, the world is being driven by self-interest, distrust and a game of us versus them in political circles as well as companies’ supply chains,” Steen Jakobsen, chief economist at Saxo Bank, said last week.

The signs that globalisation is struggling have been clear. In April, the CPB world trade monitor reported the largest monthly fall in global trade since records began.

In the 12 months to May, fDi Markets, an FT-owned company tracking greenfield investment, showed that cross-border investment fell almost 20 per cent, the largest drop since records began. Sectors that have complex global production lines, such as cars and electronics, were among the most affected, and investment dried up faster in developing regions.

Troubled with continuously changing tariffs and regulations, plus difficulties sourcing parts and components, and with the additional costs of delays at ports and borders due to new Covid-19 related checks, companies rethought their supply chains.

During the pandemic, Google searches for “reshoring” spiked to unprecedented levels. At the same time, suppliers’ delivery time of industrial products, chemicals and basic materials rose to the highest level since records began, according to the IHS global survey of purchasing managers.

Then there is automation. The pressure to automate production has increased. Machines don’t get infected. In Europe, about 82 per cent of investors surveyed by EY expect technology adoption to accelerate in the next three years as a result of Covid-19. Globally, the majority of chief financial officers are planning more automation as a result of the pandemic, and it is the action most planned after securing workplace safety, according to a survey by PwC.

Combined with supply chain disruption, the trend adds to the risk for developing economies to lose their place in the global supply chain offering cheaper goods and services.

“Automation erodes the comparative advantage that low-cost labour gives developing countries over developed countries and this could lead to production being brought closer to the headquarters of transnational corporations that are at the head of global value chains,” said Cecilia Ugaz Estrada, special adviser for the directorate of corporate management and operations at the UN Industrial Development Organization, during the virtual Global Manufacturing and Industrialisation Summit last week.

Yet later trends suggest that globalisation might not be dead after all. Global trade is recovering from the lockdown lows and all those predictions of mass reshoring might not come to pass. The costs of reconfiguring some of the existing supply chains are “simply too great,” argued Raoul Leering, head of international trade analysis at ING.

Most importantly, there are signs the international response is shifting.

While several governments met the initial Covid-19 outbreak with a raft of trade restrictions, mostly to prevent exports of medical supplies, G20 economies had repealed about 36 per cent of the pandemic-related trade restrictions by mid-May, according to the latest report on G20 trade measures by the World Trade Organization.

Since the initial outbreak, the world’s 20 largest economies, which make up about 90 per cent of global output and 80 per cent of trade, have also lowered barriers to imports of many virus-related products.

In the year to mid-May, 65 of the 93 pandemic-related trade measures introduced by those countries were trade-facilitating, rather than restricting, according to the WTO. And over the past year, new import-facilitating measures, such as tariff reductions, the elimination of import taxes and the reduction of export duties, covered about $736bn worth of trade, the highest value since 2014.

Commenting on the findings last week, Roberto Azevêdo, WTO director-general, said “there are signs that trade-restrictive measures adopted in the early stages of the pandemic are starting to be rolled back”.

Covid-19 is leaving long-lasting scars on the world economy, with deglobalisation feared to be one of them, particularly in emerging countries whose economic growth has been boosted by being part of the global supply chain. Automation is likely to continue restructuring production and trade, but international co-operation has not died yet and early signs show that, just like ice cream demand, it could recover.

The world’s biggest trading countries have been taking more and more measures to restrict their imports in the past decade. Since 2009, import-restrictive measures escalated to cover more than 10 per cent of imports from G20 countries. 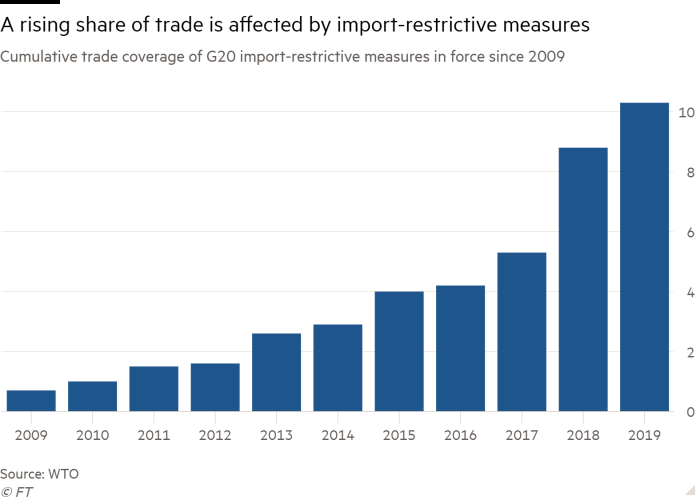 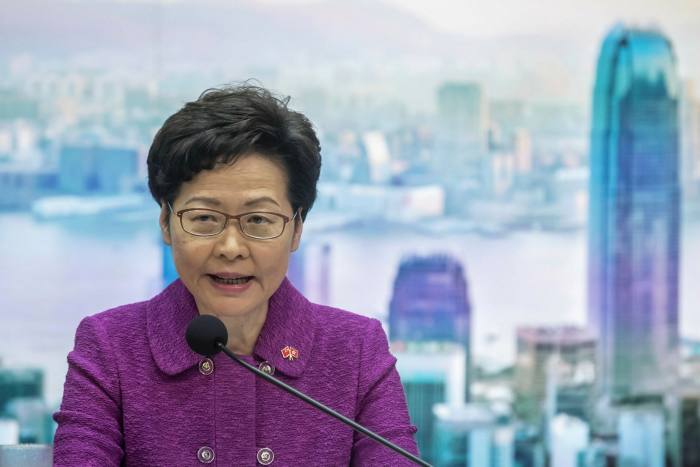 Carrie Lam, Hong Kong’s chief executive, is among those Dominic Raab is being urged to target with the UK’s new human rights sanctions regime © Paul Yeung/Bloomberg

The UK did not name any Chinese targets, but the new system is set to become a vehicle for the growing lobby of MPs who accuse Beijing of human rights violations.

The UK sanctions regime was unveiled a week after China passed a sweeping national security law for Hong Kong that will increase Beijing’s grip on the territory and has drawn international condemnation.