Just weeks before Boohoo was hit with fresh allegations about poor working practices in factories that make its clothes, MSCI gave the UK fast-fashion retailer a clean bill of health.

The rating and index provider reiterated Boohoo’s double A rating — its second-highest ranking — while highlighting how it scored far above the industry average on supply-chain labour standards in a June update of the online retailer’s environmental, social and governance ranking.

That exceptional rating — which placed Boohoo among the top 15 per cent of its peers based on ESG metrics — as well as the decision by so-called sustainable funds to invest in the retailer has come under fire in recent weeks after the Sunday Times claimed garment workers at a Leicester factory making clothes for one of Boohoo’s brands were paid below the minimum wage and suffered poor working conditions.

Boohoo has since announced an independent review of its UK supply chain, said it had not uncovered “evidence of suppliers paying workers £3.50 per hour”, and alleged there were inaccuracies in the investigative reporting.

“The fact that Boohoo ended up in so many sustainable funds shows the callous infrastructure of our investment system, and its participants,” said Martin Buttle, head of good work at ShareAction, the responsible investment group.

“Something went seriously wrong here, and it will continue to do so without a wider definition of financial materiality that fits the modern labour market, one which factors in actual human impact.”

One person who has been involved in efforts to clean up Leicester’s garment industry, who declined to be named, said investors piled into the stock because “they knew Boohoo was making money and they didn’t ask any questions”.

“There’s a long way to go with shareholders to get them to ask the questions on due diligence on human rights that they’re supposed to.”

Several asset managers pointed to Boohoo’s good ESG ratings, both from MSCI and others, as a factor in their investment decision even if some say they also carry out their own analysis.

The influence of ESG rating providers has grown significantly in recent years in tandem with an explosion in demand for sustainable investing, as groups from large pension funds to retail investors look for investment products that do good as well as generate returns.

More than 360 new ESG-focused funds were launched by asset managers across Europe last year alone according to data provider Morningstar. Investors have piled into sustainable funds, which pulled in a record-breaking €120bn in Europe last year — 2.5 times the amount in 2018.

As the field expanded many groups turned to a small band of ESG rating providers, including MSCI, Sustainalytics and Vigeo Eiris, to help with investment decisions.

Twenty funds that aimed to invest sustainably were invested in Boohoo according to Morningstar, including products from Standard Life Aberdeen, Legal and General Investment Management and Man Group. Several asset managers that tout their ESG credentials also ranked among its largest 30 shareholders.

But Ketan Patel, a fund manager at EdenTree Investment Management, questioned why sustainable funds were invested in fast-fashion retailers at all, arguing that it would be very difficult to make a £5 dress without cheap labour in the supply chain.

He added that asset managers should not rely on external rating agencies. “Whilst ratings provide a useful reference point, ESG managers need to do their own research to ensure that their clients are not compromised by having investments that are not aligned with their values,” he added.

One corporate governance specialist said ESG rating providers sometimes took a tick-box approach to scoring companies while fund managers often failed to carry out sufficient due diligence on the rankings.

He added: “I look at Boohoo with its MSCI score sheet. Who is doing a good job to make sure the rating is accurate?”

“(The ESG rating providers) have come up with elaborate scoring systems, which mean you can do really well in some areas and be really poor in another but get a pretty good score. But that can be quite a critical area — I’d argue a supply chain should be a red card issue.”

A key issue is that the majority of sustainable ratings rely on data provided by businesses. “A company may not know what the problems are in its own supply chain and thus cannot disclose them,” said Diane Menville, head of ESG at rating agency Scope.

Another concern is that because labour practices are generally of a high standard in the UK, many rating providers give companies a higher score for using British factories compared with manufacturing facilities in emerging markets — despite long-running concerns about working conditions at garment factories in Leicester.

Ms Menville’s team gave Boohoo an ESG score of 7.6 out of 10, far higher than the 5.8 industry average, in part because of the company’s large manufacturing base in the UK.

In its June report, MSCI said Boohoo had a “low reliance on supply chains in regions with poor working conditions” and “relatively strong supply chain labour policies and practices”. The rating provider downgraded Boohoo to an A score earlier this month following allegations about poor practices in its supply chain.

“MSCI ESG ratings are based on the assessment of thousands of data points across 37 ESG key issues,” the group told the Financial Times. 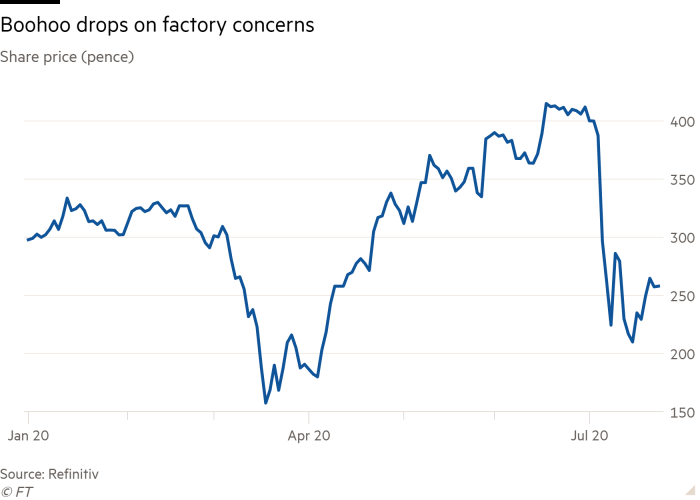 Sustainalytics had flagged the company as a medium risk before the Sunday Times story, partly because of what it deemed “weak management”. Although it said the company was involved in “low-level” labour relations controversies, the report said Boohoo had “very strong social supply-chain standards”. In its latest update issued this month, the rating provider said the company’s supply-chain management was “inadequate as it does not include any disclosure about the audits it has performed and any corrective actions implemented”.

Vigeo Eiris declined to provide details of its rating for Boohoo but said that “following the controversy, we downgraded further our assurance on their capacity to embrace ESG factors and risks”.

Since the most recent claims about Boohoo’s supply chain, asset managers including SLA have rushed to offload their stakes. SLA argued that the company’s response to the allegations was “inadequate in scope, timeliness and gravity”.

LGIM said it was speaking to the company about its supply chain. It added that its two sustainable funds in question tracked Solactive indices, which are based on ESG scores. The indices were rebalanced semi-annually meaning there could be a lag before information from data providers was reflected in the scores, it added.

Man said the reports about Boohoo were concerning. It added that its Numeric responsible investment funds that held the stock used a “multi-factor model which incorporates ESG as a significant weighting, but it isn’t done on a purely exclusionary basis”.

Others, such as European fund manager DWS, are calling for better-quality ESG data and ratings.

But Christopher Greenwald, head of sustainable investment research at UBS Asset Management, said investors needed to think carefully about how ESG ratings were used. “They are often marketed and presented as if they are investment-ready recommendations, but they really are starting points for fundamental analysis,” he added.

Letter in response to this article: