An expansion of the Federal Reserve’s balance sheet has stalled, leading strategists to pare down their predictions for the scale of the US central bank’s interventions in financial markets this year.

For the week ending July 15, the size of its balance sheet steadied at $7tn, a small uptick from the week before but roughly $210bn lower than the peak reached on June 10.

The incremental rise — which comes after a 71 per cent expansion of the balance sheet since the start of year — follows a period of modest or declining usage for the emergency programmes the Fed had put in place since March to shore up markets affected by the coronavirus outbreak.

Another pillar of the Fed’s toolkit involves unlimited purchases of government debt, which have also been moderated. Declining appetite for the Fed’s dollar swap lines from foreign central banks has also been a factor, while last week the volume of the Fed’s operations in the repo market wound down to zero.

According to Financial Times calculations based on Fed data published on Thursday, just $104bn of the central bank’s firepower has been deployed through 11 emergency facilities that operate under powers that allow it to make purchases in “unusual and exigent circumstances”.

That is 4 per cent of the minimum $2.6tn the central bank said it would make available through those facilities — an amount essentially unchanged over the past seven weeks.

Usage of the Primary Dealer Credit Facility, which provides loans of up to 90 days to approved dealers of government debt, has continued to fall, as has demand for a programme aimed at supporting money market mutual funds.

Marginal increases in usage for facilities targeting corporate credit markets and small to medium-sized businesses, among others, have done little to offset these contractions.

Given the minimal take-up of emergency facilities, as well as the robust recovery in financial markets the Fed engineered through its pledges to act, strategists have revised lower their forecasts for the size of the Fed’s balance sheet by year-end.

An updated consensus of analyst forecasts compiled by the FT showed that the balance sheet was expected to rise to $8.5tn by the end of 2020, roughly $1tn lower than the year-end level assumed in May. 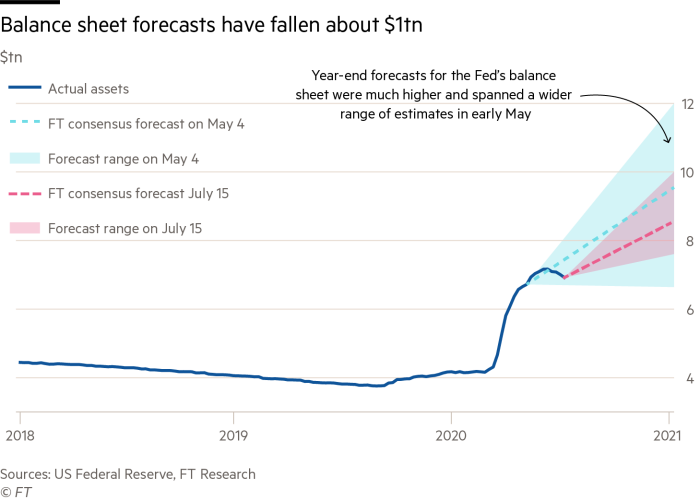 According to Krishna Guha, vice-chairman at Evercore ISI, the primary driver of the Fed’s balance sheet would be the central bank’s purchases of Treasury bonds and agency mortgage-backed securities. It has committed to buying at a pace of at least $120bn a month.

While some investors have flagged concerns that terms and conditions of the programmes were deterring demand, Praveen Korapaty, chief global rates strategist at Goldman Sachs, said the low take-up was a positive development underscoring the current health of financial markets.

John Williams, New York Fed president, alluded to this point in a speech delivered on Thursday, calling it a “measure of success”.

Robert Tipp, head of global bonds for PGIM Fixed Income, was among those to brush aside any concerns about a contracting Fed balance sheet, noting that the central bank’s support remains not only significant but also flexible.

“They are now down from an unsustainable and spectacular level of liquidity injections to what is simply seen as an incredible level,” he said. 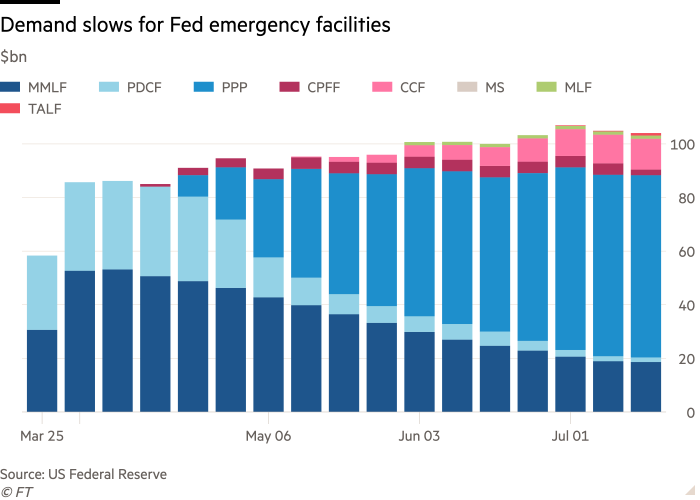