Europe is set for an economic rebound in the third quarter, but high-frequency data indicators point to slowing momentum in countries which have seen a resurgence of cases of the virus — particularly Spain.

This has prompted economists to warn that the recovery might be slower than previously thought.

The eurozone economy will grow by 8.6 per cent in the third quarter, according to the consultancy Oxford Economics. That would be the fastest pace since records began in 1995, but it would only partially claw back the record fall in output in the second quarter.

The coronavirus pandemic plunged the eurozone into a historic recession, with gross domestic product falling by 12.1 per cent quarter on quarter in the second quarter of 2020, following a decline of 3.6 per cent in the first three months of the year.

There was an initial rebound in June and the pace of the recovery depends on activity continuing to improve, but economists warn that the trend is threatened by the resurgence of infections in several parts of the bloc.

Sentiment indicators such as consumer and business surveys and alternative economic data, such as mobility and restaurant bookings, show that the recovery continued in July and August, but they also suggest that activity is losing momentum in some countries.

Both types of measures are less comprehensive and reliable than official data, but they have become widely watched since the pandemic as they offer a more timely gauge of the economy.

Alternative indicators are also now more difficult to interpret as the changes in output are less dramatic than during lockdown and they fail to account for seasonal effects.

“The key test of the V-shaped recovery thesis is likely to come with the restart of schools, and whether that helps drive . . . [activity levels] higher, or instead results in more local lockdowns being introduced and activity rolling over,” said Marchel Alexandrovich, economist at the investment bank Jefferies.

The epicentre of Europe’s recession is Spain, which has seen the biggest surge in new infections. 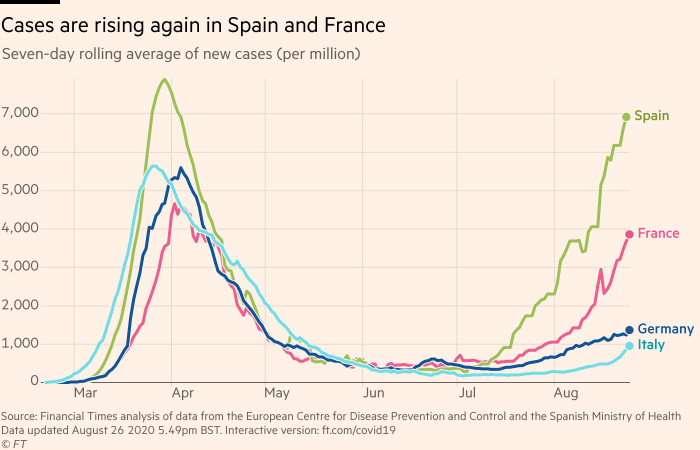 Sentiment indicators and high-frequency data suggest that it is increasingly having an effect on the country’s economy.

The number of trips to transport hubs, such as airports, train and bus stations, has declined in recent weeks, according to mobile phone locations tracked by Google. Trips to retail and entertainment venues, restaurants and bars also edged down week on week in mid-August.

Box office receipts also provide evidence of a fresh slowdown. After an initial post-lockdown rebound they fell sharply in the third weekend of August. 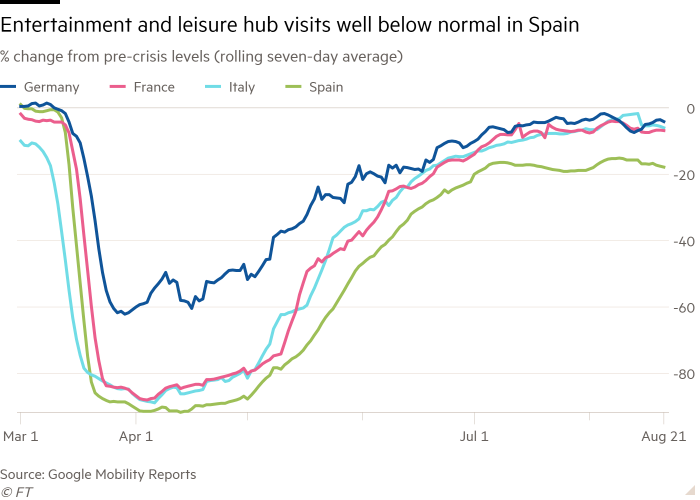 Normally this is the high season for Spain, when large inflows of international tourists fuel a jump in consumer spending. Last year turnover in food and beverage services was one-third higher in July and August than in the first two months of the year.

But the foreign visitors are largely missing this year.

Claus Vistesen, chief eurozone economist at the consultancy Pantheon Macroeconomics, noted that the Spanish economy came into the Covid-19 crisis as the euro’s star performer, but it is now at “the bottom of the pile”.

Spanish data “are starting to show signs of rolling over, indicating that the jump in new cases, and associated restrictions, are beginning to take their toll”, he said. Nicola Nobile, economist at Oxford Economics, said the recent restrictions introduced in Spain in a bid to slow the spread of the virus had caused her organisation to revise downwards its forecast of Spanish third-quarter GDP.

“While we are not yet committed to downward revisions in forecasts for other countries, the recent rise in infections has increased that probability,” she warned.

Jessica Hinds, Europe economist at Capital Economics, said the French recovery was likely to outpace that of Spain as the country is less reliant on tourism, has a larger IT and finance sector in which remote working is more common and has benefited from more generous government support.

Yet she warned that there was a risk that the French economy could plateau well below its level before the pandemic hit.

“France’s road back to pre-crisis levels will be protracted, and output is still set to be below its pre-virus level by the end of 2022,” she said.

Italy and Germany have registered much smaller numbers of new infections than France and Spain and alternative data and sentiment indicators held steady or improved in August.

But, in many other respects, their experience of economic recovery differs.

German output has fallen less severely than in other major economies — down 11.5 per cent in the second quarter compared to the end of 2019, compared to minus 17 for Italy and minus 18.9 for France — and in many areas activity has returned to normal levels. As of late August, Germany’s truck toll mileage index, a proxy for industrial production, was back to pre-crisis levels and German restaurant bookings were up on last year’s.

“Germany seems to be the most advanced in terms of experimental activity data,” said Carsten Brzeski, chief economist for the eurozone at ING Research.

But Italy needs to rebound from a much bigger fall that has wiped out more than two decades of growth and pushed up its already-large public debt.

So the north-south divide which plagued the European economy even before the pandemic hit looks set to be exacerbated by a two-speed recovery, economists warn.

“Recovery after the initial rebound will be much more uneven,” said Mr Brzeski. “It will take until next year, with the European Recovery Fund kicking in, before the gap between north and south should be narrowed.” 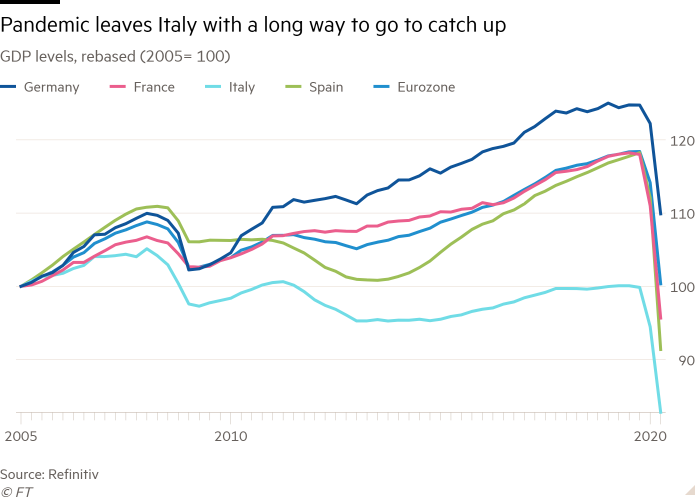