The flight to cities has long been an engine of development, producing sprawling metropoli across the world. But now Covid-19, which flourishes in areas of high human density, is forcing governments in emerging economies to rethink their approach to urban development.

According to UN data, more than half of the population of the world’s developing economies live in cities. But their often haphazard and unplanned growth has also brought large-scale squalor and inequality.

The virus has spread almost entirely in cities: according to the UN, at least 90 per cent of Covid-19 cases have been in urban areas.

While studies have shown a high correlation between rates of urbanisation and the impact of the virus at the national level, local conditions within cities appear to be more significant. High population density is the most obvious culprit, but two World Bank studies — one of New York and the other of 284 cities in China — show it is less a factor than it may at first appear.

“It is not about population density per se but about how that density is managed,” said Sameh Wahba, the World Bank’s global director for urban resilience and disaster risk management and co-author of the studies.

The pandemic . . . has shown, in a very dramatic way, where the vulnerabilities are in the urban system

“What matters is how the built environment can transform density from overcrowding to liveable density,” Mr Wahba said. “The worst results are invariably where you have a poorly built environment.”

As a result, the pandemic has become a catalyst for cities from Bogotá and Buenos Aires to Chennai and Jakarta to rethink their approach to urbanisation.

“The pandemic happens at a local level and has shown, in a very dramatic way, where the vulnerabilities are in the urban system,” said Eugune Zapata Garesché, managing director for Latin America and the Caribbean at the Global Resilient Cities Network. “There has been a revolution from local authorities around the world trying to step up and make decisions for local populations.”

David Faulkner, Asia Pacific president at the Urban Land Institute, said that in China, the virus had focused the attention of city governments’ officials on the benefits of environmental policy and smart city technology.

“Officials are saying, this is a good thing that put us ahead of the competition, and it’s pretty essential in terms of keeping cities going,” he said.

In many cities, the first initiatives to emerge from the crisis have attempted to make better use of urban space.

In Buenos Aires, Argentina, infrastructure is being rebuilt and families moved into new housing. In Bogotá, Colombia, agriculture is being brought into urban areas. The southern Indian city of Chennai has opened more than 100km of bicycle lanes. In Jakarta, city authorities have extended the geographical scope of car-free days and introduced pop-up cycle lanes — although the virus has also put on hold plans to build a new capital city in a bid to ease overcrowding. 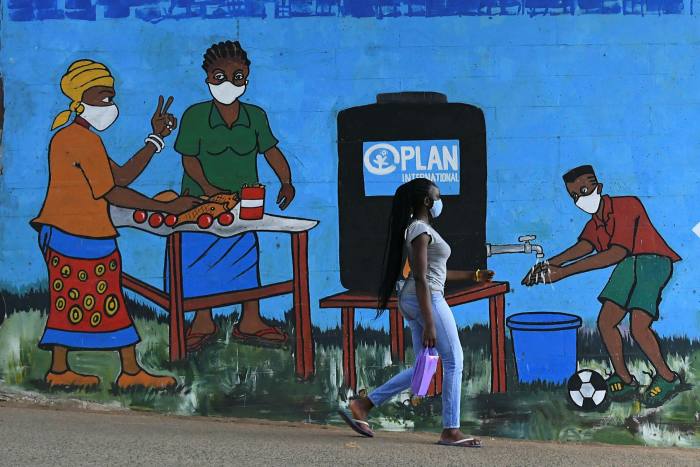 A woman walks past graffiti that promotes anti-Covid measures in Kibera, Nairobi © Simon Maina/AFP via Getty

The residents of Kibera, Nairobi’s largest slum, have created a network of handwashing stations many hope will now become permanent.

Local leaders raised funds to install the portable stations under tents and outside small shops across the sprawling settlement which, according to the UN, has an estimated population of 500,000-700,000.

Local organisation SHOFCO has 90 such stations in Kibera — part of a wider programme which has set up 318 of them across 11 slums. It estimates they have been used almost 38m times.

“It’s mainly a community-driven action, it is very interesting that the community took it upon themselves,” said Moses Omondi, a community leader with Kibera Emergency Response Team, a civil society organisation. “People want it. If people basically want it, it means now it’s the new order . . . Covid has advanced that (hygiene) opportunity.”

As he washed his hands outside the Kibera Town Centre, an organisation which provides free clean water to refill some of the stations, 31-year-old unemployed resident Jackson Mulinge said: “We want them to stay.”

Some cities are also expanding their financial support for local populations. Many local leaders who were advocates of minimal government have embraced expansionary policy in the face of the crisis.

Rodrigo Corradi of Local Governments for Sustainability, a global network of local and regional bodies, cited the example of Latin American cities that have launched income transfer programmes to support the poor during the pandemic, bolstering their incomes in addition to national government schemes.

“This was not previously something that was ever discussed at the local level,” Mr Corradi said.

Another idea that is becoming more widely discussed is that public transport can no longer be run on a self-funded model, and so will require greater subsidy. Raquel Rolnik, an architect and urbanist in São Paulo, noted that many cities in the developing world have grown in recent decades under policies that prioritised the oil and auto industries and put private and public transport on wheels rather than rail alternatives.

As well as leaving a chaotic legacy in mass transit, she argued, it has also supported the growth of slums — the only option for workers unable to afford the cost of formal urban housing, and places where the virus has spread most easily.

The pandemic has brought such issues to the fore, she said, by “show(ing) us the limits of the current system . . . but it is still too early to say whether this traumatic experience will shake up the forces that support it”. 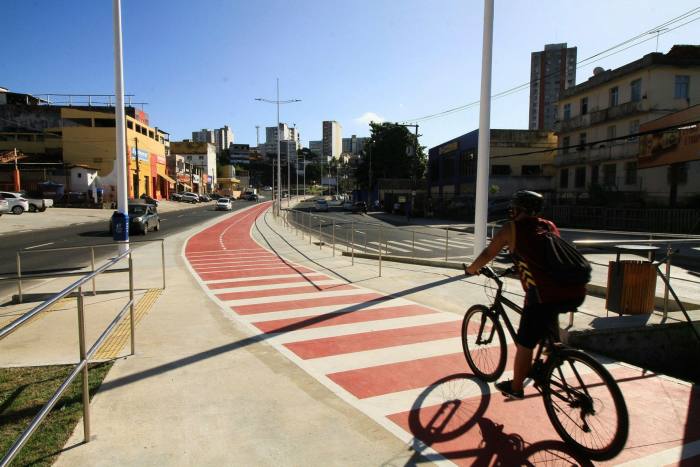 Every working day, Antônio Lima cycles 7km from his home in the suburbs of Salvador in north-eastern Brazil to his job at the city hall.

Since April, in addition to the financial, fitness and environmental benefits, the 57-year-old economist has also been earning time off: for every 15 days he cycles to work, the city gives him an extra day’s holiday.

“There are a lot of hills but I get there without too much sweat,” he said. “This is something that will change people’s lives.”

The scheme aims to encourage social distancing by getting people off public transport, and to take others out of their cars, easing congestion on the streets.

It is one of a series of measures introduced by the city in a bid to adjust its economy to the pandemic. Others include expanding cycle lanes, closing city centre streets to motor vehicles, licences for bars and restaurants for outdoor tables and assigned spaces for informal street vendors.

Antonio Carlos Magalhães Neto, Salvador’s mayor, said that while measures such as the cycling incentive were designed to encourage more of the city’s economy to move outdoors during the pandemic, many of them would last beyond the immediate crisis.

“Things will change definitively. There will be a cultural change in the relationships between citizens and public spaces,” he said.

However, unable to print their own money, many urban governments across the developing world are strapped for cash.

Mr Wahba expects developing cities’ revenues this year to fall by as much as 25 per cent. Only the biggest have access to global financial markets; the rest rely on local sources, including transfers from national governments.

Warren Smit, research manager at the African Centre on Cities at the University of Cape Town, said cities in South Africa had responded to the pandemic by moving people from high-density city neighbourhoods to temporary housing often built out of shipping containers on the outskirts.

However Mr Smit noted: “They’re in a Catch 22 where there’s going to be a need to deal with the challenge of informal settlements but less resources to do so.”