A new month has begun, and once more hopes of a Covid-19 vaccine are helping to defuse risk aversion. Global equities have begun July on a mixed note, although the mood improved in New York with technology stocks propelling the Nasdaq to a record closing high.

The US dollar, government debt and gold also experienced choppy trading conditions. The price action highlights how numerous cross currents are affecting market sentiment, with strong gains since March requiring evidence of a robust recovery in the coming months. Whether a clearer sense arrives tomorrow via the US jobs report for June (with a forecast hiring gain of 3.1m) is debatable.

Steve Englander at Standard Chartered notes a weaker jobs figure would paint a dour picture given the current employment support measures in place. He says:

“The ambiguity lies in how much the job maintenance requirements of some programmes induce temporary hiring. A strong number could reflect economic improvement or fiscal incentives to hire.”

A survey of private sector hiring in June from the payroll processor ADP (up 2.37m yet below a forecast 2.9m gain) only highlights the difficulty of gauging the true underlying employment picture. ADP dramatically revised its May figure to a gain of 3.07m from an original estimate of minus 2.76m.

That prompted this observation from Joshua Shapiro at MFR, the economic consultancy in New York:

“Given the size of the May revision, there is simply no telling how valid the June tally is versus reality or what will be reported by the labour department tomorrow.”

Equities and credit have certainly rallied hard in recent months, with opinion divided over whether this reflects expectations of a robust (and more importantly) a sustainable economic bounce in the coming months, or the welter of monetary and fiscal support that has flowed since March.

Further gains in risk assets and a renewed rotation led by cyclical or economic sensitive equity areas requires solid data and, yes, additional dollops of fiscal stimulus. Plenty rides on expectations of a forecast V-shaped recovery in corporate profits during the second half of the year.

Andrew Lapthorne at Société Générale notes that companies with bad balance sheets are once more showing signs of pressure and “without the V-shaped recovery in profits, this issue will only intensify”.

Switching gears, the outlook for sovereign bonds is also looking interesting here, particularly for the 10-year US Treasury note and among shorter-dated interest rates.

Citi’s William O’Donnell highlights how buyers have lately crowded into 10-year Treasury notes that leaves them vulnerable in the event of a robust jobs figure. Indeed, economists at Citi expect a gain of 5.5m jobs in June, well above the consensus forecast of 3.1m. And as Bill notes:

“The set-up for a reactive move — in Treasury yields — does seem pretty good here — especially if our economists have the direction and magnitude right for June.”

One aspect of a robust data tone in the coming months is that it may well raise the prospect of less stimulus arriving. Earlier this week Andrew Haldane of the Bank of England explained that his recent vote against expanding central bank bond purchases reflected his expectation of a strong recovery.

Many analysts think the recovery process is very much a long journey, with the danger that an initial flurry ebbs once 2021 beckons. The latest surveys of global manufacturing data released today affirmed that while a trough was set during the recent quarter, they do not provide insight about future demand and supply chain pressures.

“The worst may be behind us, but normalisation is a long way away, and the debate surrounding the role of monetary policy on the path to recovery is only just beginning.”

Indeed, Geoff argues that for now, fiscal policy is crucial for filling the current output gap, and “continued central bank support is needed if fiscal expansion can proceed without market disruption”.

On that point, Standard Chartered’s Steve says the extent of US job losses from shutdowns entails “an aggressively stimulatory policy stance” from the Federal Reserve, particularly given the risk that once employment support measures end, workers are dismissed.

Maintaining relatively calm waters across financial markets is clearly the preferable approach from here. Blowback from markets across the broader economy is the last thing that policy officials want to see.

One fluttering flag of risk aversion is identified by the global market strategy team over at JPMorgan, led by Nikolaos Panigirtzoglou. They note the return of an inverted relationship between short-dated US interest rates as shown below and observe:

“The lesson we learnt from the past two years as well as from the previous cycles is, as long as the inversion at the front-end of the US yield curve persists, it may act to limit the upside to equity and risky markets and signals vulnerability to further negative shocks.” 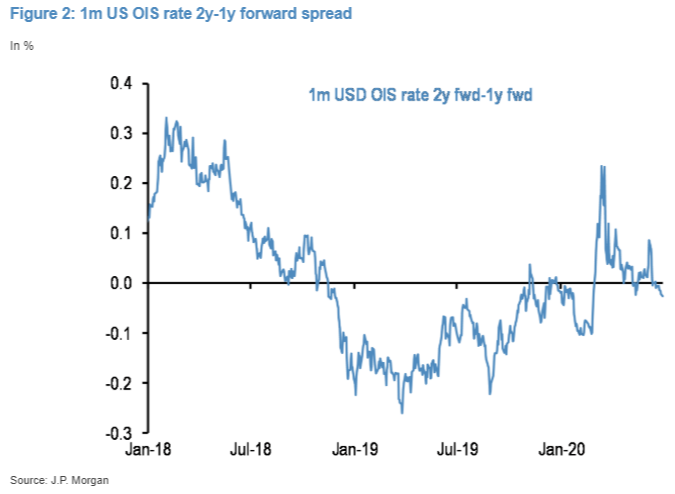 For now this negative relationship is nascent, but an inversion that mirrors what occurred last year would arouse concerns that the economic recovery lacks sufficient stimulus.

JPM notes that other developed world interest rates markets are also experiencing inverted curves among short-dated maturities. Some of this reflects expectations of negative interest rate policy being adopted at some stage by the likes of the UK.

For JPM, these are signs “that rate markets are signalling the need for further monetary and/or fiscal policy stimulus across developed market economies. If this additional stimulus is not delivered then the inversion at the front end could worsen, eventually becoming a more problematic signal for equity and risky markets.”

Gold has faded from early gains but retains allure with investors looking well past near-term deflationary pressure. Overnight, gold futures briefly popped above $1,800 an ounce, for the first time since late 2011.

“Alongside the hedge against debt monetisation and central bank largesse is also the added kickers of persistent virus uncertainties and geopolitical tensions which continue to fuel upside momentum in gold. A retest of the all-time highs at $1,924 is on the cards before year end.”

The Federal Reserve meeting minutes from last month revealed policy officials expect interest rates will remain low for some time, with a consumer rebound in the coming months seen fading into 2021.

In truth, the central bank has good reasons for maintaining a cautious approach, given the current spike in Covid-19 cases across the US sunbelt states. Beyond the minutes, perhaps one area that warrants close attention in the coming months is that of US banks. The Fed’s recent move to cap bank dividends and halt buybacks suggests officials expect hefty loan losses across the broader economy.

After an 11 per cent rise during the second quarter, S&P financials remain a quarter lower on the year. The performance of US and global financials looms large for broader risk appetite over the coming quarter.

I’d love to hear from you. You can email me on [email protected] and follow me on Twitter at @michaellachlan.