US health secretary Alex Azar has raised the possibility of a trade deal with Taiwan during a historic visit to the country this week in remarks that are likely to trigger protests from Beijing.

Wrapping up the three-day trip on Wednesday, during which he met President Tsai Ing-wen, her national security adviser and foreign and health ministers, Mr Azar said his talks had touched upon a “bilateral trade arrangement”.

“The purpose of my visit is to highlight the deep partnership and friendship between Taiwan and the US,” Mr Azar said, without elaborating on the proposed trade arrangement.

The health secretary is the most senior US cabinet official to visit Taiwan since the US switched diplomatic relations from Taipei to Beijing in 1979. His visit comes at a time of increased tensions between Washington and Beijing over Hong Kong, international trade and the growing global reach of Chinese technology companies.

Taiwan is a member of the World Trade Organization but remains shut out of most of the bilateral and regional trade deals that have grown around the global trade body over the past decade. Beijing insists that other governments help it isolate Taiwan, which China claims as its territory.

Mr Azar repeatedly emphasised he came with a message of support and friendship from US President Donald Trump and took a swipe at China for allegedly withholding information on coronavirus. The pandemic started in the Chinese city of Wuhan.

He said his trip recognised “Taiwan for its vibrant, open, democratic and transparent society . . . that contrasts with the conduct of the Chinese Communist party”.

“China could and should have shared more information on the virus,” he said.

Beijing sees the trip as a provocation. However, Mr Azar’s stance remained within the framework of Washington’s Taiwan policy, which maintains that bilateral relations are unofficial. He referred to Taiwan as a jurisdiction rather than a country during the visit.

China, which threatens to invade Taiwan if it refuses to submit to its control indefinitely, has sternly protested against the trip.

On Monday, as Mr Azar headed into a meeting with President Tsai, Chinese fighter jets crossed the Taiwan Strait median line, an unofficial dividing line between the two countries. Both sides have traditionally respected the line to avoid conflict. But the Chinese military has begun violating it regularly this year. 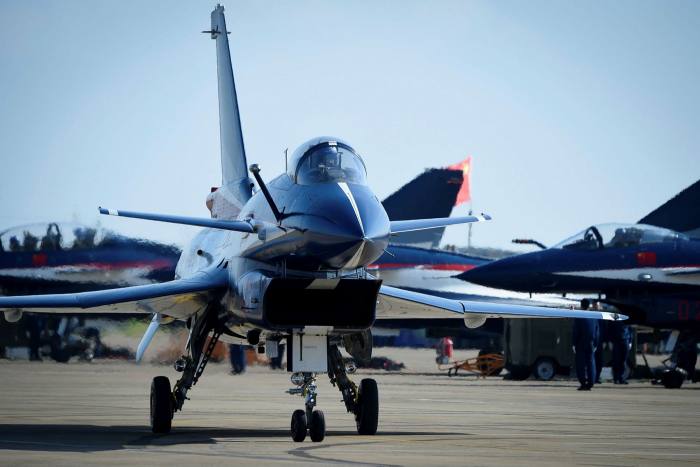 A file picture of a Chinese J-10 fighter jet. Chinese fighters flew across the median line separating the country from Taiwan this week as US health secretary Alex Azar paid a visit to Taiwanese President Tsai Ing-wen © AFP/Getty Images

Taiwan’s military responded to the incursion with unusually strong rhetoric, saying China was “bursting through our door and forcing their way into our home”. It said it was adopting a set of calibrated responses to deter future incursions. A defence ministry spokesman said these would include tracking the jets with anti-aircraft missiles.

Mr Azar said he would campaign for Taipei’s participation in global health exchanges including the World Health Organization. Taiwan is excluded from the WHO due to Chinese pressure.

While senior officials in the White House, the State Department and the Pentagon have pushed for more support for Taiwan, trade officials in the Trump administration have shown no interest in a trade deal with the country.

Taiwan has sought a trade agreement with the US for years but its strict rules on ractopamine, an animal feed additive, have kept it from allowing imports of US pork.