The US economy grew in the third quarter at its fastest pace in postwar history as activity bounced back from coronavirus lockdowns, offering an opportunity for Donald Trump to tout the economic recovery in his final pitch to voters ahead of Tuesday’s presidential election.

The jump in gross domestic product was worth 33.1 per cent on an annualised basis, the measure used by the US commerce department’s Bureau of Economic Analysis. Economic output rose 7.4 per cent compared with the previous quarter, according to the metric used by many other advanced economies to report GDP.

However, with the figures masking the impact of rising Covid-19 cases, and output remaining below pre-pandemic levels, Mr Trump might still struggle to win over voters in the final days of the presidential campaign.

The US president, who is facing an uphill battle to win a second term against Democratic challenger Joe Biden, posted a tweet about the figures ahead of rallies in Florida and North Carolina later on Thursday.

“GDP number just announced. Biggest and Best in the History of our Country, and not even close. Next year will be FANTASTIC!!!” Mr Trump wrote. “However, Sleepy Joe Biden and his proposed record setting tax increase, would kill it all. So glad this great GDP number came out before November 3rd.”

Mr Trump and his top officials had talked up the GDP data ahead of its release, knowing it was likely to exceed the previous record of 16.7 per cent annualised growth recorded in 1950. The increase in the third quarter followed a 5 per cent contraction in the first quarter and a 31.4 per cent drop on an annualised basis in the second quarter, when the economic fallout from the pandemic was at its worst.

While the improvement between July and September was slightly stronger than had been expected by economists, it masked concerns that the recovery has been incomplete and uneven.

According to the US labour department, 10.7m fewer Americans were employed in September compared with February, before coronavirus began spreading across the country.

Thursday’s data come amid fears that the US economic rebound is slowing as coronavirus cases rise and the effects of fiscal stimulus fade. Mr Biden has argued that the US president’s mishandling of the pandemic has exacerbated the economic crisis, and that Mr Trump is out of touch with the struggles experienced by many households. 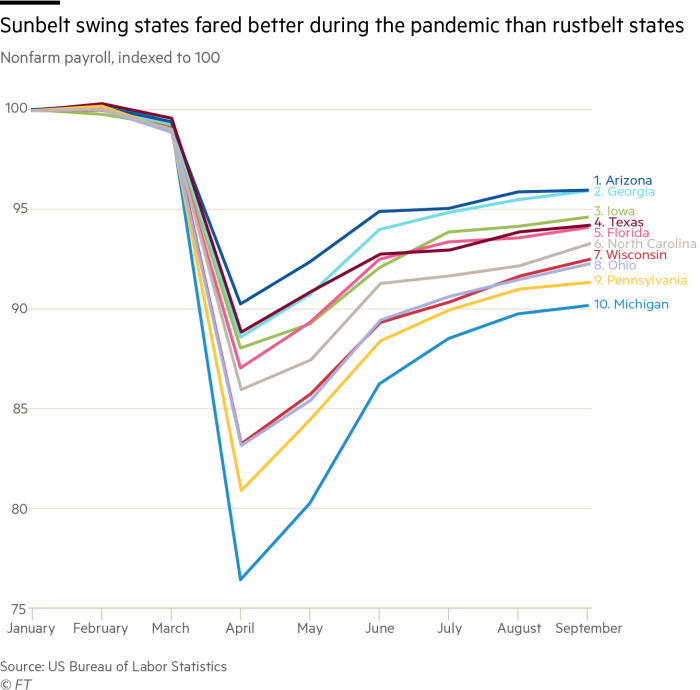 “This report underscores three inescapable truths about Donald Trump’s economy: we are in a deep hole and President Trump’s failure to act has meant that Q3 growth wasn’t nearly enough to get us out of; the recovery is slowing if not stalling; and the recovery that is happening is helping those at the top, but leaving tens of millions of working families and small businesses behind,” the Democratic nominee said in a statement.

The third-quarter data showed a 40.7 per cent surge in consumption as Americans returned to spending, particularly on durable goods such as home appliances and cars. Private investment increased sharply as well, by 83 per cent, with equipment posting strong gains, and residential investment rising, in a sign of strength in the housing market. 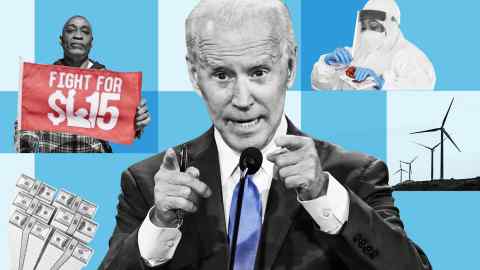 But there were other less encouraging signs: government spending fell 4.5 per cent while investment in structures dropped 14.5 per cent.

“The reality is that the GDP numbers demonstrate that the US economy did indeed rebound strongly as lockdown measures were lifted,” said James McCann, senior global economist at Aberdeen Standard Investments. “But given that boost is behind us, Covid infections are surging again and Congress cannot agree on another stimulus package, such good numbers are not going to last.”

Initial applications for unemployment benefits dropped 40,000 in the week ending October 24 from the previous week’s revised level, according to the US labour department. That compared with economists’ forecast for 775,000 claims.

Though claims have dropped from a record 6.87m in March, they remain well above their peak during the 2008 financial crisis.

The federal Pandemic Unemployment Assistance programme, which offers benefits to the self-employed and others who would not qualify for regular benefits, registered 359,667 new claims on an unadjusted basis, up from 344,905.