For Guo Ping, chairman of Chinese technology group Huawei, Monday was a day like any other. In a speech in the southern Chinese city of Shenzhen, he painted a rosy picture of how Huawei’s technological prowess and leadership in 5G telecoms equipment would transform the company’s hometown into a global digital showcase city.

Hours later, that promise was shattered — shot down by an announcement from the US government that it will use the global dominance of American technology to cut off all supplies of semiconductors to Huawei.

In boardrooms and government offices around the world, the new rules sparked frantic discussions about whether the move would deliver a fatal blow to the $122bn company, how quickly Huawei might fold, and what the collapse of the world’s largest telecoms equipment provider would mean for networks in 170 countries that run on its hardware.

While some analysts spoke of it being a “death sentence”, others wondered what lengths Beijing would be willing to go to protect a company at the heart of recent US-China tensions.

One European telecoms executive calls the prospect of the leading supplier in the market collapsing “catastrophic”. Networks are already having to shoulder the cost of reducing the amount of Huawei equipment under growing political pressure in western countries from Australia to the UK. The burden of a Huawei collapse is most likely to be felt by incumbent telecoms companies like BT, Deutsche Telekom and Swisscom, argues one executive, given their use of the Chinese company’s kit in broadband networks.

But for Washington, this is the climax of a 15-year battle against Huawei that began when the company tried to enter the US market for the first time in the early 2000s. 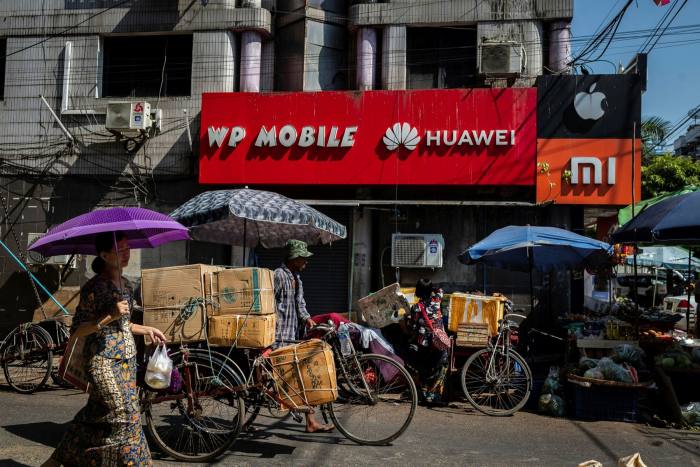 Longtime observers say the US is getting close to a goal that has proved elusive. “How do you kill Huawei?” asks Duncan Clark, chairman of China technology and telecom advisory company BDA, of the US dilemma. “Like with a worm, you cut off the head and it keeps going.”

Driven by the belief that Huawei could enable the ruling Chinese Communist party and its military to spy on other countries and their companies, undermine their national security and steal their commercial secrets, the US government used every option open to it. It stopped Huawei acquisitions of American companies and assets through its national security review for foreign investments. It leaned on leading US telecoms operators not to work with the company and it conducted a Congress-led probe into the firm. It pursued a criminal prosecution which put Meng Wanzhou, Huawei’s chief financial officer and daughter of its founder, under house arrest in Canada, awaiting the outcome of an extradition hearing.

Last year, the administration started targeting Huawei with sanctions, two earlier rounds of which proved porous. This time, industry experts say it is hard to see how Huawei can wriggle out of Washington’s noose.

“Handsets and base stations require semiconductors. These two business lines make up 90 per cent of Huawei’s business; without being able to manufacture these products, the company would no longer look like Huawei,” says Dan Wang, technology analyst at Gavekal Dragonomics, a research firm, in Beijing. Earlier this week, Mr Wang called the new US rules a “death sentence”. 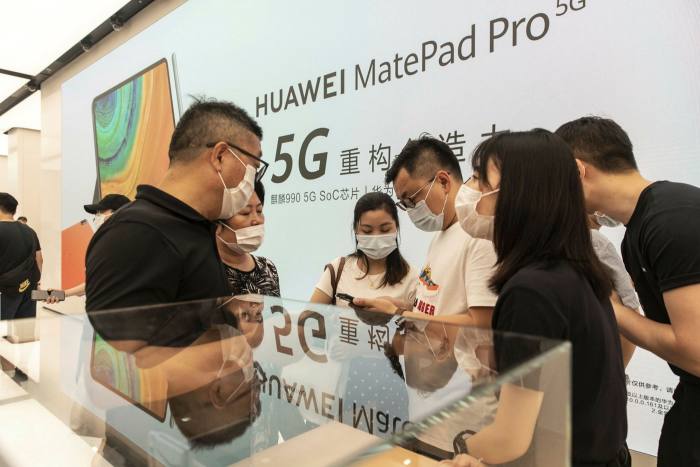 The new flagship store in Shanghai is Huawei’s largest in the world . . . © Qilai Shen/Bloomberg . . . with a business area of nearly 5,000 sq m meters, according to the company © Qilai Shen/Bloomberg

Death, however, is not imminent. Huawei has been building stockpiles of chips since Washington stepped up the pressure on the company two years ago. While industry experts say that reports about it having amassed two years of inventory are overblown, they believe that Huawei has enough chips to keep it going for another six months.

That would take it past the US election in early November, and the inauguration of the next US president. Some analysts say the possibility that Donald Trump, whose administration has zeroed in on China as a threat to America, might be voted out of office offers a glimmer of hope to Huawei due to Democratic nominee Joe Biden’s record of a less confrontational stance towards China. Even the latest rules allow for issuance of temporary licences under which chip supplies could resume.

But those hopes are slim. “A lot of people in the Chinese government are looking at (Joe Biden’s lead in the) Florida polls right now. But long-term thinkers in China understand that the policy space for Biden will be limited as well,” says Hosuk Lee-Makiyama, director of the Brussels-based European Centre for International Political Economy, who as a trade lawyer previously investigated Huawei for the EU. He adds that any potential honeymoon period for Beijing with an incoming Biden administration is unlikely to last because China cannot reverse the key policies and laws which have hardened western governments’ stance against Huawei and China more broadly. At its core is Beijing’s national security law, which requires companies and citizens to assist the security services in whatever they may demand and which has fed fears of spying. Another issue certain to continue to trouble relations is Beijing’s move to curb Hong Kong’s autonomy, civil rights and rule of law.

Under that scenario, Huawei’s future looks dark. Washington last week stopped rolling over temporary licences for US companies to sell chips to the company. Rules imposed in May, and the additions that followed this week, mean that no company anywhere in the world can sell chips to Huawei directly or indirectly if they were designed using software tools made by US companies including Cadence and Synopsys, or manufactured using equipment from US suppliers such as Applied Materials or LAM Research.

Taiwan Semiconductor Manufacturing Corp, the world’s largest contract chipmaker on whom most chip design houses rely to produce their semiconductors, will stop shipping to Huawei on September 15, the deadline imposed in May. Monday’s additional restrictions also block supplies of any other chips, be it memory chips from South Korea’s Hynix or semiconductors from Dutch company NXP. 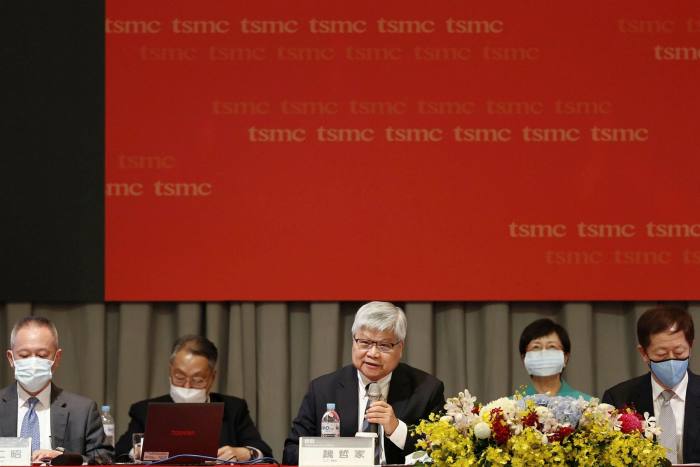 “None of these companies is free from US content, the door is slammed shut,” says a European trade official in China.

The prospect that British chip design company Arm will be taken over by Nvidia of the US has added to Huawei’s predicament. A person at HiSilicon, Huawei’s chip design affiliate, says that if the deal happens, all of the Chinese company’s chip design would be in trouble because its designs are based on Arm-licensed blueprints.

Some of the company’s almost 200,000 employees are putting on a brave face. “I feel that everyone is quite calm because we still have a lot of projects on hand which are not finished yet, and governmental projects are also coming,” says an employee at Huawei Cloud, adding that the division remains viable. 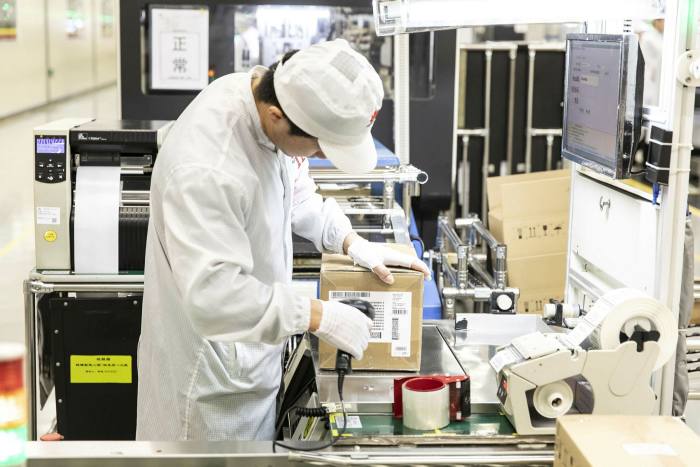 But experts challenge such claims. Mr Lee-Makiyama says the cloud business, which is much more profitable than Huawei’s devices arm, is in as much trouble as the rest of the group because the server hardware that any cloud services run on needs semiconductors, while much of the cloud software is American, including databases from Oracle and virtualisation services from VMware.

Some observers believe the Chinese government will step in. “Huawei is too big to fail,” says a semiconductor industry executive in Taiwan. “Beijing will surely help them.”

The question is how. Mr Wang contends that money — Beijing’s time-tested approach to the tech industry — will not do the trick. “The company declared around $53bn in cash and short-term investments in its last annual report, so it has substantial resources. What it lacks are chips. In the short term, it’s not possible to create a semiconductor supply chain that does not touch US technology,” he says.

Some believe Beijing will force Chinese chipmakers — which also continue to rely on US software and equipment — to supply Huawei. “They can reorganise the domestic chip industry in whatever way they like,” says the Taiwanese executive. “You could form an intermediate layer between suppliers and Huawei, and it may be possible to hide your tracks a little.” However, such a high-risk scheme, in violation of American sanctions, could undermine Beijing’s ultimate aim to build its own semiconductor industry. Trade lawyers predict that any Chinese chipmaker trying to ship to Huawei in violation of US rules will quickly be targeted by US sanctions, hampering Beijing’s quest for technology self-sufficiency.

Customers across Europe are already weaning themselves off Huawei’s equipment — the result of the political pressure exerted by the US. “There is a much bigger risk to using Huawei now due to the microchip sanctions,” says one executive at a leading European telecoms company that has used a large amount of Huawei equipment in the past. “(Huawei’s struggles) will change the balance of power. We need someone like Samsung to step in fast (to supply equipment),” he adds.

Telecoms companies have started to reorganise their plans, particularly for 5G upgrades. The Chinese company, market share of almost 50 per cent of some 4G networks, has largely lost its role as “primary vendor”, with companies including BT and Three turning to Ericsson as an alternative supplier. But four operators contacted by the Financial Times have yet to draw up contingency plans for a scenario in which Huawei collapses, an indication that some in the industry at least see it as resilient even in the face of the latest US onslaught.

Many executives at telecoms carriers argue that networks would not grind to a halt if Huawei were to collapse, but it would rob the industry of the ability to easily maintain networks and probably cause significant disruption to customers due to an inability to upgrade software from the Chinese company and replace faulty equipment. “It would be super painful,” says one executive.

For Huawei, the pain will almost certainly be greater. Industry experts say it is hard to envision how the company could continue running its business in its current form under Washington’s seemingly watertight sanctions.

“The image of Huawei is now so associated with the fear of a ‘Red Peril’ that they need to make some trades,” says Mr Clark, adding that the Chinese government was certain to have a role in any restructuring. That, ironically, might transform Huawei into something the US has suspected it to be but the Shenzhen company always emphatically denied: a Chinese state company.