Hello from Washington, where we’re dealing with Dr Anthony Fauci’s chilling prediction that coronavirus cases could soon rise back up to 100,000 a day as states across the country race towards loosening their restrictions.

Our main piece today highlights some doom and gloom swirling around the US-Canada trading relationship, even as USMCA — Donald Trump’s new Nafta — comes into force. Our Person in the news is Democratic senator Ron Wyden, who has kicked up a fuss over allegations that Trump used trade talks with China to “advance personal interests”, while our chart of the day looks at the drop in EU-South Korea trade because of coronavirus.

Donald Trump’s revamped Nafta — the US-Mexico-Canada trade agreement — comes into force today, to much fanfare from its supporters.

Three years of talks have culminated in a deal that battled its way through Congress and now faces a few speed bumps over things such as policing the new labour rules in Mexico (US trade representative Robert Lighthizer warns he’ll be taking enforcement seriously) and energy sector regulation (US petroleum companies are already complaining that Mexican groups are being favoured).

But the biggest fight looming on the horizon is not with Mexico, but with the US’s northern neighbour, Canada. As another lobbying war rages in Washington, the Trump administration is apparently considering reimposing tariffs on Canadian aluminium.

To recap: in 2018 the US slapped a 25 per cent tariff on steel and a 10 per cent tariff on aluminium from Canada, among other countries, claiming that the imports posed a national security threat. The move fuelled a significant escalation of trade tensions with some of Washington’s closest allies, and prompted retaliatory Canadian duties on C$16.6bn ($12.2bn) worth of US goods. Tariffs on Canada and Mexico were only removed in May last year as part of the USMCA negotiations.

While nothing is certain, on Monday Canadian prime minister Justin Trudeau indicated that something was afoot, acknowledging that he had heard “musings and proposals” from US officials on the possibility of reinstating tariffs on aluminium, something allowed under USMCA if the US decides it needs to protect itself from Canadian aluminium. This is consistent with Lighthizer’s tone when he testified on the Hill a few weeks ago and discussed “surges” in Canadian metal exports to the US.

Canadian officials, meanwhile, say that in conversations with their US counterparts, they’ve pushed back against suggestions that Canadian aluminium exports are harming US industry. Ottawa said it was “hoping for the best but preparing for the worst”.

Business groups largely oppose the reintroduction of tariffs on Canada, which is widely seen as a US ally. The US Chamber of Commerce has put out a statement, along with Canadian and Mexican business groups, urging governments to “refrain from use of tariffs on national security grounds”.

The Aluminum Association, which represents the majority of US and foreign companies in the industry — including those that take the input metal and process it into sheet, foil and plate form — is unhappy. Fifteen US chief executives have written to Lighthizer saying they need a reliable source of input aluminium. They also point out that, while Canadian exports of raw aluminium to the US have increased since the Section 232 tariffs were removed, the volumes are at a similar level to 2017, and in keeping with the historical trend.

The large amount of power required to transform aluminium’s key ingredient, alumina, into refined metal has led most companies to anchor their production of raw aluminium in countries such as Canada, Iceland or Russia, where there is an ample energy supply. China, which subsidies its industry, is also a major producer.

Two companies lobbying hard for the reintroduction of tariffs are Century Aluminum, in which Glencore owns a stake, and Magnitude 7 Metals. Both were beneficiaries of the last round of tariffs on steel and aluminium imports, and have written to Lighthizer in recent weeks seeking to get the duties on Canadian imports reinstated, claiming they are “destroying” the US industry.

Mr Trudeau — who has refrained from overt threats of counter tariffs — said “punitive actions” by the US would “end up hurting Americans the same way they hurt Canadians”. “What we’ve simply highlighted is: the United States needs Canadian aluminium. They do not produce enough, nowhere near enough aluminium in the States to fulfil their domestic manufacturing needs,” he said.

It’s unclear whether the US will go ahead and reimpose tariffs, but if it does, there’s no reason to believe that Trudeau would not retaliate. Lighthizer has said that, according to the USMCA agreement, Canada could retaliate only in the sector where the US puts tariffs.

Such a move by Washington would not be a good fanfare for the launch of the new trade pact.

Measures taken by governments to prevent the spread of Covid-19 have affected the international trade in goods. EU seasonally adjusted trade (imports plus exports) with South Korea grew from €8bn in January to €8.5bn in February. In March, EU trade with South Korea fell to €7.8bn, then again to €6.5bn in April. 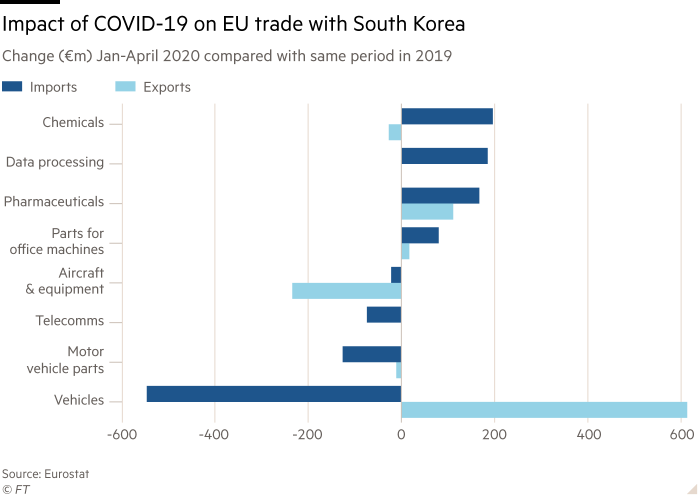 “I was critical of the initial China trade deal, because it appeared to prioritise the sale of soybeans from the electorally important states in the Midwest over more foundational issues like addressing intellectual property theft, forced technology transfers, and economic espionage,” Mr Wyden wrote.