Hello from Washington, where the death of Supreme Court justice Ruth Bader Ginsburg and the political battle over her successor is leading the news.

Our main piece today is on the recent US-UK trade shenanigans, in which the UK was reminded (again) that, yes, US lawmakers care about Ireland and, yes, that matters.

Our chart of the day looks at China’s purchases of US soyabeans, while today’s person in the news is Antony Blinken, Joe Biden’s top foreign policy adviser. Blinken has claimed that the Democratic presidential candidate would end the “artificial trade war” the Trump administration is fighting against the EU. This will presumably be music to Brussels’ ears.

What was the UK government thinking?

Last year seems a world away, but back then the issue dominating UK politics was the “backstop” — a measure in the country’s Brexit withdrawal bill intended to prevent a hard border between Ireland and Northern Ireland.

As British politicians tried to figure out ways to prevent a hard border on the island of Ireland while leaving the EU, US lawmakers issued loud warnings that a US-UK trade deal — held up as a top prize by Tory Eurosceptics in London — would be held up if the hard border was reimposed.

In a high-ceilinged reception room on Capitol Hill one evening in February last year, Irish foreign minister Simon Coveney urged prominent congressmen from both the Democratic and Republican parties to make sure the UK honoured the Good Friday Agreement (GFA), which underpinned the peace settlement in Northern Ireland, as it negotiated its departure from the EU.

Things eventually settled down. But the last week has seen British ministers reminded that US lawmakers matter. To put it bluntly, they can and will block a trade deal. As a reminder, Nancy Pelosi, the Democratic Speaker of the House, said there was “no chance” of a US-UK trade deal going ahead if the UK altered its withdrawal agreement with the EU to give British ministers the right to interpret key parts of the Northern Ireland protocol, which was designed to avoid a hard border with Ireland. Dominic Raab, UK foreign secretary, was then dispatched to some meetings on the Hill on a charm offensive.

There has been an active Friends of Ireland caucus on the Hill since the early 1980s, and it just so happens to be chaired at present by Richard Neal, who is also the Democratic chairman of the powerful Ways and Means committee, which holds the power to approve or block any US-UK trade deal. Pelosi also has a longstanding interest in Irish affairs, having joined Neal on a visit to Ireland last summer.

The power wielded over trade policy by lawmakers with Irish affiliations or interest is coincidental, which might be why British ministers keep forgetting about it. But they would be wrong to think this is just a matter of rhetoric for American politicians: lawmakers hold real power over trade policy and must approve any full trade agreements before they hit Donald Trump’s desk. As ever in the age of Trump — a president who takes no issue with circumventing elected representatives on matters of foreign policy — there are ways around Congress. He could, as he did with Beijing, strike a limited “mini deal” that would not be substantive enough to require Congressional approval. But both London and Washington say they want a full, real trade deal.

If there is any doubt about what a pain Congress can be to an administration trying to rush through a deal, look only to the US-Mexico-Canada Agreement, which Congressional Democrats managed to stall until they won extra protections for Mexican workers and the environment. Britain does not have time for that. As we’ve written before, there is a ticking clock — and it’s not the presidential election, which is a bit of a red herring here, but rather the Trade Promotion Authority. (See our previous note here).

It is not just House Democrats following the Irish issue, either. Yes, the Irish caucus is dominated by Democrats — there are 22 Democratic members to five Republicans, but there have recently been strong signals that a Republican administration under Trump would be averse to any threat to the GFA, too. Mick Mulvaney, Trump’s former acting chief of staff and now Northern Ireland envoy, recently warned UK prime minister Boris Johnson against creating a “hard border by accident”. More pointedly, he added: “The Trump administration, state department and the US Congress would all be aligned in the desire to see the Good Friday Agreement preserved to see the lack of a border maintained.”

So what was the British government thinking? Perhaps it didn’t think through the implications of breaking international law, or possibly it forgot about the big fuss that was made early last year, when the backstop was being discussed under a different prime minister. Either way, it’s hard to overstate the extent to which even appearing to have anything like a hard border on the island of Ireland would derail the prized deal between London and Washington.

The pandemic has put a serious spanner in the works for China’s commitments to purchase US goods under the “phase one” trade deal signed in January — but its soyabean purchases could help lessen the gap. The start of the US soyabean harvest is just around the corner and China has upped its import commitments compared with previous years. As of September 10, 24.9m tonnes of export sales from the US to China had been agreed in the year to date compared with 10m at the same point in 2017. 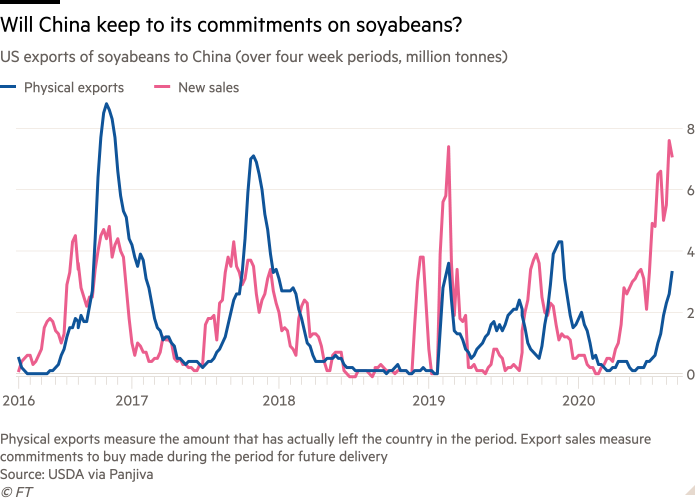 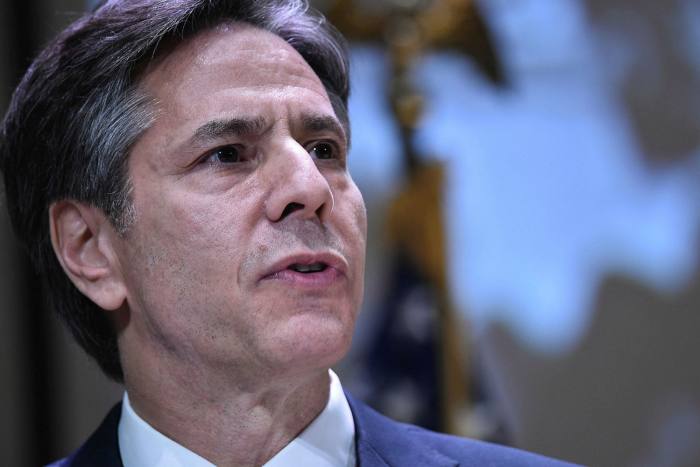 Blinken told a US Chamber of Commerce event on Tuesday that a Biden administration would end “an artificial trade war that the Trump administration started” with the EU.

He added that the US needed to “improve our economic relations” with the EU, given the bloc’s importance as a market, and because it was detrimental to fight with US allies.