Retail sales in the UK rose in August for the fourth consecutive month, helped by demand for home improvement goods, signalling that consumers continued to support the economic recovery through the summer.

The volume of retail sales in Great Britain rose 0.8 per cent in August compared with the previous month, data from the Office for National Statistics showed on Friday.

This was marginally higher than the 0.7 per cent expected by economists polled by Reuters.

August’s volume of goods sold in stores and online was 2.8 per cent larger than in the same month last year, the fastest annual increase since October 2019 and 4 per cent higher than in February, before the lockdown.

August’s increase marked an expected slowdown compared with the immediate post-lockdown rebound; the monthly growth was much lower than the 3.6 per cent recorded in July.

Spending on home improvements continued to rise in August as sales volumes in household goods stores increased 9.9 per cent compared with February. In hardware, paint and glass stores, sales were 12.9 per cent higher than before the lockdown.

Furniture, lighting and household appliance shops all registered higher sales than in February, which some analysts linked to the mini-boom in the housing market over the summer.

However, with people staying at home more, sales in clothing stores were still 15.9 per cent below February’s pre-lockdown levels despite improvements in August.

The ONS figures suggest that high-street stores remained under pressure despite the fourth consecutive monthly sales expansion, as consumers continued to shop online.

Online retail sales marginally dipped in August over the previous month, but the strong growth experienced over the pandemic has meant that sales were still 46.8 per cent higher than February’s pre-pandemic level. 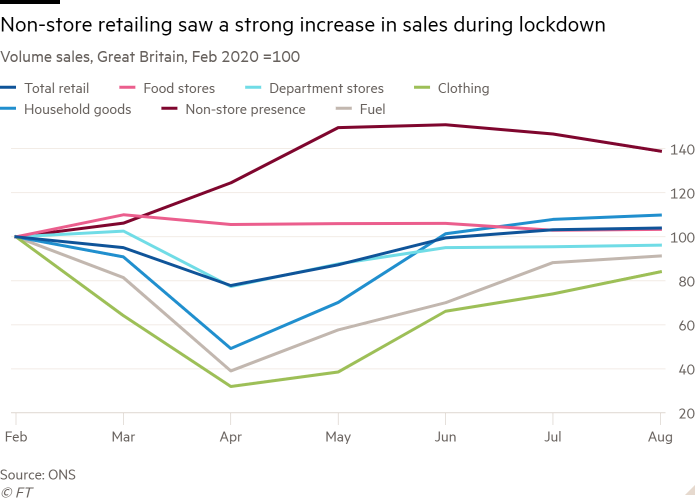 After the lockdown was eased, retail sales in Great Britain showed a stronger performance than many other sectors, recovering to their pre-pandemic levels in July as consumers spent money on goods — such as sporting equipment and food — instead of services, including going to gyms and restaurants.

Retail sales are the first official economic data for August and the monthly expansion supports the view that the UK economic recovery continued into the summer, helped by the government’s discounted dining out scheme.

However, economists warned that the consumer-led recovery might not last into the autumn due to rising coronavirus infections and fears of unemployment.

August retail data could be “a false dawn” for retailers, according to Lynda Petherick, head of retail at management consultancy Accenture UK and Ireland. “The recent tightening of lockdown measures, both locally and nationally, will be a bitter pill to swallow for retailers, and could lead to a steep drop in consumer confidence in September.”

Andrew Wishart, UK economist at consultancy Capital Economics, said: “The strength of retail sales is particularly striking in a month when non-retail spending, particularly on restaurant meals due to the Eat Out to Help Out scheme, also picked up. But spending may yet stutter as the furlough scheme is wound down and unemployment rises, weighing on household incomes and job security.”