UK job losses rose at a record rate in the three months to August, even as more furloughed employees returned to work and some companies began hiring, official data showed on Tuesday.

The Office for National Statistics said the number of redundancies increased by 114,000 on the quarter, the biggest jump since such statistics were first published in 1995, while the number of people claiming out-of-work benefits rose to 2.7m — more than double the level in March, before the coronavirus lockdown.

The unemployment rate rose to 4.5 per cent, up from 4.1 per cent in the previous quarter and 3.9 per cent a year earlier. This was driven by a fall in male self-employment.

The employment rate was 0.3 percentage points lower on both the year and the quarter, at 75.6 per cent — down by 480,000 from the start of the year, with the self-employed, young people and part-time workers especially hard hit.

“The jobs market deteriorated significantly over the summer, with the biggest rise in unemployment in over a decade taking place even while the economy continued to open up. With economic support falling just as lockdown restrictions increase . . . we should prepare for a major increase in unemployment over the coming months,” said Nye Cominetti, senior economist at the Resolution Foundation, a think-tank.

Alongside rising job losses there is also evidence of people returning to work during the upswing in economic activity seen over the summer. The ONS recorded a sharp quarterly increase in the number of vacancies, driven by small businesses.

It estimated that the number of people temporarily away from work — including furloughed employees — fell from 7.3m in the April-to-June period to 6.4m people in June to August.

Real-time data collected by HM Revenue & Customs — which the ONS view as the most timely guide to employment — show that the number of employees on companies’ payrolls rose by 0.1 per cent, or 20,000 people, between August and September, although it is still 629,000 lower than a year earlier. 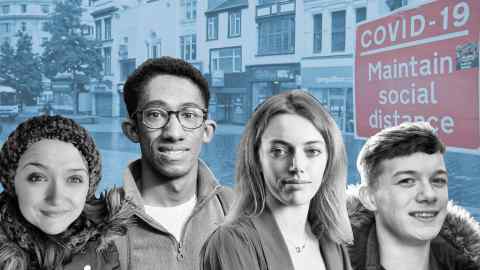 But economists said job losses were bound to climb, and new hiring slacken, as new Covid-19 restrictions come into effect while the government’s support for workers becomes less generous.

“The latest batch of data show that the labour market has been somewhat weaker than previously thought and that the fallout from the Covid-19 recession is intensifying . . . Worse lies ahead,” said Paul Dales, at the consultancy Capital Economics.

“These aren’t just statistics, these are people’s lives,” Rishi Sunak, chancellor, said in a response to the figures, adding that his “absolute priority” was to protect as many jobs as possible and help those who lost jobs back into employment.

But business groups, unions and charities are redoubling calls for the chancellor to do more to support workers whose jobs are in jeopardy as a result of spreading local lockdown measures.

Rebecca McDonald, senior economist at the Joseph Rowntree Foundation, said that while extending furlough in locked down areas would help, the chancellor’s new Job Support Scheme would do little to protect the jobs of low-paid workers elsewhere — underlining the need for the government to make the benefits system more generous and boost investment in basic skills.

Gerwyn Davies, at the CIPD body for HR professionals, said job prospects for young men in particular were worsening fast, and “much more immediate” public investment in training and reskilling was needed, beyond what had been announced so far.

Tuesday’s data paint a bleaker picture of the labour market than the ONS’s previous estimates: the agency revised its figures after finding its statistics had been skewed by changes to the way it conducts its research, brought in hurriedly as a result of the March lockdown.

Whereas previously it knocked on doors and conducted the initial stage of its labour force survey largely through face-to-face interviews, it has since March switched entirely to phone interviews. This led to a shift in the type of households answering the survey — with a higher proportion of owner occupiers and fewer renters.

The ONS said on Monday it had now reweighted its estimates and was confident that its headline measures now gave a better picture of the true state of the labour market — but because of the time taken to rework the figures, it had not been able to calculate all the details it would usually provide.