The UK economy expanded for the third consecutive month in July, fuelled by coronavirus-related restrictions being eased in the services sector, but growth slowed and output remained well below the pre-lockdown level.

The easing recovery, combined with a recent rise in the number of positive coronavirus cases and renewed Brexit uncertainty, prompted economists to warn that the government and Bank of England would come under pressure to take further action to stimulate the economy.

Gross domestic product in the UK grew 6.6 per cent in July compared with the previous month, data published by the Office for National Statistics on Friday showed.

The pace was slower than the 8.7 per cent registered in June and despite three consecutive months of expansion, in July the UK economy was still 11.7 per cent smaller than in February, suggesting the country is facing a long climb back from the 20.4 per cent quarter-on-quarter contraction in the second quarter, the largest of any G7 country.

“While it has continued steadily on the path towards recovery, the UK economy still has to make up nearly half of the GDP lost since the start of the pandemic,” said Darren Morgan, ONS director of economic statistics.

The services sector, which accounts for about 80 per cent of the economy, grew 6.1 per cent. The expansion was largely driven by the reopening in July of most of the hospitality industry, including restaurants, pubs and hairdressers.

Rishi Sunak, chancellor, said: “While today’s figures are welcome, I know that many people are rightly worried about the coming months or have already had their job or incomes affected. That’s why supporting jobs is our first priority and why we’ve outlined a comprehensive plan for jobs to ensure nobody is left without hope or opportunity.”

The path to a fuller recovery is being hampered by the tapering of government support for jobs, high Brexit uncertainty and rising numbers of positive coronavirus cases, analysts warned. “The prospect of a second wave is restraining consumer and business confidence, and firms continue to face cash flow difficulties,” said Rain Newton-Smith, chief economist, at the CBI business group. “With government support schemes coming to an end and renewed uncertainty over Brexit, clearly the road back to ‘normal’ is going to be a rocky one.”

More intervention would be required, from both the BoE’s Monetary Policy Committee and the chancellor, according to Samuel Tombs, chief UK economist at Pantheon Macroeconomics, a consultancy.

The depressed output “will ensure the MPC extends its asset purchase programme again in November or December, and will compel the chancellor to sign off more fiscal stimulus in the upcoming autumn Budget”, he said. 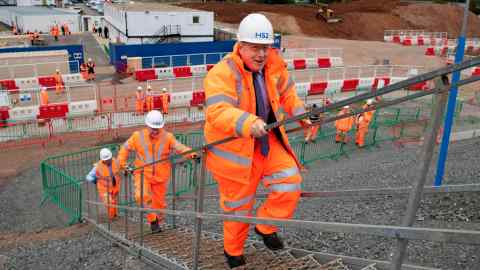 Despite many businesses reopening, growth in the services sector slowed from the 7.7 per cent expansion recorded in June and was lower than the 7 per cent rate forecast by economists polled by Reuters.

Accommodation and food service activities grew 140.8 per cent as lockdown measures eased, but output in this area was still 60.1 per cent lower than in February. Education grew 21.1 per cent as some children returned to school.

With many activities still strongly affected by social distancing measures, the services sector was more depressed compared with pre-lockdown levels than industrial production and construction.

Growth also eased in the manufacturing sector, falling to 6.3 per cent in the month, from 11 per cent in June. July’s weaker figure reflected an earlier reopening of the sector, in mid-May. 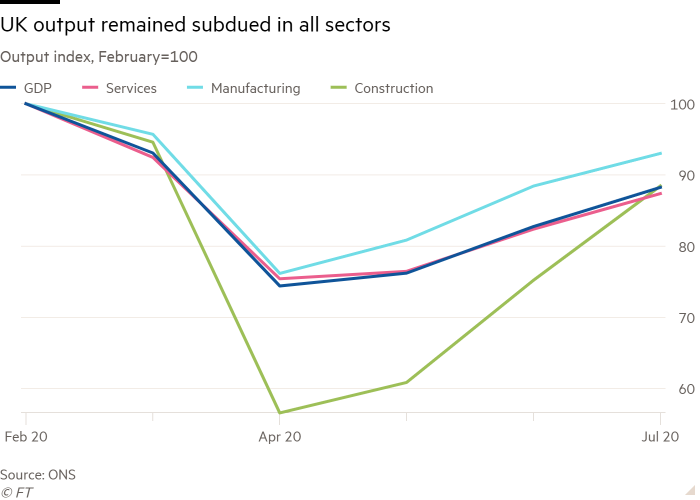 Construction rebounded more strongly, with monthly growth of 17.6 per cent. This was driven by a 30 per cent expansion in new housing, supported by government schemes, and reflected a deeper fall during the lockdown. Yet, output in the sector remains well below its pre-lockdown levels.

A full recovery in output is key for the prospects of the millions of furloughed workers and the survival of many businesses. According to the Bank of England’s August forecast, however, the UK economy is not expected to recover to pre-lockdown levels until the end of next year.