The UK economic recovery lost steam in October as tighter Covid-19 restrictions limited activity more than expected in both the manufacturing and services sectors, prompting further job cuts and fuelling fears of a renewed economic downturn.

The IHS Markit flash, or interim, purchasing managers’ index for services fell to 52.3 in October, down from 56.1 in the previous month and the lowest since June.

The reading was below the 54 forecast by economists polled by Reuters but remained above the 50 mark, which indicates a majority of businesses reporting improving activity compared with the previous month.

Chris Williamson, chief business economist at IHS Markit, said: “The pace of UK economic growth slowed in October to the weakest since the recovery from the national Covid-19 lockdown began.

“The slower growth of output, the renewed fall in demand and further deterioration in the labour market suggest the economy started the fourth quarter on a weakened footing,” he added, and with new curbs darkening the near-term outlook, “the risk of a renewed downturn has risen”.

The services sector accounts for about 80 per cent of the UK economy and bears the brunt of tighter restrictions.

Survey respondents overwhelmingly suggested that the latest setback for service sector output was due to a renewed downturn across the travel, leisure and hospitality industries amid tighter limitations on trade and local lockdown measures.

While it did not give any figures, the PMI report said: “October data indicated a steep fall in employment numbers, with another month of deep job cuts signalled in both the manufacturing and service sectors.”

Duncan Brock, group director at the Chartered Institute of Procurement and Supply, which conducts the survey with IHS Markit, said that “fears over inherent weaknesses in the UK economy materialised this month with a sudden fall in the overall index showing a sharp drop in new orders and a continuing erosion of employment opportunities”. 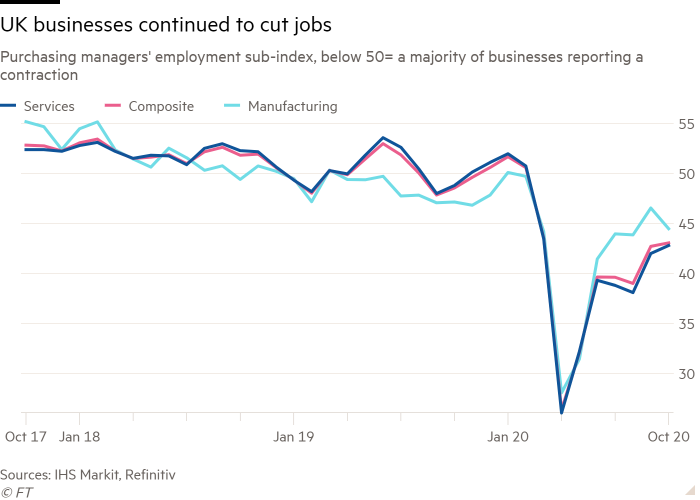 The index for the manufacturing sector also slowed more than expected to 53.3 in October, from 54.1 in the previous month, suggesting waning growth.

Growth in the sector slowed despite new export orders increasing at the fastest pace since February 2018, thanks to rising demand from China and the US and a temporary boost from Brexit stock building among clients in Europe.

Pent-up demand and rising residential property transactions also supported the sector, while shrinking demand from clients that have been hard-hit by the slump in travel and hospitality put the brakes on growth.

The composite index, an average of the two sectors, was down to 52.9 from 56.5 in September, the lowest in four months.

The estimates were based on data collected between October 12 and October 21 and they are usually published about one week before the final results.

The PMIs showed resilience in the UK economy compared with the eurozone, where the services PMI fell to 46.2, indicating widespread contractions. But the difference arguably reflects an earlier resurgence of infections in France and Spain than in the UK.

PMIs are the most recent and comprehensive indicator of economic activity for October and are monitored by policymakers to decide on further measures to support the economy as its fragile recovery is threatened by the virus and high Brexit uncertainties.

In the first half of the year, the UK economy contracted more than that of any other G7 country following longer-lasting curbs and a more severe health emergency.

Samuel Tombs, chief UK economist at consultancy Pantheon Macroeconomics said that “the recovery has lost its legs” with a “high risk of a relapse over the winter”. As a result, the Bank of England’s Monetary Policy Committee “will be under immense pressure to do more”, he added. “We expect it to announce at either its November or December meetings that it will purchase a further £50bn of gilts.”