The UK economy grew less than expected in August despite a boost from the hospitality sector, adding to pressure on policymakers to do more to support the economy.

UK gross domestic product increased by 2.1 per cent from July, but the expansion fell short of the 4.6 per cent consensus forecast of economists polled by Reuters.

The figures added to mounting fears over the economy, signalling that the bounceback is losing steam and that a full recovery — key for the survival of many jobs and businesses — remains a distant prospect.

Output in August remained 9.2 per cent below its pre-pandemic levels in February.

The unexpected slowdown in growth, reported by the Office for National Statistics, followed strong monthly expansions earlier in the summer.

James Smith, research director at the Resolution Foundation, a think tank, said the “disappointing” figures confirmed that Britain had never been on course for a rapid V-shaped recovery. “Much more effort over the summer should have gone into planning for a second wave [of coronavirus], rather than pinning hopes on a V,” he said.

The modest economic expansion was supported by the food and beverage service sector, where activity grew by almost 70 per cent thanks to the impact of easing lockdown restrictions and the government’s “eat out to help out” scheme for subsidised restaurant meals.

Combined, those two sectors contributed 1.25 percentage points to the 2.1 per cent growth.

“Today’s figures show our economy has grown for four consecutive months, but I know that many people are worried about the coming winter months,” said Rishi Sunak, chancellor.

Mr Sunak is preparing on Friday to set out details of a new local furlough scheme to support staff of businesses forced to close due to area-specific lockdowns, particularly in the north of England.

Overall, August’s output growth was slower than a revised 6.4 per cent expansion in July.

Economists warn that the slowdown is likely to prompt the government and the Bank of England to take more action to support the economy, particularly because the temporary boosts of subsidised meals and summer holidays have ended.

“The disappointing August growth adds to the evidence that the initial rebound in economic activity is running out of steam,” said Ruth Gregory, senior UK economist at Capital Economics. 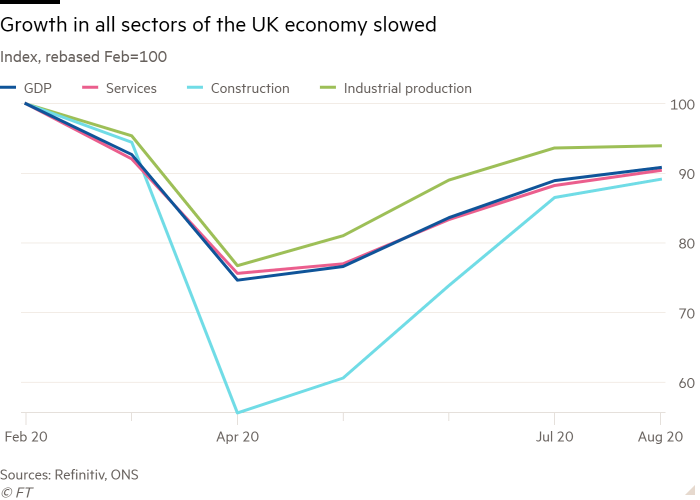 “With the government’s fiscal support unwinding, the next few months will almost certainly be worse. That’s why we think the Bank of England will yet expand QE by a further £250bn by the end of next year, with the next tranche of £100bn coming this November.”

The UK pound barely moved at $1.2939 after the figures were released early on Friday.

Suren Thiru, head of economics at the British Chambers of Commerce, a trade body, said: “The government must stand ready to help firms navigate a difficult winter, beyond the chancellor’s recent interventions.”

The services sector as a whole, which accounts for about 80 per cent of the economy, expanded at a monthly rate of 2.4 per cent in August, down from 5.9 in July. Output remained extremely depressed in many areas including entertainment and transport. 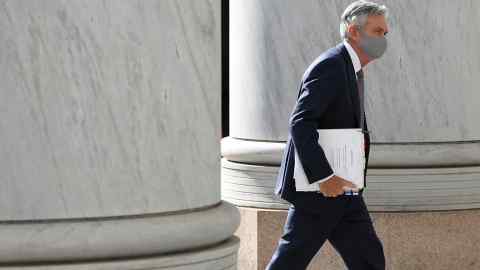 In the industrial sector growth nearly halted with the monthly rate slowing to 0.3 per cent from 5.3 per cent in July.

Construction recorded the strongest growth, rising 3 per cent as the housing market picked up, but the sector was rebounding from a larger fall than other industries and remained 10.8 per cent below pre-pandemic levels.

Before the resurgence in coronavirus infections and a rise in Brexit uncertainty, the Bank of England calculated that GDP was not projected to exceed its level in the final quarter of 2019 until the end of 2021.

The UK is one of only a few countries that calculate monthly GDP data, which is usually produced on a quarterly basis.

In the second quarter, the UK suffered the sharpest economic contraction of any G7 country.