UK businesses are slashing investment plans in the third quarter because of coronavirus, according to a Bank of England survey that highlights how the pandemic looks set to inflict long-term damage on the economy.

Average investment will fall by 32 per cent fall in the three months to the end of September compared with if there had not been a Covid-19 outbreak, the survey of 2,800 chief financial officers conducted between August 7 and August 21 found.

The food and accommodation sector estimated the biggest drop, at 60 per cent. But businesses in all sectors reported falling investment: retailers predicted a 40 per cent fall and manufacturers 32 per cent.

Despite the large uptake in government-backed loans, he said “many businesses are holding this debt unsustainably, and so it has not loosened manufacturers’ purse strings to sufficient degree to allow them to invest”.

Mr Brougham warned that, if the pandemic is prolonged, the lack of investment “will start eating further into UK industry’s global competitiveness and further jeopardise the prospect of an output-led recovery”.

The survey pointed to the contraction in capital expenditure being long-lasting, with average investment likely to be down by a quarter in the final three months of the year. The CFOs also said they expected investment to remain depressed into next year.

“The decision maker panel findings reinforce the concern that persistently weak business investment could hold back the UK’s recovery after an anticipated strong bounce back in the third quarter led by consumer spending,” said Howard Archer, chief economic adviser at the EY Item Club, a consultancy. 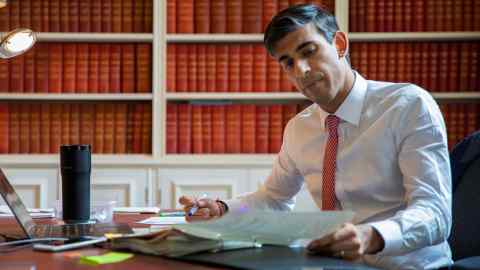 The findings echoed separate data published by the Office for National Statistics on Thursday showing that just under half of businesses reported turnover below what is normally expected in the two weeks to August 23.

While both surveys reported more workers were returning from furlough, businesses expected the impact on jobs to be more severe in the final quarter of the year, when the government’s job support scheme ends.

The gloomy economic picture was despite activity in the dominant services sector improving in August compared with the previous months, helped by government schemes to support spending, such as “eat out to help out”, and the gradual reopening of the economy.

Services activity, measured by the IHS Markit/Cips UK services purchasing managers’ index rose to 58.8 in August, up from 56.5 in July and in expansion territory, measured as being above 50, for the second month running. The reading, was the highest since April 2015.

However, the reading was well below the flash, or interim, estimate of 60.1, pointing to a weaker than expected expansion at the end of the month.