Britain and Japan will on Thursday attempt to thrash out a post-Brexit free trade agreement, although the UK admits a deal might only boost British GDP by 0.07 per cent and would be a bigger prize for Japanese exporters.

Liz Truss, UK trade secretary, and Toshimitsu Motegi, Japan’s foreign minister, will hold talks in London with the aim of wrapping up a trade deal that both sides have tried to rush through in a matter of months.

Among the sticking points are Tokyo’s demands for cuts in tariffs on Japanese car exports, while the UK is holding out for better access for services, including new rules on data regulation, and for agriculture.

Ms Truss will hail this as the first major trade deal signed by Britain since Brexit, although it will largely replicate the terms of the agreement between Japan and the EU that came into force in February 2019.

Japan has insisted in negotiations with London that any deal with Britain cannot be as ambitious as the one it signed with the EU, given that the UK is a much smaller market.

If Japan thought that the UK and EU were going to settle a new deal, it would not feel this urgent

Britain’s trade department estimated earlier this year that a “modelled” trade deal between the two sides “could increase UK GDP in the long run by 0.07 per cent”.

That compares with a Treasury estimate that Britain could lose around 5 per cent of potential GDP over 15 years under Boris Johnson’s plan to take Britain out of the EU single market and customs union.

The UK trade department has also estimated that while the trade deal could see a 21 per cent rise in UK exports of goods and services to Japan, imports from the country are estimated to increase by 79 per cent.

Nevertheless both see the deal as important, with Tokyo anxious to ensure continued privileged access to the UK market after Brexit, rather than trading on World Trade Organization terms.

It is the first overseas trip by a Japanese minister since the coronavirus took hold in March and the UK remains on Japan’s list of countries whose nationals are currently denied entry.

As a precaution, the Japanese team will spend the three-day visit in a self-imposed bubble, allowing themselves only to move between their hotel and the negotiation table, with no other meetings allowed.

Mr Motegi is arriving in the UK with what members of his team describe as “reasonable hope” that agreement on the outstanding issues can be struck by Friday.

Japan is approaching the talks with some urgency, with its disquiet focused on what will happen on January 1. “If Japan thought that the UK and EU were going to settle a new deal, it would not feel this urgent,” said one senior Japanese official.

Officials in Tokyo said Japan was not optimistic about the UK’s talks with Brussels and was working on the assumption that Boris Johnson’s government was unlikely either to extend the transition period with the EU beyond that date, or to finalise a deal with the bloc.

If Britain and the EU failed to secure a trade deal, it would leave Japanese companies based in the UK — including car companies — facing tariffs for imported parts from continental Europe.

If Ms Truss and Mr Motegi succeed in finalising a trade deal, it would at least allow Japanese companies in Britain to look to Japan as an alternative source of tariff-free components.

“There will be a few tweaks compared with the EU deal,” said David Henig, director of the UK Trade Policy Project. “It’s not going to be phenomenal, but at least both sides want to do it.” 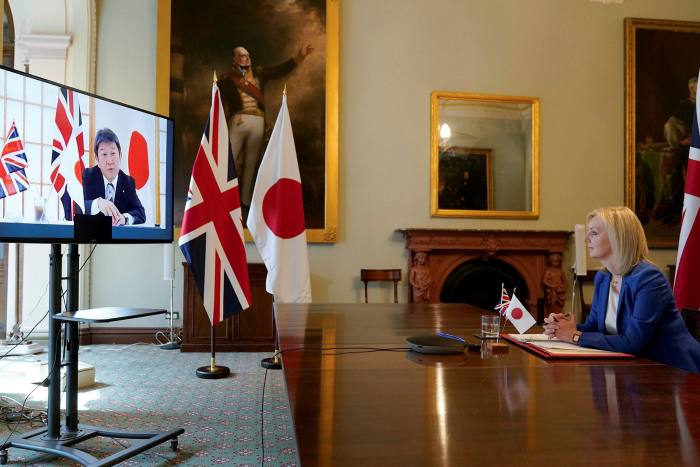 Japan’s eagerness to reach a deal with the UK is not only about trade; the visit by Mr Motegi provides a chance to discuss bilateral co-operation on security and defence, as Tokyo eyes the ever-increasing regional ambitions of China.

Japan has noted the UK’s stronger tone recently towards China on issues such as Hong Kong and Huawei and sees a trade deal as a way to strengthen ties.

“Every discussion about trade under (prime minister Shinzo) Abe has always had a strategic component,” said Tobias Harris, senior vice-president at Teneo, the corporate advisory firm.