Donald Trump’s unilateral effort to boost the US recovery through executive actions this month has failed to deliver significant amounts of money to households, darkening the fiscal picture for the world’s largest economy.

The president pledged on August 8 to deliver “immediate and vital relief” to struggling Americans after $600-a-week in emergency jobless benefits expired on July 31 and negotiations broke down with congressional Democrats on a stimulus deal. Acting on his own, Mr Trump said he would provide up to $400 a week in extra aid to unemployed Americans.

Two weeks later, Treasury department figures show that the executive actions are providing only a tiny fraction of the previous emergency aid, even though weekly jobless claims have again climbed above 1m, a level unprecedented in pre-pandemic US history.

“It has done very little to deliver support for the economy,” said Michael Feroli, a senior economist at JPMorgan Chase.

Mr Trump acted on his own even though Congress has the “power of the purse” under the US constitution. To circumvent the legislature, he said he would use $44bn in disaster relief funds to provide an additional $300 per week to unemployed workers, and up to $400 per week if states agreed to add $100 per week more.

The Treasury department’s daily operating cash statement shows that since Mr Trump’s announcement, only $324m in federal disaster funds have been used for unemployment payments. By contrast, the $600-a-week in emergency jobless benefits translated into about $15bn a week in aid.

The emergency assistance comes in addition to existing unemployment benefits, which vary by state, but are lower. The overall value of federal jobless benefits has fallen from $66.9bn between July 1 and July 20, to $35.6bn between August 1 and August 20.

“The $300m is a rounding error compared to what the previous programme was,” said Jay Shambaugh, an economics professor at George Washington University who has been tracking the numbers. “It’s just a massive hole.”

Wall Street analysts are warning that Mr Trump’s promise may prove politically counterproductive, entrenching positions in Congress while delaying prospects for a large-scale stimulus deal until at least next month.

“The executive orders have caused us to take a step back in terms of achieving a more fulsome, more robust fiscal stimulus package,” said Kristina Hooper, chief global market strategist at Invesco.

Alec Phillips, an economist at Goldman Sachs, wrote in a note to clients: “We still think Congress will pass fiscal stimulus legislation but the odds of near-term action have declined and uncertainty around the eventual policy outcome has increased. In the meantime, consumers will have less disposable income as a result of benefit expiration.”

The uncertainty over fiscal policy has emerged as one of the biggest clouds hanging over the US economy as it attempts, in fits and starts, to recover from the shock of the pandemic.

According to the US labour department, 12.9m fewer Americans were working in July than in February. A census bureau survey in late July found the number of US households that “often” or “sometimes” did not have enough to eat had grown from 22.5m to 29.3m during the pandemic, a trend that could accelerate with the drop in jobless benefits. 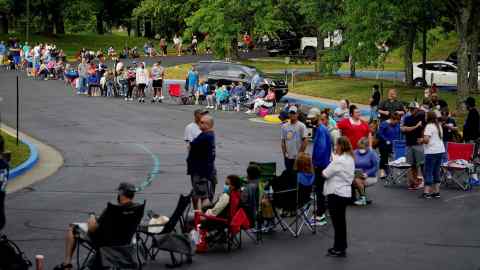 Michele Evermore, a senior policy analyst at the National Employment Law Project, said: “People are making the choice now for next month. It’s clear that money isn’t coming, so do we pay rent, do we buy medicine, do we buy food? Where can we cut in order to make this work?”

The unemployment disbursements under Mr Trump’s executive actions are likely to grow somewhat in the coming weeks, but that increase may not be substantial. Many states are wary of implementing the plan, amid concerns about the legality of the executive action, the complexity of setting up a new administrative system to deliver the benefits and their own financial troubles, which make it harder for them to share the burden.

The Federal Emergency Management Agency, which is administering the scheme to direct disaster relief money to the jobless, said that, as of Friday, 13 of 50 states had been approved to participate.

“Not only is it going to be tough for states to make this decision of whether or not they can do this, there’s also a chasm between the governor deciding that they can do it, and then actually doing it,” Ms Evermore said.

Difficulties are also developing for another key executive order by Mr Trump, allowing for a voluntary deferral in payroll taxes paid by employers and employees starting on September 1. These taxes are used to pay for social insurance programmes such as Social Security and Medicare.

The US business community has reacted negatively, raising the possibility that many employers may decline to participate. Among the concerns is that the deferral of taxes would create a big tax liability at the end of the holiday, which would be difficult to manage. “There remains widespread uncertainty on how businesses will implement and apply the executive order,” Neil Bradley, chief policy officer at the US Chamber of Commerce, said in a letter to Steven Mnuchin, the Treasury secretary. “As American employers, workers and families work to navigate the Covid-19 crisis they need clarity not more confusion.”

Mr Trump’s executive actions also directed federal agencies to explore ways to halt evictions and foreclosures, and allowed for a deferral of student loan payments. But housing and education experts say those actions will have little immediate impact.

Meanwhile, the Republican-controlled Senate has adjourned until September. The Democratic-controlled House of Representatives was due to return on Saturday for a vote to protect the US postal service from cuts that had been proposed by the Trump administration but were rolled back after a political firestorm.