Hello from Hong Kong, where everything has shut down again. New cases of coronavirus hit a record high on Thursday last week — though, at 67, the situation remains vastly different from that of the US and Europe. Bars have closed their doors while schools have opted for an early summer holiday, leading us on to our topic for the day: education.

Our policy watch looks at US secretary of state Mike Pompeo’s visit to London to discuss trade tensions with China, among other things, while our chart of the day focuses on Australian trade with China.

The pandemic problem for universities

Over the past two decades, education has quietly developed its own version of international trade, and China has played the starring role.

At the end of the last century, there were about 138,000 university students from China studying outside of its borders. By 2017, driven by the country’s expanding middle class, that number had leapt to 869,000, according to Unesco data.

Chinese demand for premium education exports has proven lucrative for universities in the UK and Australia, where a reliance on international student fees has gradually become baked into the higher education model.

Coronavirus, one of the primary effects of which is to restrict travel, is evidently disastrous for this arrangement. Teaching has moved online as the pandemic continues to rage, while the free movement between countries that underpins international study has been suspended for the foreseeable future.

But trade in education — like many other forms of trade — is also exposed to geopolitical tensions centred around China, which preceded the virus but are being exacerbated by the pressures it is exerting around the world.

In the UK in the last academic year ending in 2019, there were 86,485 first-year students from China — far more than from all of the EU combined, and a third of the total from overseas. At 13 higher education institutions, Chinese students make up more than a tenth of all students, according to a recent report by the UK’s National Institute of Economic and Social Research.

The sheer volume of demand has led to the emergence of a vast and little-discussed network of agents in China, who help source and place students at overseas universities.

Research published in June by Manchester university, based on interviews with those agents, suggested that coronavirus was proving a significant deterrent. Applicants and parents, the research noted, “expressed concerns to agents about whether the UK government was taking strong enough measures to contain the pandemic compared to the actions that were taken by the Chinese government”.

A street in Melbourne. The Chinese government warned students last month about studying in Australia, saying that the virus had not been effectively controlled © Daniel Pockett/AAP

A sense of unease about how the crisis was being handled overseas was also reflected in a statement from the Chinese government last month, which warned students about studying in Australia and said that the virus had not been effectively controlled.

Data released this week showed the Chinese economy returned to growth in the second quarter, over a period when new cases of the virus in China remained in the tens per day while infections skyrocketed in the west.

But the Chinese warning on Australia, which also pointed to “discrimination” against Asians in the country, directly followed an escalation in trade tensions between the two countries. China in May banned beef imports from four of the country’s abattoirs and placed tariffs on barley imports after Australia joined calls for an investigation into the origins of the pandemic.

The UK, which said its telecoms providers would not be able to buy new Huawei 5G equipment from the end of the year, is exposed to similar risks. Measures from the US which required international students to leave the country if their studies moved online, as Trade Secrets covered last week, demonstrate that the political threat to educational trade works in both directions.

In Australia, where 152,712 Chinese students were enrolled in higher education as of December 2018, and in the UK, the risk from a collapse in student flows is not necessarily to the wider economy, but to the financial stability of its universities.

On that front, a sharp decline in cross-border flows of students is still at its early stages. A recent UK government plan to help support and restructure the country’s universities suggested that student numbers next year would be particularly severely affected by Covid-19. But lockdown measures and constraints on educational settings could persist for much longer.

Fewer cases in China might limit overseas study in the short term, but rising tensions with countries such as the UK or Australia could be felt decades from now if the effects of recent tensions are reflected in parental choices.

“If you are now a Chinese parent with a five-year-old child, you might now be looking at things and thinking, actually I’m not going to send my kid to a bilingual school,” said Julian Fisher, senior partner at Venture Education, a Beijing-based education consultancy.

If they lose the high fees paid by Chinese students, universities will need to find another source of income to maintain their current levels of spending. They may turn to domestic students. That raises the question of whether governments, under intense fiscal pressure from all directions, will be willing to subsidise their study to the same extent that they did in the past.

Australia has been shielded from an even worse Covid-19 economic downturn by record demand for resources from China, despite the souring of diplomatic relations between Canberra and Beijing. Keith Pitt, Australia’s minister for resources, told the Financial Times that the mining and energy sectors were underpinning the domestic economy, which has been battered by a second wave of Covid-19 that has forced many businesses in Melbourne to shut again for several weeks. For example, 62 per cent of China’s iron ore imports came from Australia in 2019-20. 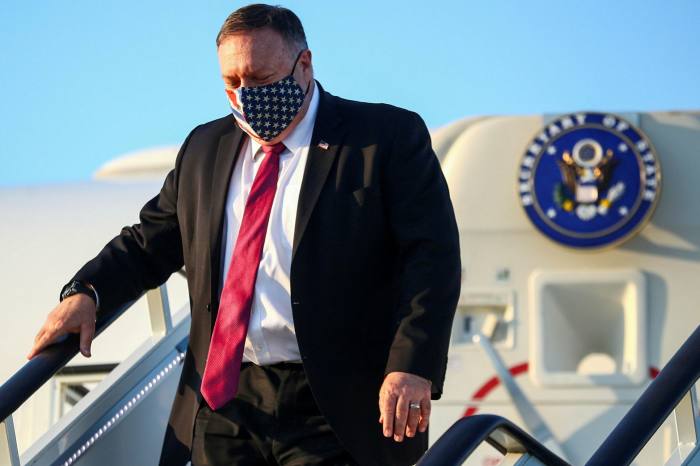 Mike Pompeo, the US secretary of state, has arrived in London for meetings with Boris Johnson, the UK prime minister, and other senior UK politicians as geopolitical tensions rise between western nations and China, writes Laura Hughes.

The Trump administration has taken an increasingly combative stance against China this year, with Pompeo previously indicating that the UK should choose whether to ally with Beijing or Washington.

Pompeo is expected to discuss the situation in Hong Kong, rising tensions with China and Johnson’s decision last week to instruct UK telecoms operators to remove Huawei technology from their 5G mobile networks by 2027. The decision on Huawei has been an early test of the UK government’s foreign policy, as it seeks to maintain a strong relationship with the US and forge a post-Brexit trade agreement.