Hello from Brussels. Sorry to talk about Brexit news: we generally try to administer it in moderation, as excessive consumption is strongly linked to feelings of exhaustion, listlessness and nausea. But we cannot help but record that, according to UK Prime Minister Boris Johnson, Thursday would be the last day he could come to an agreement with the EU, or that Britain would go away entirely and there would be no deal. SO THERE. The EU summit will certainly not make great concessions to Great Britain. So let's see what Johnson does in response.

Tall Tales is about how the economically insignificant but symbolically important topic in the Brexit talks, fishing, reveals a rather fact-free attitude on both sides. Even on a maritime topic, the main focus is on how the overhyping of the new ice-free Arctic shipping channels says something interesting about globalization. Our daily map shows China's medical exports.

With a slow boat from China to the EU

(It's from a song.) Even the destruction of the planet from global warming appears to have its downside, and the opening of new trade routes from the melting of the Arctic pack ice is one of them.

Trade Secrets' old sparring partner, conventional wisdom, assumes that the Arctic will become one of the new arenas of the geopolitical struggle for the great powers (mainly the US, Russia and China), marked by struggles for mineral wealth and strategic influence. The trading part of this is primarily the North Sea route that surrounds the Russian coast. The melting ice opens the passage and could potentially shorten the sea voyage from China to Europe by 10 days, allowing container ships to avoid the bottlenecks of the Strait of Malacca and the Suez Canal.

Beijing sees this as part of the Belt and Road initiative and intends to invest in transport and digital infrastructure to consolidate its position there. Of course the project got a cool name: the Polar Silk Road.

On closer inspection, like an admirable recent report from the Friends of Europe think tank, all of this seems a little exaggerated. It's not just that moving container ships across the Arctic seas is more unsafe, dangerous and polluting than many companies can believe. Interestingly, the development of globalization makes fast, single-stop long distance trade routes less relevant.

Certainly there are profits in the Arctic, especially for Russia, in the exploitation and transport of new mineral resources. However, it's a bit difficult to believe that opening up the ice-free passage will make a huge difference to container shipping. For their part, large western companies have already ruled out using the route for the foreseeable future, citing environmental concerns (the “soot emissions” from ships have an effect on the snow quality and thus on the atmosphere). Maersk, the world's largest shipping company, conducted a test run on a container ship in 2018 but said it was neither environmentally nor economically sustainable. With vicious polar storms and the high seas, there is also a reputational risk from safety: it is a very long way from search and rescue if something goes wrong.

Chinese company Cosco has few such concerns and plans to take advantage of the route. While it is shorter than the Strait of Malacca and the Suez Canal, it also requires expensive icebreakers and ice-class ships and is subject to delays. If China will use the route, the Friends of Europe report said, it will mainly serve as a diversification measure to reduce the risk of relying on other sea routes rather than to cut costs.

What does this have to do with changing globalization? One of the reasons China doesn't make a lot of money from the Arctic route is that trading in container goods these days isn't just a poor country making things and shipping them far to a rich country. It's more complex than a comparative advantage and container full of toys.

As low-income countries (including China itself) in Asia become middle-income countries and middle-income countries get rich, they will become destinations for consumer goods rather than just a place to pick up cheap commodities. Container ships from China not only chug to Rotterdam without stopping. They do a lot of short-haul deals and drop off and pick up semi-finished and finished goods all over Asia, especially at hubs like Singapore.

China's “labor cost arbitrage” model, which is about the price of making basic products, has long run out of place. Chinese incomes have risen and exports are becoming more demanding and time-sensitive. Companies are increasingly using air freight or the small but growing rail transport to reach European markets.

As colleagues from the Financial Times have described, container shipping survived the pandemic surprisingly well. In relative terms, however, there is a secular shift from trans-Pacific and Asia-European traffic to intra-regional routes, with the giant container ships that traditionally dominated long-distance trade being replaced by smaller and more nimble ships. The problem with the Arctic route is not just that the crossing is dangerous, the timing is uncertain and the shipping emissions are an environmental disaster. There is no interesting place to stop on the way.

There is no doubt that more ships will plow through the Arctic waters on the North Sea route than today. However, it is unlikely that this will be a pivotal moment for global freight transport. The way of trading has changed too much for that.

The pandemic and fiscal stimulus to economies around the world have had a positive impact on China's exports, which have benefited from demand for home and consumer electronics products. The numbers earlier this week showed that exports from China grew the fastest this year. However, demand for medical supplies is not quite as strong as it was after a peak in June, suggesting an element of domestic stockpiling. 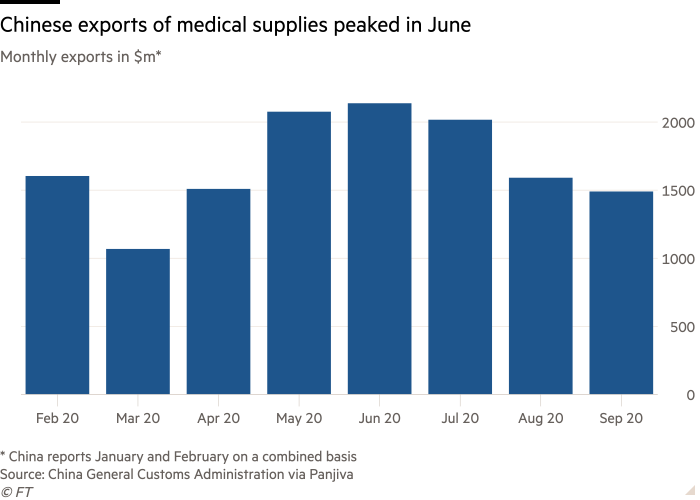 Harrods department store is almost certainly worth more to the UK economy than the entire fishing and fish farming industry. © Mikecphoto / Dreamstime.

One of our favorite calculations over the past few years was our renowned FT colleague Chris Giles' estimate that Harrods was almost certainly worth more to the UK economy than the entire fishing and fish farming industry. Letting Brexit founders speak on the rocks of fishing rights would be like having a leg amputated because you have an itchy toe. And yet we are here. Issues of real economic importance to the UK's service economy, such as legal and accounting qualifications, have been generally ignored while negotiators argue over herring quotas.

Both sides need to get a grip on something here. Britain lost in misty fantasies of being a proud island nation. . . something . . . our brave trawler boys. . . something . . . the Radio Four shipping forecast. . . something . . . Need to understand that while the British will land a lot of seafood, they will sell most of it to the EU and will get by without a market without a trade deal. The EU sea fishing nations, France in particular, should likely recognize that a larger island nation with the EU's longest coast is leaving the Common Fisheries Policy and less fish are likely to move around. It's sure to be a real haddock for negotiators.