The author is Chief Economist at the Institute of International Finance

Amid the recent troubles in the Turkish economy, there is one factor that investors sometimes overlook: the country’s formidable export engine.

In the run-up to the pandemic, Turkey’s export volume of goods and services rose by 24 percent between 2016 and 2019, well above the export performance of most other emerging countries. Along with a young and entrepreneurial population, this suggests that Turkey could benefit more from a post-Covid-19 world than almost any other emerging market.

What Turkey needs to do now is to be on the right track and send a political signal that it plans to raise interest rates. It is the right time to take such a step. There’s a lot of goodwill in the markets – investors see the appointment of an economic team led by a new finance minister as a potential fresh start. The lira has gained more than 10 percent this week. President Recep Tayyip Erdogan has also promised to create a better environment for local and international investors.

It is needed. The Turkish lira has depreciated for many years. We estimate that since 2013, adjusted for inflation, it has fallen by around 40 percent in real terms.

Other emerging market currencies have also fallen – for example, the Brazilian real fell 31 percent in real terms over the same period. The majority of these write-offs, however, affected the commodity exporters. For them, the currency weakness largely acted as an economic compensation for the falling demand for raw materials. As US dollar commodity prices fall, the impact will be mitigated when export earnings are converted back to a lower local currency.

In contrast, Turkey is a raw material and energy importer, and the decline in the lira is mainly due to domestic political developments and unorthodox actions.

The country is too dependent on credit-driven booms as the main growth driver. In recent years there has been regular loan expansion, starting in 2017 with a significant incentive from the state loan guarantee fund, which guarantees loans to small and medium-sized businesses. There was also an expansion in lending to state banks in 2019 and a very large credit boom in early 2020 at the height of the Covid-19 shock.

There are good reasons for this focus to use credit as an incentive. Compared to other emerging countries, Turkey’s outstanding credit level is not an outlier as a percentage of gross domestic product, so there is room for additional credit. And the credit expansion earlier this year was at odds with the economic devastation caused by Covid-19, as other countries gave unprecedented momentum. 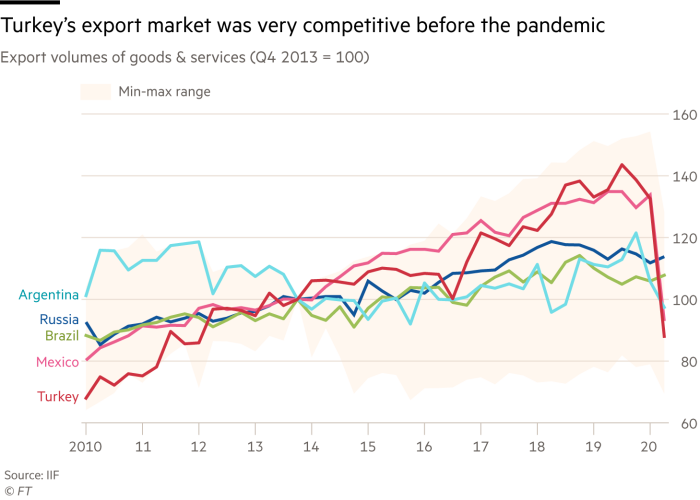 However, loans for Turkey have adverse side effects. By boosting domestic demand, imports are boosted, which in turn increases the current account deficit. This dynamic has prevailed this year. While the country had a current account surplus of 1.2 percent of GDP in 2019, we expect this year’s credit boost will bring the current account back into a deficit of more than 4 percent.

This deterioration – coupled with large portfolio outflows due to heightened investor concerns around the world – has resulted in significant official currency reserve losses in 2020 that are greater than those of other emerging markets. These reserve losses are a sign that relying on credit incentives to fuel growth is unsustainable.

In the short term, rate hikes would send a strong signal and make market sentiment more positive. This would be in line with the experience of 2018, when such increases played a crucial role in stabilizing the lira. In the medium term, a return to structural reforms and monetary policy orthodoxy would offer a more sustainable growth path. Markets will likely reward this with loose financial terms – a stronger lira and lower interest rates.

As the US election uncertainty diminishes, market sentiment is shifting in a favorable direction for emerging markets as global risk appetite rebounded. News of a possible Covid-19 vaccine could further boost this trend.

In other words, there is tailwind that could stabilize and strengthen the lira with a minimum of political effort. Additional help will come from the fact that we believe the lira is undervalued at this point. Thursday’s exchange rate of TL 7.71 to the dollar is above our fair value estimate of 7.50.

Currency valuation is an inaccurate deal, but the lira’s rally and outperformance against other emerging markets this week is certainly a sign of undervaluation.

Ugras Ulku, an economist at the IIF, contributed to this article