Good morning from London where economic growth faltered in August even before the September surge of infections, prompting the UK government to tighten restrictions and take further action to limit spiking job losses just when it was planning to withdraw its support.

It’s difficult to imagine any reason for optimism writing from the UK, a country that in addition to new economic hardship faces the additional rising risk of a no-deal Brexit. However, globally there are green shoots on global trade that are leading to upward revisions of export and import growth for this year, and that will be the focus of our main piece. Our Policy Watch looks at potential fresh trade tensions between China and Australia, while our chart of the day examines the IMF forecasts for global growth.

‘Reason for optimism on the trade front’

Back in April, the World Trade Organization was very gloomy. It expected global trade to plunge this year more than twice as much as it did during the financial crisis in 2009. But by this month, its tone had changed.

“There is reason for optimism on the trade front with a smaller than expected decline,” said Robert Koopman, WTO chief economist, when he presented the new twice-yearly forecast last week. “Asian exports have been strong”, he added.

The brighter outlook for this year largely reflects an unexpected rebound in the summer. Global trade rose 8 per cent and 5 per cent respectively in June and July compared with the previous month, according to the CPB World Trade Monitor.

That’s partially thanks to comprehensive monetary and fiscal policies that have supported incomes around the world and allowed imports to rebound once the initial lockdowns were lifted.

Moreover, the pandemic boosted trade of health-related goods, with personal protective equipment recording explosive 92 per cent annual growth in the second quarter. Almost half of the PPE exports originated in China, according to the WTO.

Over the same period, trade of pharmaceutical products rose at a double-digit rate. Trade of information technology products and services also received a boost as the pandemic forced a big shift toward greater digitalisation.

In April, the WTO forecast merchandise trade would plummet up to 32 per cent in 2020, much higher than the 12 per cent plunge during the financial crisis in 2009. Even in an optimistic scenario, with a recovery from the autumn of this year, global exports had been expected to contract 13 per cent.

But in the WTO’s latest October’s forecast, global merchandise trade is set to shrink “only” 9.2 per cent, largely owing to this unexpected and rapid recovery over the summer.

The milder contraction in global trade contrasts with an unprecedented fall in world output. As a result, the volume of world merchandise trade is only expected to decline about twice as much as global gross domestic product, rather than six times as much during the 2009 collapse.

This suggests that export-led economies could rebound quicker than previously thought, while those with large client-facing non-traded services, such as hospitality — the hardest-hit sectors — face a bumpier recovery.

“Exports to Asia, where the pandemic seems to be under control and the economic recovery is in decent shape, is fuelling a big chunk of the global recovery,” said Erik F Nielsen, global head of research at UniCredit.

Forecasts for China — compiled by Consensus Economics, a company that aggregates leading private economic projections — were revised up in September to a total of $2.4tn this year, $232bn more than it forecast in June and almost approaching pre-pandemic expectations.

Forecasts are even more optimistic for Chinese exports next year. The value of the upward revision is by far the largest for China, but since June exports forecasts have been revised up for 22 out of 29 countries tracked by Consensus Economics.

However, it’s easy to spot the risks for a fresh deterioration in trade flows. The new tightening of restrictions, particularly in Europe and North America, could mean a sharp weakening in global demand, including for Asian products, limiting growth in the area and hampering global trade expansion.

Issues beyond the pandemic are also a threat to global trade. Import tariffs remain high after being increased over the past two years, the WTO’s appellate body has ceased functioning while waiting for a new head and trade disputes are spreading to the technology sector.

Yi Xiaozhun, deputy director-general at the WTO, warned that “a descent into protectionism” in the aftermath of the pandemic would be among “the greatest risks for the global economy”.

Releasing medium-term forecasts for the first time since the Covid-19 crisis, the IMF said today that there would be significant scars in terms of job losses, bankruptcies and entire sectors of the economy being left unviable after the crisis, which would persist because the adjustment from struggling sectors, such as travel, to expanding ones, such as digital, inevitably was slow and painful for many people. 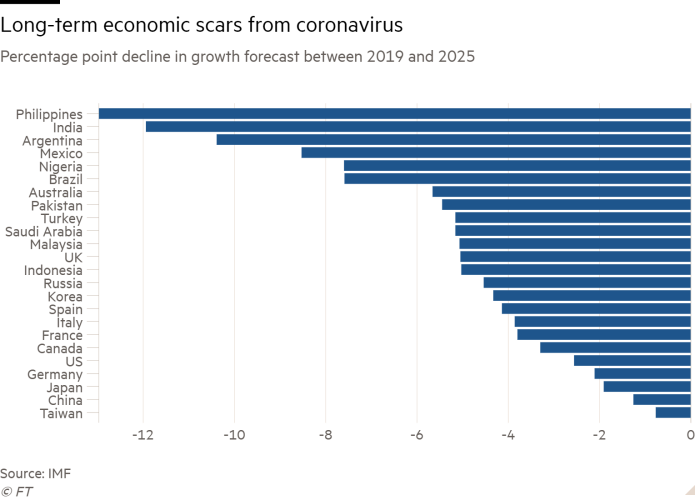 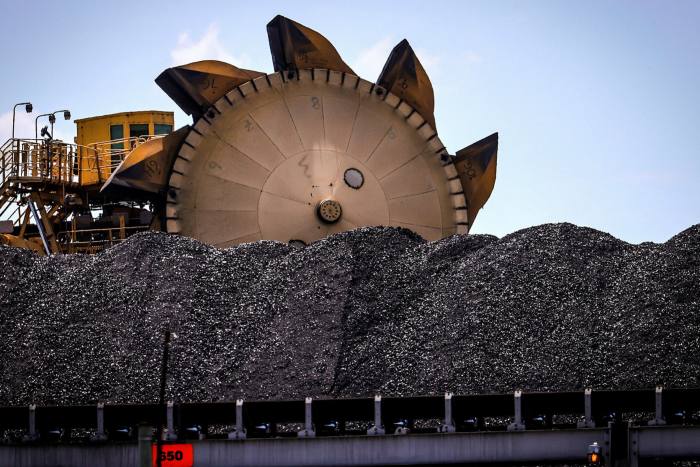 Beijing has reportedly issued a verbal communication to state-owned energy companies and steel mills to immediately stop importing Australian coal — a potentially crushing blow to the country’s coal export industry, which is worth A$55bn ($39bn) a year. News of a proposed coal ban was first reported by S&P Global Platts and Argus Media.

But analysts cautioned that the unconfirmed reports of a coal ban might reflect efforts by China to prop up its own domestic coal industry rather than a deepening political dispute with Australia. China has already imposed sanctions on barley, beef and wine imports following a sharp deterioration in diplomatic relations linked to Canberra’s call for an inquiry into the origins of the Covid-19 pandemic in Wuhan.

Simon Birmingham, Australia’s trade minister, said the government had received no official notification from Beijing regarding an order to stop buying Australian coal. “We don’t have any evidence to verify those reports,” he told Australian radio on Tuesday. “I have seen the reports and we have certainly been in touch with the Australian industry, and we have also been working to seek a response from Chinese authorities in relation to the accusations that have been made publicly.”