The boost brought about by the pandemic in the digital, automation and technology industries will exacerbate gender inequality in the workplace as most of the newly created jobs are taken over by men.

The pandemic is leading to a shift in the use of technology by companies, as both official statistics and company surveys show, and makes the automation and digitization industry one of the few winners of this year’s economic turbulence.

According to an FT analysis of official data, nearly 800,000 additional jobs in computer programming and related services have been created so far this year in the EU, US, UK, Japan and Australia. In some countries, the number of other technical occupations in areas such as information technology and telecommunications also increased, with men being over-represented in both sectors.

This is in stark contrast to the overall labor market – unemployment has risen in most of the major industrialized countries in recent months. The most affected areas of work are low-paying jobs in service sectors that are predominantly women.

In the 34 OECD countries, women are more likely to have temporary contracts, and in all Member States for which data are available, women are more represented in low-paid occupations.

“The pandemic could help widen the gender gap, including the digital gender gap and the gender pay gap,” said Mariagrazia Squicciarini, director of science technology at the OECD.

Most jobs, for which demand has accelerated since the first pandemic, require skills that fewer women have acquired through training, such as IT, science and technology.

Shauna Olney, Head of Gender, Equality and Diversity at the International Labor Organization, warned that a growing number of countries are seeing renewed spikes in coronavirus cases and “women continue to bear the brunt of the crisis.”

“For many women, Covid-19 threatens their work and livelihood,” she said. “Immediate and effective action is essential to reduce the risk of deterioration in working conditions and career prospects.”

I: The total number of jobs decreased by 2.9 percent in the second quarter compared to the same period last year. Employment in computer programming, consulting, and related services increased 18 percent.

US: Computer system design jobs and related activities decreased in October compared to the same month last year. However, the decline was less than a third of the decline in total employment.

Australia: Employment in the three months to August decreased 3 percent, but the number of people employed in computer systems design and related services increased 11 percent.

UNITED KINGDOM: The number of professionals in information technology and telecommunications rose by a record in the twelve months to June, significantly outperforming the entire labor market.

The ILO has urged governments to target hard-hit sectors and professions where women are overrepresented, to collect gender statistics to inform recovery plans, and to design recovery packages that recognize unpaid care work.

Trudy Norris-Gray, chairwoman of Wise, a UK campaign for greater diversity in science, technology and medicine, said technology job advertisements have increased due to “the intensification of technological change during this pandemic [that] changes not only the way we work, shop, communicate and educate, but also the way we analyze our behavior and are therefore informed. ”

But she said “more men are filling these new jobs than women” and to change that, “we all need companies to accelerate the pursuit of gender balance, especially in technology.” . . as it is central to our entire life “and is one of the sectors with the” greatest employment growth “.

… while jobs in some service sectors are shrinking

UNITED KINGDOM: In the year through June there were 120,000 fewer sales assistant jobs than in the same period last year, the largest decrease ever recorded.

Japan: The number of jobs in the areas of accommodation, food and drinks fell by 10.6 percent annually in September. This was the greatest value since records began until the pandemic.

I: In retail and housing almost 1.5 million jobs were lost in the second quarter compared to the same period last year, the largest in its history.

US: Accommodation and meals employment declined 18 percent in October compared to the same month last year, the largest annual decline in October since records began in 1990.

Australia: The number of jobs in the areas of accommodation and meals fell by 15 percent in the third quarter compared to the same period last year. This was the largest decrease in its history during this period. 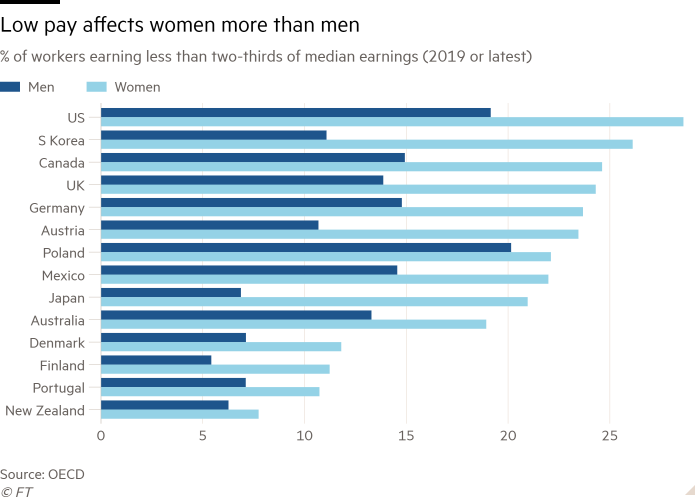 Jennifer Howard-Grenville, a professor at the University of Cambridge, said that technicians goods and services as “algorithms are not neutral and reflect the unconscious assumptions of their developers”.

However, Ms. Squicciarini noted that in care-related, clinical and diagnostic support professions where women make up a significant proportion of the workforce, there has also been an increase in the demand for workers.

Claudia Hupkau, assistant professor of economics at CUNEF (Madrid) and a fellow at the London School of Economics’ Center for Economic Performance, said the great success for women-dominated sectors has been mitigated by the fact that women are “over-represented in sectors considered critical were defined on the Covid-19 response as the health care “.