New lockdowns announced across Europe in the past few days to curb the recurrence of the coronavirus pandemic have sparked a series of downgrades to economic growth forecasts as activity restrictions threaten the continent’s recovery.

According to economists polled by the Financial Times, the eurozone economy is expected to shrink 2.3 percent in the fourth quarter of this year and cut production by around € 68 billion – a worse performance than predicted before the restrictions were announced.

The bloc bounced back from its coronavirus-induced recession in the three months to September and posted record quarterly gross domestic product growth of 12.7 percent, figures released on Friday showed, but production was still well below pre-pandemic levels .

The data and the numerous new restrictions announced in France, Germany and other countries in the past few days have led economists to update their forecasts. An FT survey of 18 economists from leading banks and institutions found that all but one expected the eurozone economy to contract again in the final quarter. Most had previously forecast positive growth.

Later this week, the Bank of England is expected to forecast that the UK’s growth recovery was weaker than expected in August, that production will barely grow at best in the fourth quarter, and that economic scars will last deeper and longer than hoped. A second national lockdown for England was announced on Saturday that would require all hospitality and non-essential retail stores to be closed for a minimum of four weeks from Thursday.

Christian Keller, Chief Economist at Barclays, said: “Although the outlook for manufacturing has held up relatively well. . . The downturn in the much larger service sector of the economy, which is directly affected by the new restrictions, is likely to push the euro area economy back into negative growth. “

Infection rates across Europe continue to rise, according to data released on Sunday by the European Center for Disease Prevention and Control.

In France, which began its second national lockdown on Friday, the number of cases rose from 706 to 742; in the UK the rate rose from 438 to 460; and in Germany – where a partial lockdown will be imposed from Monday – the number rose from 182 to 206.

Despite the surge in cases, the new measures are less stringent than those imposed in the spring, while businesses are better equipped to deal with the disruption, meaning economists expect the new economic decline to be milder than when it was first locked . Economic output in the euro zone fell by 15 percent in the first half of 2020.

Katharina Utermöhl, an economist at Allianz, said that companies had “gained experience in dealing with strict blocking restrictions”.

Additionally, “activity in some sectors has still not returned to pre-crisis levels and just cannot fall that far this time around,” said Andrew Kenningham, an economist at Capital Economics.

In France, small businesses are complaining that the block will favor large chain stores, hypermarkets and online retailers like Amazon. 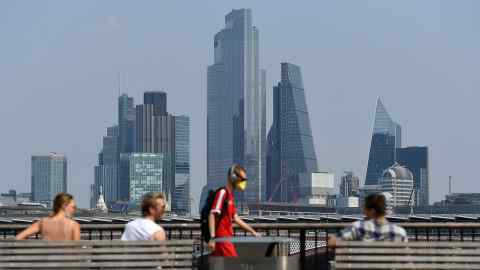 French Finance Minister Bruno Le Maire said last week he expected economic activity to decline 15 percent during the new lockdown – half of the 30 percent he saw in the spring lockdown weeks.

Gilles Moec, chief economist at Axa, predicted that the French lockdown would lead to a quarterly decline in national GDP of 7.4 percent by mid-December “with a moderate easing in the run-up to Christmas”.

Lena Komileva, Chief Economist at G + Economics, said: “Measures may prove to be slower during the long winter flu season, even if Christmas travel and retail activity increases sharply but for a short time.”

The risk of future lockdowns would also affect consumer behavior, said Carsten Brzeski, economist at ING: “There will be more precautionary savings simply because more people believe that there could be more lockouts in the next year, even if things are open again.”

In the first three months of next year, he forecast GDP growth in the euro zone of just 0.7 percent compared to the previous quarter.

Additional reporting by Michael Peel in Brussels, Joe Miller in Frankfurt and Leila Abboud in Paris