The EU will support Ngozi Okonjo-Iweala as the next Director General of the World Trade Organization and thus strengthen the Nigerian's top status.

Ambassadors from the 27 EU member states confirmed on Monday that the bloc will throw its weight behind Ms. Okonjo-Iweala following discussions between EU leaders during their summit in Brussels last week.

Ms. Okonjo-Iweala, a former finance minister, is running against South Korean Trade Minister Yoo Myung-hee in the final round of the WTO election. The winner is expected to be announced early next month.

An EU official said the decision to support Ms. Okonjo-Iweala, who will be the first WTO chief from Africa, is "a strong signal to strengthen the multilateral order" as well as "a clear signal on and a sign of Africa mutual trust "".

Political decision-makers, including Valdis Dombrovskis, EU Trade Commissioner, Peter Altmaier, German Economics Minister, and Charles Michel, EU Council President, have tried to develop a common EU position for the final voting round. The EU itself had decided not to put up its own candidate.

An EU diplomat said that Ms. Okonjo-Iweala had received support from France, Germany, Spain, Italy and the Netherlands, among others, during the internal deliberations. Ms. Yoo found significant support from EU governments in Central and Eastern Europe, including the Baltic states.

A person briefed on Monday of the discussions among ambassadors said Latvia and Hungary – the last two countries where Ms. Yoo is preferred – had agreed to change majority at a special meeting called at 6 p.m.

The EU decision leaves Ms. Yoo facing an uphill battle. Japan and China are expected to veto them de facto due to political tensions with Seoul. 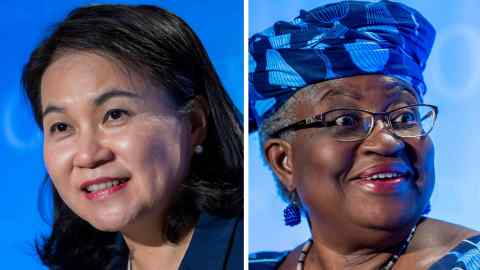 The new Director General must be chosen by consensus from among more than 160 WTO member governments. The role became available due to the unexpected early resignation of Roberto Azevêdo, a Brazilian who had held the job since 2013. He resigned in September.

The new boss will take power at a time when the WTO's ability to promote rules-based trade has been undermined by loopholes in its rulebook. These have been exposed by China's model of capitalism and by President Donald Trump's propensity to take unilateral action to tackle perceived abuse of US corporations.

The new director general will also take office at a crucial time, when the international community is either adjusting to a new US administration or preparing for another four years from Mr. Trump.