Tesla’s claims about its Autopilot driver-assist feature are misleading, a German court has ruled.

The use of the word “autopilot”, along with other marketing material, suggested the vehicle could drive on its own, the court said.

But the technology still requires the driver to remain alert at all times.

Tesla has been banned from repeating the misleading claims. German law does not allow fully autonomous driving.

Under the heading “by the end of the year”, Tesla added its cars would be able to recognise traffic lights and automatically stop and start driving in urban areas. 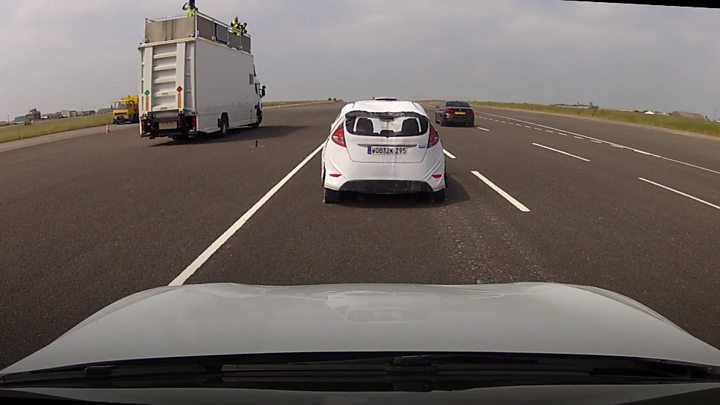 Media captionThis car is on Autopilot. What happens next?

The court, in Munich, said: “By using the term ‘autopilot’ and other wording, the defendant suggests that their vehicles are technically able to drive completely autonomously.”

In 2018, two US consumer groups also complained about the “deceptive and misleading” naming of the Autopilot feature.

Tesla’s strong position in the electric-vehicle market has made it a challenger to German carmakers.

And it has chosen Berlin as the site of its first major European factory.

Responding to a tweet pointing out pilots do not stop working when a plane’s autopilot mode is on, chief executive Elon Musk tweeted: “Tesla Autopilot was literally named after the term used in aviation.

“Also, what about ‘autobahn’?” he added, referencing the German word for motorway.

“Auto” is a German word for car, similar to the English word “automobile”.

Last week, Mr Musk said completely autonomous driving was “very close” and Tesla would crack the technology by the end of this year – a claim one analyst called “typically bold”.

There have been several examples of drivers misusing the Autopilot system in dangerous circumstances.

A British driver was disqualified from driving for 18 months after turning the system on and climbing into the passenger seat, on the motorway.

Earlier this year, investigators said another Tesla driver, who died in a crash, in March 2018, had been playing a video game when his Autopilot-enabled car had hit a concrete barrier.

They also warned more crashes could happen if Tesla did not change the system.

And in another case, an Autopilot-mode Tesla crashed into a stationary police car.