Hello from Washington, where we’re in the midst of a week of relatively juicy congressional hearings.

Yesterday saw US attorney-general William Barr aggressively defend his record at the helm of an increasingly politicised Department of Justice before the Democrat-controlled House judiciary committee.

Today sees the heads of Amazon, Apple, Alphabet and Facebook appear together before Congress to receive a grilling on the market power of Big Tech. Trade lovers will not be left out, though — the senate finance committee, headed by Republican senator Chuck Grassley, also plans to convene today to discuss reforming the World Trade Organization.

Our main piece looks at the latest episode in the Airbus-Boeing dispute, in which Europe has moved to try to avert a full-blown trade war before a seemingly unimpressed US trade representative. Our person in the news is Michel Barnier, the EU’s chief Brexit negotiator, while our chart of the day highlights how Poland’s huge coal industry is regarded as one of the biggest obstacles to Brussels’ climate change plans.

“It’s tricky”, said US trade representative Robert Lighthizer recently when talking about the mammoth Boeing-Airbus dispute that lies at the heart of much transatlantic trade tension at the moment.

Washington was last year awarded the right to impose punitive levies of up to 100 per cent on $7.5bn of European goods — the result of a WTO ruling that the EU and four of its member states (France, Germany, Spain and the UK) had failed to get rid of illegal state support for Airbus aircraft. The US has pushed up those levies in stages, targeting all sorts of European goods, with the next deadline falling in August. The WTO has ruled that US company Boeing has also collected billions in unlawful assistance, and a note outlining the retaliatory action the EU can take is expected in September.

The latest instalment in the 16-year multi-episode epic came last Friday. In vague terms, Airbus claimed that it no longer took the government handouts at the heart of the state-aid dispute. Specifically, it said it had agreed with the governments of France and Spain to “amend” repayable launch aid loans — which help manufacturers develop new models — on the A350 wide-bodied jet. Airbus did not disclose further details, but people close to the company said the amendment was that it would pay higher rates of interest. It had already done this with Germany, the people said, and the UK loan had been paid back.

The EU made much of this move. Trade commissioner Phil Hogan, whose long US-EU to-do list includes fixing this dispute, called for de-escalation of tensions with Washington. Others were less impressed. The EU’s former ambassador to the US David O’Sullivan brutally subtweeted Airbus’s European public affairs official to dub the move “WTO compliance for slow learners”. 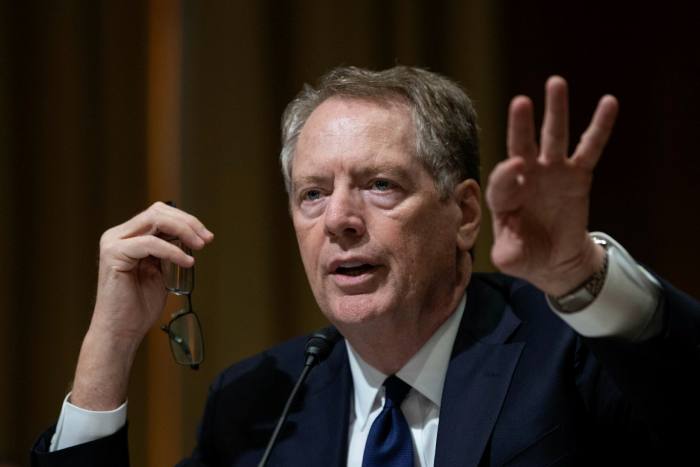 Robert Lighthizer said last month that not only would the EU have to stop subsidising Airbus, but appeared to suggest the group should pay back some of the subsidy © Nicholas Kamm/AFP

“It’s not like we haven’t been telling them to do this for many, many years!,” he tweeted elsewhere. So far there has been stony silence from USTR in response to the Airbus olive branch. A spokesperson told Trade Secrets on Monday that USTR has read the press reports concerning Airbus’s announcement, but hasn’t been contacted directly by any of the countries concerned.

EU officials and diplomats have long said that Washington has rebuffed attempts to reach an agreement on how each country can support its aerospace champions. For its part, the US claims that its state aid problem with Boeing has been fixed. In May, the US said it had notified the WTO that it was now fully in compliance with its rules after repealing tax breaks for Boeing in Washington State.

Moreover, Lighthizer said as recently as last month that not only would the EU have to promise to stop subsidising Airbus, but appeared to suggest that Airbus should pay back some of the subsidy. Speaking at a Chatham House event online, he described the “massive subsidy” as giving “a very significant unfair advantage for Airbus and against a US company,” adding: “It’s going to require commitments not to do it again but also paying back some element of the subsidy.”

Bill Reinsch of Washington think-tank the Center for Strategic and International Studies said that ending the subsidies “is not, in the US view, big enough, as it does nothing to compensate for years of subsidies that created Airbus and kept it afloat”. He added that the US also expected the Boeing ruling to authorise a much smaller retaliatory action, something the EU disagrees will be the case.

“Until that comes out, I don’t think the US has any incentive to negotiate, aside from political pressure from US importers of items subject to the retaliatory tariffs, which so far has not moved them,” said Reinsch.

Viewed from Brussels, where the European Commission wants to make climate change the centre piece of its agenda for the next five years, Poland’s huge coal industry is one of the biggest obstacles. Leaving aside Germany, Poland now generates as much energy from coal as the rest of the EU nations combined.
Read more Michel Barnier: ‘By its current refusal to commit to conditions of open and fair competition . . .  the UK makes a trade agreement, at this point, unlikely’ © John Thys/Reuters

Barnier rounded off the fifth batch of trade talks between the EU and UK last Thursday by warning there had been no progress on two “essential topics” — how to ensure a “level playing field” between EU and UK businesses, as well as on the vexed question of access to British fishing waters.

He welcomed progress in some areas, but warned: “By its current refusal to commit to conditions of open and fair competition and to a balanced agreement on fisheries, the UK makes a trade agreement, at this point, unlikely.”