Two teenage boys hired e-scooters and rode them along a busy dual carriageway, police have said.

The equipment is being trialled in the Tees Valley area and can only be used on cycle lanes and roads with a speed limit of up to 40mph.

Cleveland Police said they stopped two teenagers who hired the scooters and rode them along the A19 to Teesside Park on Thursday.

Police have not said how old they were or whether they had driver’s licences.

Ginger, the firm running the trial, has been asked how the system will prevent those not permitted to use it from hiring the vehicles, but has not commented.

A force spokeswoman said neither boy was wearing any protective equipment, such as helmets or high visibility clothing, as recommended by government guidelines.

Temporary Superintendent Graham Milne, said: “Hiring e-scooters may seem like a bit of fun for some, but they’re not toys.” 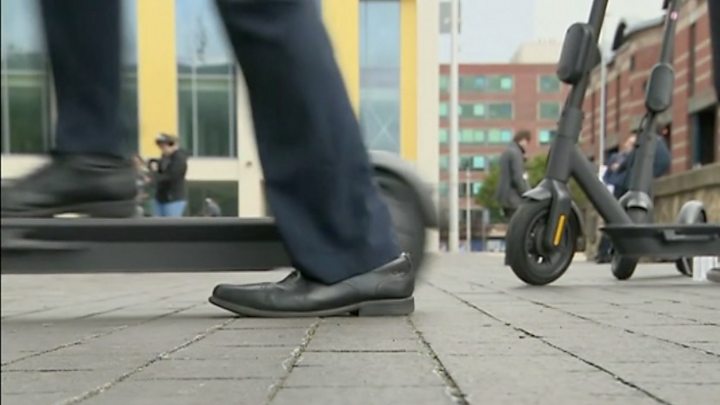 According to guidelines, the 11.5mph e-scooters can be ridden on any road apart from the motorway.

But a Cleveland Police spokeswoman said they were not permitted on roads with a speed limit above 40mph.

To be able to hire an e-scooter, a rider must have either a provisional or full driving licence.

Tees Valley mayor Ben Houchen, who has been championing the pilot, said the riders’ actions were “illegal” and a “flagrant breach of the rules”, describing the pair as “idiots”.

He said more than 500 rides had taken place since the trial started on Monday, the “overwhelming majority of which have been without incident”.