US stocks closed lower for a third straight day as technology shares slipped, capping off another choppy week on Wall Street that included some unsettling central bank meetings.

The S&P 500 fell 1.1 per cent, extending losses that first began on Wednesday following the Federal Reserve’s meeting on monetary policy. For the week, the benchmark index was down 0.7 per cent — its third week of declines. Meanwhile, the tech-heavy Nasdaq Composite closed down 1.1 per cent.

“Stocks remain technically overbought in the short term and vulnerable to a further correction,” said analysts at BCA Research. Investors should pivot into cheaper areas of the stock market, such as financials, non-US stocks and value stocks, they added.

Earlier this week the Fed chairman Jay Powell provided fresh details on the US central bank’s plan to allow for inflation to run above its 2 per cent target in order to make up for periods of undershooting it.

But while Mr Powell affirmed the Fed’s commitment to keeping interest rates low for the foreseeable future, investors were left guessing to what extent it would put its balance sheet to use to bolster the nascent economic recovery. This bred scepticism about the US central bank’s ability to really stoke inflation.

“The market is currently saying we are not convinced, and it puts the ball back in the Fed’s court,” said Padhraic Garvey, global head of debt and rates strategy at ING. Investors are “struggling with the notion that talking about inflation doesn’t generate inflation”.

Mr Garvey also expressed concern about the lack of progress on the fiscal front. Democrats and Republicans remain at an impasse over the scope and scale of a new relief package for Americans hardest-hit by the coronavirus outbreak. Hopes for a deal ahead of the US presidential election in November have dimmed.

European equities ended the day lower, with the Stoxx 600 and London’s FTSE 100 both off 0.7 per cent and Italy’s FTSE MIB down 1.1 per cent.

Financials fared particularly badly, with the Stoxx 600 banks index accelerating losses and falling to its lowest level since May. Investors were spooked after the Bank of England on Thursday said it was examining how a negative interest rate “could be implemented effectively”, as well as by renewed concerns about lockdowns and the heightened risk of a no-deal Brexit.

The BoE’s announcement “is a clear signal that the (monetary policy committee) intends to use this tool”, said Brian Hilliard, chief UK economist at Société Générale.

Mr Hilliard said the UK central bank could deploy negative rates in early 2021 “in reaction to the shock following the move to trading under (World Trade Organization) rules after the failure . . . for the trade talks with the EU”.

Data released on Friday showed UK retail sales rose 0.8 per cent in August on a monthly basis, slightly beating analysts’ expectations. In July sales overtook their pre-pandemic level to be up year on year, a trend that continued into August with a 2.8 per cent annual increase.

“Retail sales plausibly will remain above last year’s average in the remaining months of this year, as Covid-19 appears to have triggered a rotation away from spending on services towards goods,” said Samuel Tombs, chief UK economist at Pantheon Macroeconomics.

But households would save more of their incomes than they did last year, he said, meaning “a sustained V-shaped recovery in households’ spending is out of reach”.

The pound lost some ground against the dollar, falling 0.4 per cent to $1.2917 after a choppy session on Thursday.

China’s currency was on track for its best week in 10 months as the country’s economic prospects have brightened and investors shift into its domestic bond market. 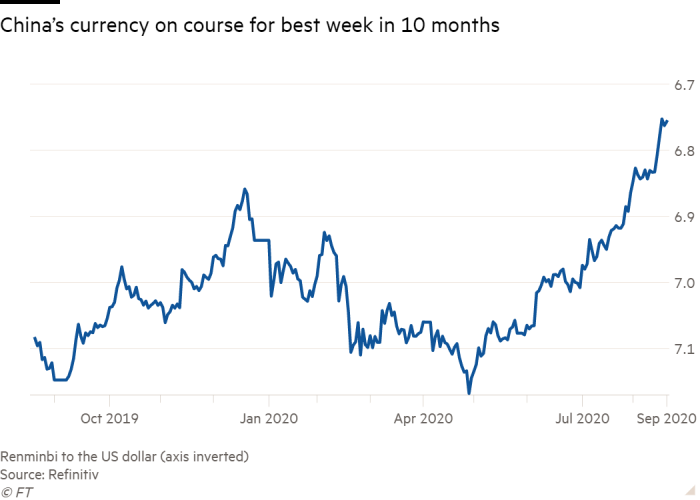 The onshore-traded renminbi firmed roughly 0.1 per cent to Rmb6.7692 to the dollar on Friday, taking the currency’s gains to about 1.2 per cent this week and putting it on course for its biggest weekly rise since November 2019.

China’s currency has rallied in recent months as export growth and investor appetite for onshore debt have sent flows of dollars into the country. The rise in the renminbi, which has come during a period of weakness for the greenback, means the currency is heading for its best quarter on record.

“With China on course for a more pronounced recovery than elsewhere, its external position the strongest in a decade, and onshore yields unusually attractive by global standards, there is still room for further gains,” wrote Julian Evans-Pritchard, a China economist at Capital Economics.

Copper prices rose to their highest levels in two years because of strong demand in China, the world’s largest consumer of the metal. Copper rose to a high of $6,850 a tonne, the highest level since June 2018, before falling back to $6,781 on the London Metal Exchange.