Hello from Wellington and Seoul. As US-China tension shifts to the perhaps unlikely focus of TikTok — a China-made app most popular with dancing teenagers and their embarrassing parents — questions over the long-term impact from technology and trade decoupling have been front of mind for Trade Secrets. Where will countries’ threats to ban each other’s technology and limit trade interdependence take us?

For answers, our main piece returns to the bitter dispute between Tokyo and Seoul. While the problems stem from atrocities inflicted by Japan in the first half of the 20th century, a trade battle over technology last year has already sparked a reduction in South Korea’s reliance on one of its closest neighbours. It is a subtle but lasting change. Our chart of the day looks at falling Chinese investment in Indian tech while our Policy Watch focuses on what leading World Trade Organization director-general candidates told Alan Beattie in today’s Financial Times.

Fluorinated polyimide. Photoresists. Hydrogen fluoride etching gas. More than just a mouthful to say, the sourcing of these three products have come to symbolise an emerging rupture in the global technology supply chain and a long-term dislocation between Japan and South Korea — two linchpins in the US security architecture in Asia.

If you are not familiar with the background of this decades-long dispute: South Korean courts in 2018 allowed claims against Japanese companies over wartime slavery, drawing the ire of Shinzo Abe’s government. Tokyo’s subsequent threat in 2019 to cut off Seoul from critical inputs to things such as computer chips and smartphone displays set off months of diplomatic brinkmanship which only de-escalated after desperate intervention from Washington.

We are still watching for the potential for tensions to again flare, either via underlying legal claims or at the WTO.

However, a bit of digging into the South Korean technology industry by our Seoul bureau has revealed that the country is quietly making good on a promise last year to wean its technology companies off their reliance on Japanese inputs.

Which brings us back to fluorinated polyimide, photoresists and hydrogen fluoride etching gas. Japan has for years been a dominant supplier of these materials to groups such as Samsung, SK Hynix and LG — companies that dominate a decent chunk of the world’s production of electronic components and devices.

The Japanese groups that make these materials are known for both their reliability and quality and few in the industry expect to see them completely replaced in the near-term. But when it comes to reverse engineering or developing new technologies to battle rivals, South Korea has a long record of success — think cars, ships, smartphones and computer chips.

A customer tries out a Samsung smartphone in Seoul. Like other South Korean electronic groups, Samsung has for years relied on Japan for key materials used in its products © SeongJoon Cho/Bloomberg

And exactly one year on from when Seoul announced a $6.5bn five-year plan to boost domestic production to reduce its heavy reliance on Japan for scores of key products, “substantial progress in localising key parts and materials” has been made, according to Che Kyung-hee, a manager at the commerce ministry.

“We can’t produce everything in the global supply chain — our priority is to secure stability in supply of key parts and materials by diversifying sources,” Che told Trade Secrets.

While industry experts concede that beating Japanese suppliers on pricing, quality and secure supply remains years away, one of South Korea’s biggest computer chip manufacturers said that the shift was under way.

“We have already slightly reduced the portion of Japanese parts and materials used in our manufacturing process . . . Since our local partners have only just begun to develop their own technologies and to produce their own parts and materials, we need more time to test their quality,” said a person at the company who requested anonymity.

SK Materials said the company began supplying hydrogen fluoride gas — used in developing high-end computer chips — to local chipmakers in June, and was aiming for local suppliers to meet 70 per cent of demand as soon as 2023.

Similar gains are being made in products for electronic displays. Kim Young-woo, an analyst at SK Securities, expected South Korean suppliers’ prices to “gradually” decline as they scaled up production, adding that there was “no financing problem” given the state backing and pressure on the companies to act patriotically.

What is the upshot of this unexpected decoupling of the Japanese and South Korean economies? Outside of the obvious market inefficiencies such as oversupply and unnecessary duplication, some experts believe that this trend, which is gathering pace globally, has dangerous security ramifications.

The tech cold war has come to India: political tensions are jeopardising the position that China’s tech groups have rapidly built up in India’s booming start-up scene and have opened the door for US tech companies and funds to take on their Chinese rivals, including Facebook, Google and Amazon. As China stumbles, Silicon Valley has smelled blood. 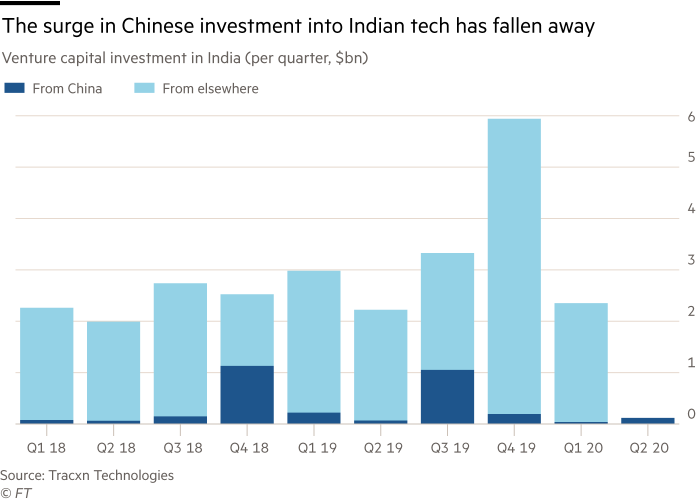 The two leading candidates to run the WTO have called for reform to address US criticisms that have paralysed the institution’s highest legal body and risk undermining the entire organisation, writes Alan Beattie.

Kenya’s Amina Mohamed and Nigeria’s Ngozi Okonjo-Iweala are the favourites to be appointed WTO director-general after incumbent Roberto Azevêdo steps down in September. In interviews with the FT, both said that US criticisms of judicial over-reach by the organisation’s dispute settlement system were valid.

The US has frozen the WTO’s appellate body, its upper legal tier, by refusing to appoint new judges in protest after the body repeatedly ruled against American restrictions on low-priced imports. Asked by the FT whether the US criticisms were fair, Mohamed, a former diplomat and trade minister, said: “Yes, I think that the US concerns are real.” She added: “The feeling in Geneva among very many members is that they (the appellate body) went outside the mandate that was granted to them.”

Okonjo-Iweala, a former Nigerian finance minister who now chairs Gavi, an international alliance to develop and deliver vaccines, said of the US criticisms: “I think most people agree that they have a point — that there may have been instances where the appellate body may have acted beyond the covered agreements that members reached.”

Their comments come as the contest to succeed Azevêdo in theory approaches the halfway point. Nominations closed in July and the process of whittling down the list of eight nominees begins in September.