Tax increases of £60bn or a return to austerity will be needed to restore the UK’s public finances to stability after coronavirus, the fiscal watchdog said on Tuesday, predicting government borrowing will reach £370bn this year.

Describing the long-term public finances as “clearly . . . on an unsustainable path”, the Office for Budget Responsibility said that a combination of borrowing to address the consequences of Covid-19 and the government’s decision to limit immigration after Brexit would increase the necessity for tax increases.

In its central scenario, it calculated that the country now needed to raise 50 per cent more from tax increases each decade to keep public debt stable as a share of national income than would have been required before the pandemic, assuming the prime minister keeps his promise of not imposing austerity measures. There was now a need for £60bn of tax rises per decade to stabilise the public finances, it said.

“Given the structural fiscal damage implied by our central and downside scenarios, and its implications for long-term sustainability, in almost any conceivable world there would be a need at some point to raise tax revenues and/or reduce spending to put the public finances on a sustainable path,” the OBR said.

In its Fiscal Sustainability Report, the watchdog started its analysis with an updated account of the likely level of public borrowing this year, which was hindered by chancellor Rishi Sunak refusing to share details of £50bn of extra borrowing in his summer statement with the watchdog before the report’s publication.

Without the chance to include Mr Sunak’s additional borrowing in its main forecasts, the OBR estimated in a back-of-the-envelope exercise that government borrowing this year was likely to exceed £370bn and be in the range 15 to 23 per cent of gross domestic product, close to the annual level of borrowing in the second world war.

Uncertainty over the economic outlook was rife, the watchdog said. It chose to include three scenarios for its analyses based on different speeds of recovery and three guesses of longer-term economic scars from higher unemployment, bankruptcies and continued social distancing after the crisis.

In these scenarios, gross domestic product would drop between 10 and 14 per cent this year before rebounding between 5 and 15 per cent in 2021.

Unemployment would rise to at least 10 per cent in all three scenarios after the furlough scheme closes, significantly worse than in the 2008-09 recession and back to 1980s levels of 13 per cent in the pessimistic scenario, the OBR said. 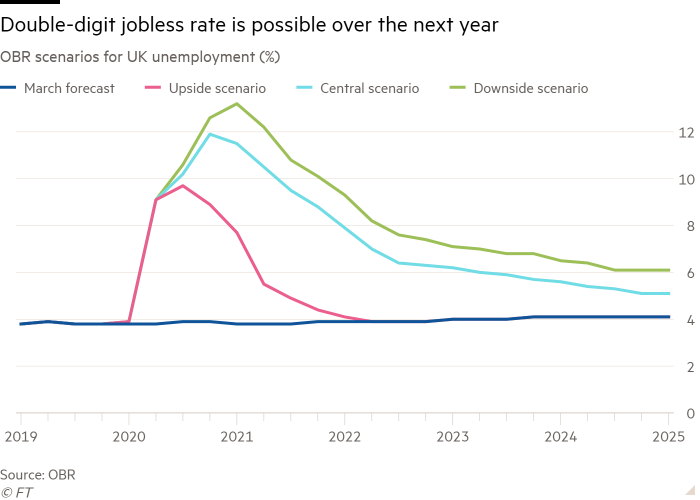 The OBR calculated the outlook for the public finances on the basis that in the medium term, the economic growth rate would return to the annual 1.5 per cent level it forecast in the March Budget for all three scenarios, but with different levels of persistent scars from the crisis. There would be no damage in the upside scenario, while there would be scars of 3 per cent and 6 per cent of GDP in the central and downside scenarios respectively.

But the improvement in output and borrowing would not be sufficient to stop underlying public debt rising persistently as a share of GDP.

This, the fiscal watchdog forecast, would rise from just over 100 per cent of GDP in 2020-21 to 111 per cent by 2030 and then explode to 150 per cent by 2040 as population ageing and accumulated debt put even greater pressure on the public finances.

“In practice, no government could allow net debt to persist for long on these explosive paths, as it would find it hard to finance its mounting deficits,” said Robert Chote, the OBR chair. In the near term, the OBR highlighted the difficulty the government faced over the triple lock on pensions, which guarantees that state pensions will rise by the highest of CPI inflation, average earnings or 2.5 per cent.

This year, with inflation and earnings growth artificially low, the 2.5 per cent uplift will kick in at a cost of £6bn, the OBR said, raising the possibility that the government will suspend the lock for two years until the economy stabilises.

It added that state pension costs would be £3.2bn higher than if the pension was just increased by earnings alone, and £1.8bn more than under a double lock based on just inflation and earnings.

The OBR is prevented by law from commenting on government policies, but suggested that the chancellor would want to take the sharp deterioration in the forecasts for public debt into account when he sets new fiscal rules in the autumn Budget.

The ability of the government to borrow cheaply rests on investors believing they would not see the value of their investments “deliberately eroded” by higher inflation in the future and that required higher taxes or lower public spending, the OBR said.

This presented some financing risk in future and with the Bank of England buying up a further £300bn of debt, it meant that financing the UK government debt was even more sensitive to official levels of interest rates than it was previously.

“This and future governments will face a huge challenge in judging when and how public spending and tax policy levers should be pulled to place the public finances on a sustainable path,” the OBR concluded.