Chancellor Rishi Sunak downplayed the effects of a no-trade Brexit before virtual EU-UK talks resumed this week to try to reach a final deal.

Mr Sunak declined to say what modeling the Treasury Department had done for the economic impact of an exit from the EU without a trade deal when the UK’s transition period ended on Jan. 1, suggesting that the impact would be mostly short-term.

While the Chancellor said it was difficult to pinpoint the negative short-term impact – even on sensitive sectors like the automotive industry – he said the economic impact of Covid-19 would dwarf them.

Some government officials believe that Mr Sunak fully expects an agreement to be reached and that his comments should remind EU negotiators that the UK was ready to back off the talks. The Chancellor said Britain would “not accept a deal at any price”.

But David Gauke, a former finance minister, said “history will not judge kindly,” cabinet members who did not warn of the grave economic damage a hard Brexit without a trade deal would cause.

“The more ambitious among them know that it is a career-damaging move to be associated with a compromise on Brexit,” wrote Gauke on the ConservativeHome website. “They keep their heads down and are content with others challenging the prejudices of the more extreme supporters of their party.”

Mr Sunak told the BBC’s Andrew Marr program on Sunday: “In the short term and most immediately, it would be preferable to have a deal because it would make things easier in the short term.”

But he added, “I think the main impact on our economy next year is not going to come from that. It’s because of coronavirus. I am very confident about the UK economy in all circumstances and I am thinking about the longer term. “

However, Anton Spisak, a former British official working on Brexit, tweeted, “The costs will be * most visible * in January. However, the * biggest * costs will be incurred in the medium / long term: supply chains shifted; Customer operations have been relocated; Investments canceled. “ 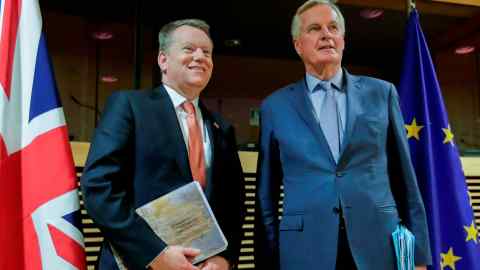 Michel Barnier, the EU’s chief negotiator for Brexit, remains in self-isolation along with senior members of his team after one of the leading EU officials involved in the talks tested positive for Covid-19 last week.

EU officials said discussions would continue in virtual form this week and UK officials hoped face-to-face talks could resume later this week. Both sides remain confident that an agreement can be reached, but negotiations are likely to drag on for the next week and possibly December.

An EU diplomat noted that Brussels had already encountered procedural complications due to the sluggish talks: The EU institutions already had too little time to translate an agreement into all 24 official languages ​​of the bloc before a vote on the ratification of the European Parliament Week of December 14 – the last scheduled meeting of the Assembly of the year.

The diplomat said workarounds were being investigated and MPs have already indicated they are ready to hold a vote towards the end of the year to gain more time for discussion.