As European countries race to reintroduce restrictions to beat back a new rise in coronavirus infections, a semantic skirmish of sorts has erupted. In the UK there is an allergy to the word “lockdown”, at least about anything to be applied nationally; the talk now is of a “circuit-breaker” if things get worse. And when Prime Minister Boris Johnson addressed the country on Tuesday, the message was that the restrictions he announced were not precursors to a lockdown but measures designed to avoid a lockdown.

A more enlightening semantic contribution comes from Devi Sridhar, the public health expert who has advised the Scottish government on the pandemic. As she says in a tweet, a “narrative of lockdown v. no lockdown (is) not helpful” because public health-driven restrictions are a matter of degree and “how much they affect the economy (and) daily life” rather than a binary issue.

True enough. What is binary, however, is the distinction between a strategy of maximum repression (or elimination) and one of mitigation. This choice has to be made, and much goes wrong for a government that puts off making it.

The two strategies require not just very different policies, but very different mindsets about the policies. Repression is the aim of getting virus prevalence to an absolute minimum, ideally zero but at least small enough that any uptick is easily nipped in the bud. That requires a willingness to go “all out”. Mitigation is the aim of letting the infection spread through the population but at a pace that keeps hospitalisations just within the capacity of the health system to cope. That requires a sort of fine-tuning, letting infection rates rise to the highest manageable level and then keeping them there. In economic jargon, we can think of this as the difference between maximisation (or rather minimisation) and optimisation, or between a “corner solution” and an “interior solution”.

To be clear, maximum repression need not mean full-on lockdowns. Repression is the strategy; lockdowns, or rather a full range of possible restrictions on interaction, are the tools to pursue it. The prevalence of the virus, the speed of its spread and the ability to trace it quickly all matter for how restrictive a strategy of repression must be. It does involve cracking down fast and hard, but that can be achieved with less force the earlier one starts and the better the test and tracing system in place.

The two types of strategies also call for very different types of communication. Repression requires a public call to arms, motivating a collective effort to support every restriction it takes to beat the virus. Mitigation requires — well, it is not quite clear what it requires in terms of communication. That is because the sort of Goldilocks conduct it calls for is hard to set out very sharply, and must either be vague or constantly fine-tuned. That means mitigation starts on a communicative back foot: it is likely to be interpreted differently by different people, or leave people confused, both of which may reduce the public’s willingness to comply. Communicatively speaking, mitigation works best if people do not ask too many questions and share a reasonably common understanding of what is required.

For all these reasons, prevaricating between two strategies is the worst possible outcome. That, unfortunately, is what the UK seems to have done. Before the spring lockdown, all the talk was of “squashing the sombrero” and “herd immunity”, which make sense if the strategy is mitigation but not if it is suppression. (Johnson’s image of squashing the sombrero refers to the flatter, wider curve mitigation achieves relative to doing nothing; suppression would rather look like slicing the sombrero in two, left of the middle. Herd immunity is the hoped-for outcome in mitigation, where the virus eventually fizzles out when it struggles to find previously uninfected individuals.)

Then the UK imposed some of the most draconian restrictions in Europe, much tougher ones than the Nordic countries that went for suppression from the start. This week Johnson used the word “suppress”, but the government refrains from vocally committing itself to this strategy with all its implications, let alone to the even tougher restrictions it entails given the rapid rise of infections. The impression remains of a government that hesitates rather than embraces the quick and hard (but therefore short-lasting) measures that suppression requires.

Yet it is not alone. Very few countries — hardly any European ones but Finland comes the closest — had the stomach to stick consistently to the suppression strategy. New Zealand is one of the few — and the reward is clear. It has just lifted all restrictions except on international travel and on some activities in the biggest city, Auckland. Elsewhere, political opposition has slackened commitment to suppression or made governments veer towards mitigation.

You need to choose and then make the best of the strategy you choose. Half-hearted suppression makes no sense; you pay the price without securing the prize. As for mitigation, restricting too much or too little defeats the purpose of the balancing act as you either lose control of the infection or lose the economic savings from accepting more deaths. This seems to have happened to Sweden, which has not performed significantly better economically than its Nordic peers despite many times more deaths as the chart below shows. 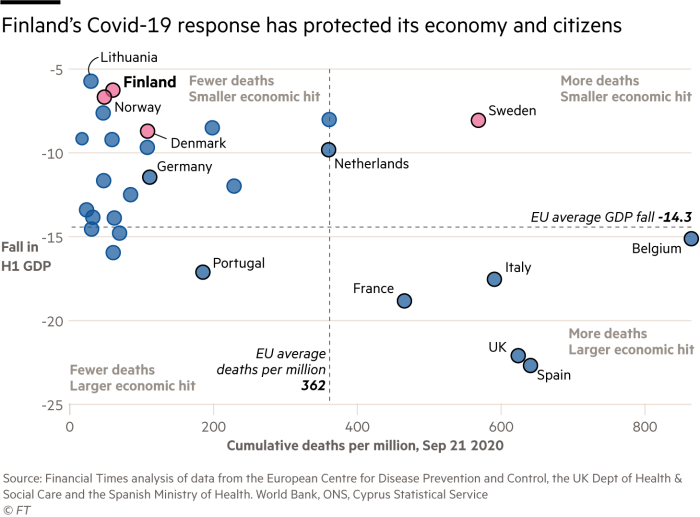 All these considerations seem to me to give a committed suppression strategy the clear advantage. Do it early, do it often, and you can get away with short, punctuated periods of semi-lockdowns — where if you start from a low prevalence you can afford not to shut down the most essential activities such as schools, and beat back the spread within a few weeks. The one big cost is that international travel must be controlled for extended periods to avoid imported cases — but, again, a high-capacity testing regime can minimise the need for quarantines.

What would be the argument for mitigation instead? It requires laser-sharp focus combined with artfully ambiguous communication to succeed. That, in itself, is a tall order. But even if this is realistic, it looks hard to justify the much higher death and morbidity toll it would entail compared with a well-run repression strategy, whose economic costs could be limited to short, punctuated “lockdowns” — short enough that they could be compensated and avoid the bigger economic collapses we saw in the spring. The exception would be if an effective vaccine was imminent, so that the mitigation strategy would not need to run its full, lethal course. But that seems a very lopsided gamble indeed. 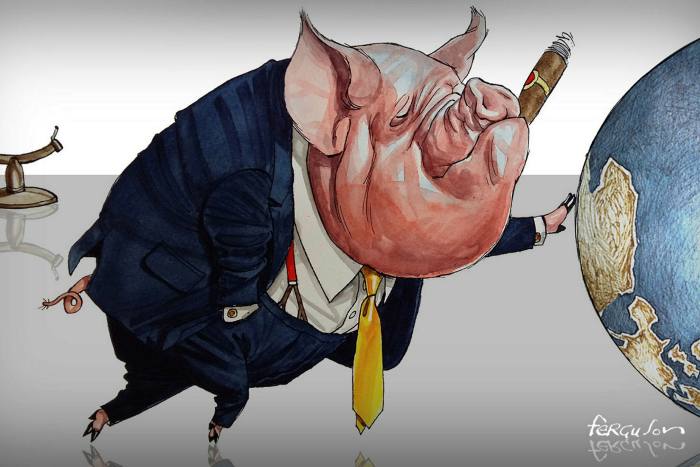