The production limits, in place to limit environmental damage from rare earth mines and maintain high prices, are forcing Chinese manufacturers who rely on rare earths for a range of industrial applications to turn to overseas suppliers, spurring imports from the United States and America Myanmar triggers.

"Production quotas hurt us financially," a senior executive at the High-Tech Co of the China Northern Rare Earth Group, the country's largest producer, told the Financial Times. “It has also resulted in an unstable supply of resources that could put (Chinese) end users under stress.

One of the greatest lessons to be learned from China's economic reform is that government planning does more harm than good. Rare earths are no exception

"We cannot achieve economies of scale if we cannot produce freely," added the CNREG manager. He said his group's profit margins are now lower than those of their overseas competitors, despite having a monopoly on certain rare earth elements.

The executives interviewed by the FT requested not to be named because of the sensitivity of the topic.

On Thursday, the Chinese Communist Party's Central Committee, which is holding its annual plenary session in Beijing, will approve the framework of the country's next five-year plan from 2021 to 2025. The committee, composed of the party's 200 top officials, is expected to give priority to self-sufficiency in strategic sectors such as rare earths and semiconductors.

China's hawks in the Trump administration want to deny Chinese companies access to leading technologies that are critical to semiconductor manufacturing and reduce the outside world's reliance on Chinese rare earths. Rare earth elements are a group of 17 minerals used in the manufacture of electronic products, electric vehicles and wind turbines.

"One of the greatest lessons for China's economic reform is that government planning does more harm than good," the CNREG executive said. "Rare earths are no exception." The Ministry of Industry and Information Technology, which sets China's rare earth production quota, did not respond to a request for comment.

Last year, China accounted for more than 60 percent of the world's rare earth production. The USA was the second largest producer in the world with 12 percent.

When the trade talks between China and the US were on the verge of collapse in May 2019, Chinese President Xi Jinping toured southern Jiangxi Province, a large manufacturing area for the country's rare earth industry. Analysts said Mr. Xi's visit should remind the US of China's stranglehold on the sector.

According to official information, the volume of Chinese rare earth imports increased by 74 percent in the first half of this year compared to the same period last year. The rise in imports is likely to continue as the Chinese consumer of rare earths from smelting factories to magnet manufacturers, races for orders from overseas suppliers.

"Our days of self-sufficiency with rare earths are over," said Du Shuaibing, an analyst at Baiinfo, a raw materials consultancy in Beijing.

The supply crisis was exacerbated by the rapid recovery of the Chinese economy from the Covid-19 pandemic. An official from Minmetals Rare Earth Co, another industry leader, said rising production by Chinese electric vehicle manufacturers, whose production rose 32 percent year over year in the third quarter, contributed to a surge in domestic demand for rare earths.

However, Beijing only increased its nationwide mining quota this year by 6 percent to 140,000 tons – a record amount, but it is still far from sufficient to meet demand. China's rare earth consumption has consistently outperformed domestic production by more than 30 percent over the past six years, and analysts predict the gap will widen this year. 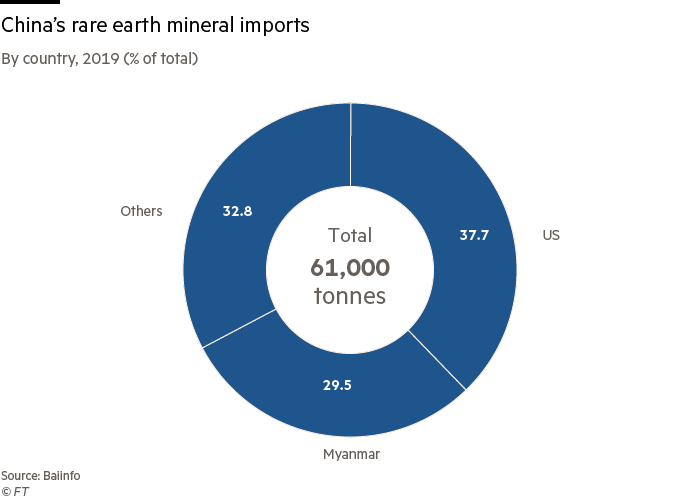 China began setting production quotas for rare earths in 2007 to prevent too much mining from damaging the environment. The government also wanted to keep prices high for local producers.

A chamber of commerce in Baotou, an industrial center in Inner Mongolia, whose companies make heavy use of the minerals, said in a report last year that the capacity of the local magnet factories was less than 50 percent partly due to the shortage of rare earths.

"There is great uncertainty in acquiring rare earth minerals from the US and Myanmar," said a second executive at CNREG, citing Beijing's strained relations with Washington and local protests, often sparked by industrial projects related to China in Myanmar. "We cannot take either of them for granted."

Chinese mining executives argue Beijing should abandon the production quota system and let market forces determine how much rare earths they should produce, provided environmental standards are met. CNREG has asked the Chinese government to first cut quotas for certain rare earth elements that the country has in abundance, such as lanthanum and cerium.

Energy is the world's indispensable business and Energy Source is its newsletter. Every Tuesday and Thursday, Energy Source brings you important news, predictive analysis and inside information straight to your inbox. Sign in here.