More than a million Spanish workers lost their jobs in the second quarter of this year, as the impact of coronavirus-related lockdowns weighed on the country’s economy.

The drop in employed workers was the biggest on record, exceeding the number of people who fell out of work at the height of the financial crisis, according to data released on Tuesday by the country’s National Statistics Institute.

Spain’s unemployment rate rose by 0.9 percentage points to a two-year high of 15.3 per cent in the three months to June — slightly better than the 16.2 per cent expected by economists polled by Reuters.

Meanwhile the number of people who were economically inactive increased by 1m to a record high of 17.6m, suggesting that many people had given up searching for work.

The job losses came despite the widespread use of a state-subsidised furlough scheme that has shielded millions of workers from the impact of the pandemic.

The scheme aims to limit the number of job losses as businesses faced forced closures to limit the spread of the virus. Some 1.8m workers were still receiving furlough payments by June 30, down from a peak of 3.4m in April.

This is the first time that Spain has made extensive use of employment protection schemes during an economic crisis. The country’s labour minister, Yolanda Díaz, recently said the government was likely to extend them until the end of the year and possibly into 2021 for sectors worst hit by the coronavirus crisis.

In the past couple of weeks Spain has reimposed lockdowns in several cities after the number of Covid-19 infections surged, raising fears that the country’s economy will face fresh damage.

“The tourism sector, which is a big employer in Spain, saw activity grind to a standstill and the renewed restrictions on international travel announced in recent days certainly bode ill for employment in the sector,” said Jessica Hinds, economist at Capital Economics.

She added that “the high prevalence of temporary contracts in Spain, and not just in the hospitality sector, has reduced the effectiveness of the government’s efforts to protect jobs”. Marcel Jansen, an economics professor at Madrid’s Autónoma University, warned that worse may be to come in the autumn, with the end of the tourist season.

“The labour market has been recovering relatively slowly, but the risks are very high,” said Mr Jensen. “We have tried to react to the crisis by reactivating the tourism sector and we’re seeing that the tourism sector — and bars and nightlife — are raising Covid numbers again.”

Any transition to a more selective or limited employment protection scheme risked raising unemployment further, Mr Jensens said: “Firms may then be able to return to regular practice and lay off the workers they do not need.”

According to forecasts from the OECD, Spain’s labour market is likely to suffer more than any other major developed economy this year. Spanish joblessness will jump to almost 22 per cent by the end of 2020, the Paris-based organisation predicts — and could rise as high as 25.5 per cent if there is a resurgence in infections. 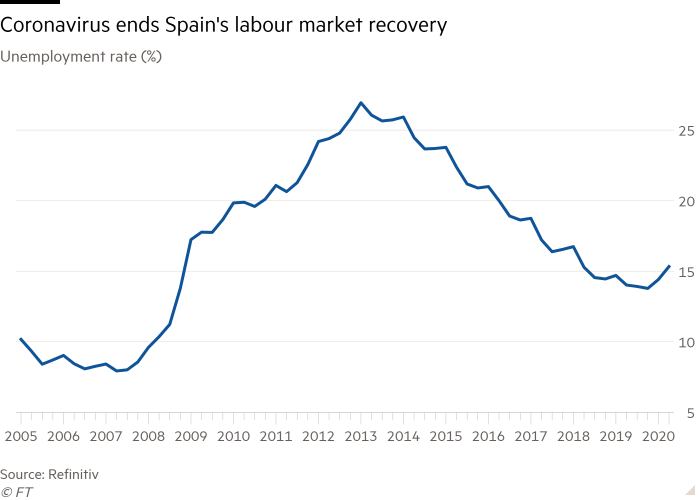 Angel Talavera, head of Europe economics at Oxford Economics, said that although the rise in job losses was the largest on record, it was relatively small given the likelihood that Spanish gross domestic product had contracted by between 15 and 20 per cent in the second quarter.

“The aggregate number of worked hours . . . fell 22 per cent over the previous quarter,” said Mr Talavera.