Hello from Brussels. A lot of interest here watching developments in the TikTok saga in the US. Tensions over data and security between Brussels and Washington aren’t exactly on the US-China scale, but the EU is still making menacing noises about American tech companies and it’s clearly an issue that’s going to escalate.

Meanwhile, we got the results of the first-round World Trade Organization director-general race on Friday, which sprang a couple of surprises. We have a look at them in today’s main piece. Our Tit for tat guest is Sam Lowe, senior research fellow at the Centre for European Reform, while our chart of the day looks at China’s rising pork imports.

Fox in the final five

“Nobody knows anything,” as the great screenwriter William Goldman (The Princess Bride, Butch Cassidy and the Sundance Kid, All The President’s Men) said about predicting the success of a movie. There aren’t many close analogies between Hollywood and the selection process for the WTO director-general, but we think we’ve found one here.

It was announced on Friday to no one’s surprise that the three favourites (Amina Mohamed, Ngozi Okonjo-Iweala, Yoo Myung-hee) had got through the first round. But two of the three longest-odds candidates (Liam Fox and Mohammad Maziad al-Tuwaijri) surviving got a lot of people in Geneva frowning at calculators and poring over maps of the world. Fox apparently impressed quite a few countries with his performance — UK politicians can do plausible articulacy if nothing else — and there is always a bit of British Commonwealth support kicking around. Plus, he has an accomplished UK Mission operation in Geneva campaigning for him. Al-Tuwaijri’s success is more of a puzzle — not “inconceivable!”, as one of Goldman’s best characters would have it, but still fairly unlikely — and few observers think he can keep progressing.

We’re not betting our house on predicting the next round, when the field is narrowed from five to the final two. But bookies’ odds and our conversations continue to point to Mohamed and Okonjo-Iweala as the strong favourites.

What to watch for now? For one, the probability of a veto rises as the field narrows. The selection continues to be made via a series of confidential individual consultations (not technically votes) by the “troika” of three WTO committee heads in charge of the process, led by David Walker, the New Zealand ambassador, who chairs the General Council of member countries. Walker is transparently both smart and an honest broker, which is just as well, since he has to do more than just count up the preferences.

David Walker, who chairs the General Council of member countries, is both smart and an honest broker, which is just as well because he has to do more than simply count up the preferences © Alamy

Although each member can back two of the five contenders in the second round, the final selection isn’t just arithmetic. The successful candidate has to “attract consensus” among the WTO’s 164 members — preferably also with a good spread of support geographically and between developing and developed countries. Contenders will struggle to overcome very strong opposition from a powerful member or a group of them.

Formally, there is no such thing as a veto, and Walker and his colleagues do not count negative preferences. As a nuclear option, a country can break consensus by refusing to support the final candidate backed by everyone else, but that would be extraordinary. In practice, however, if a big member such as the US, China, the EU countries (all 27 of whom have one consultation each) or Japan let it be known they strongly oppose a particular individual, the message will filter out and the candidacy is likely to stall.

Interestingly, the one big beast you would think might throw its weight around, the US, hasn’t shown signs of doing so. Of course, this is the Trump administration: they could do anything at any time with no warning. But no one has detected indications that US trade representative Robert Lighthizer has an insuperable problem with any of the remaining candidates, or will disrupt the process to make a point.

In fact, there seem to be no obvious heavyweight countries with objections to either Mohamed or Okonjo-Iweala, one of the reasons they are favourites. Not so Yoo Myung-hee, the Korean candidate, to whom both Tokyo and Beijing have reasons to object. Japan is engaged in a politically heated trade dispute with Korea that has gone as far as deliberate tech decoupling. China, aside from possibly regarding Korea as politically too close to the US, is less likely to be able to keep a Chinese official as one of the WTO’s four deputy DGs if another Asian becomes DG. Japanese officials have been telling everyone they won’t veto based on nationality, but they may be relying on the Chinese to do it for them.

As for Liam Fox, the mild affection felt for him by some of the smaller EU countries who miss the UK as a free-trade heavyweight isn’t exactly universal in the union, least of all in Paris. The Hungarian foreign minister, Peter Szijjarto, announced support for him yesterday, but there’s surely a large element of trolling the other member states there. If even a few big EU governments signal serious discomfort with Fox it’s likely to be decisive.

There’s a couple of weeks now before the next round ends, and no doubt lots of ill-informed speculation to come, to which we’ll try not to contribute more than we have to. After all, nobody knows anything.

China has nearly exhausted its reserves of frozen pork, according to new estimates that underscore the supply shortfall in the world’s top protein market two years after the arrival of African swine fever, write Hudson Lockett and Emiko Terazono. Pork reserves act to stabilise high prices rather than to provide a replacement for tight supplies. But despite inching down from their highs, spot wholesale prices are still more than double their pre-swine fever levels at Rmb47.61 ($7) per kilogramme. The shortage has forced China to import record amounts of the meat this year from top producers including the US, despite President Xi Jinping’s push for greater agricultural self-sufficiency. Pork imports hit 430,000 tonnes in July, more than doubling from a year before. 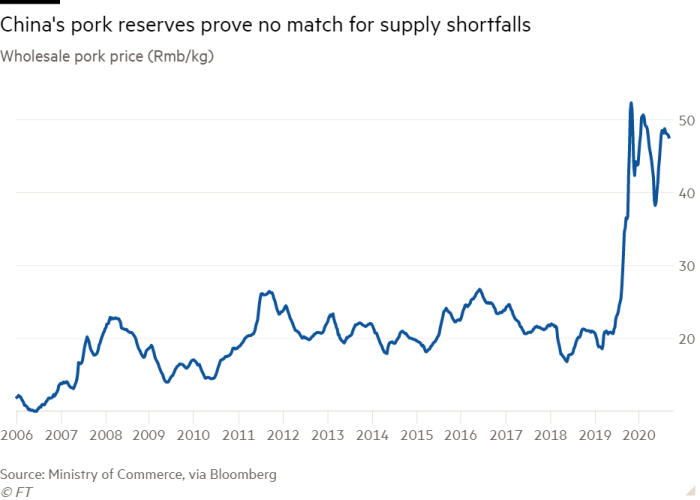 Do you think the UK really cares about getting a US trade deal?

Despite a trade deal with the US being popular with many in the Conservative party, it does not appear to be a number one priority for Number 10. Earlier this year, for example, the UK prioritised the speedy rollout of 5G telecommunications infrastructure — and the inclusion of Huawei — over the immediate relationship with the US (the UK’s position eventually changed, but this had more to do with events in Hong Kong and anti-Chinese sentiment driven by Covid-19 than US trade deal conditionality). The UK’s main issue is that the negotiation is not really with the US — it is with itself. The UK knows what it has to concede to strike a trade deal with the US, but making the concessions is likely to be unpopular at home. Or to put it another way: it’s not clear there are any votes to be gained from saying yes to chlorinated chicken and hormone-treated beef.

Why do you think the EU needs to ‘green’ its trade agreements?

Cynically speaking, the Mercosur association agreement, for example, has no chance of being signed off unless the EU’s environmental objectives are given greater prominence. We have already seen the EU make compliance with the Paris agreement an “essential elements” clause for future trade deals (allowing the deal to be suspended if there is a breach), but this will probably not be enough. Member states and the European Parliament are looking for trade concessions to be made conditional on compliance with a wider range of sustainable development criteria.

An interesting “green” issue that has been teased out by the EU’s trade negotiations with the UK is that existing EU FTAs inadvertently discriminate against the trade in electric vehicles. Simply put, the rules of origin criteria for cars make it incredibly difficult (if not impossible under some EU trade agreements) for EU-produced electric vehicles to qualify for tariff-free trade. This is due to the rules of origin criteria treating the battery (which makes up about 50 per cent of the value of an electric car) as foreign, even if it is assembled within the EU. The UK has reportedly proposed new criteria that would fix this problem, but the politics of Brexit make it difficult for the EU to engage. Regardless, this is an issue that needs to be resolved: it is not a good look for the EU to have FTAs that penalise trade in greener alternatives.

How significant is the UK/Japan trade deal?

Brexit was viewed by the Japanese and Japanese companies — who had invested in the UK as an entry point into the EU’s single market — as a breach of trust by the British. This FTA goes a little way towards repairing some of the damage and resetting relations. Inevitably, lots of people in the UK want to know if the FTA is better or worse than the EU’s with Japan. It is largely the same, but with some differences that arguably better reflect the UK’s priorities. On paper, the UK has slightly less agriculture market access than the EU — it has given up access to some of the tariff-rate quotas included in EU-Japan, and then resigned itself to the EU’s yearly leftovers in others. But the UK-Japan deal does include an ambitious digital chapter (unlike EU-Japan), liberal rules of origin criteria and slightly more generous provisions on the temporary movement of people, among other things.